It is impossible to ‘do’ such sites in one visit.

In fact, it is not possible to ‘do’ such sites at all.

If anything, they ‘do’ you, if you allow them.

As we were about to learn…

*The stone I was interested to get a closer look at is a,

one would hope,  carefully positioned, replica.

The original, carved stone, is now in a local museum for safe-keeping.

The orientation of the ‘tomb’ is, according to the authorities,

towards the midsummer sunrise, so time-wise, at least, we were half a year away.

But I think it is clear that something is going on here with sun and stone,

especially as it becomes obvious that a second outlier

in an adjacent field also lines up with the stone and ‘passage-way’.

All things which would have been missed

had we not returned when we did,

but the best was yet to come…

We had known for some time, courtesy of Rupert Soskin,

is part of a petrified tree trunk.

And once we had our eye in it became apparent

that other ‘chunks’ of petrified wood

had been used in the construction of this ‘chambered tomb’.

At least two, and almost certainly more, of the ‘entrance’

or indeed ‘exit’ stones and the lintel of the passage itself

readily conformed to the strange specification.

For us, this was very exciting, for while we may have been able

to extrapolate a workable symbolism behind the use of such material

for the stone of the inner chamber,

this symbolism was, perhaps, not so readily applicable

to the surrounds of the passage-way…

And was also, possibly,

an indication of a more utilitarian function

While Ben, fast becoming a folk hero, languishes in Bakewell Gaol, Don and Wen are on holiday… or ‘on the run’ if Bark Jaw-Dark and PC 963 Kraas, hot in pursuit, are to be believed.

From England to Scotland and Ireland, the officers of the Law follow the trail of the erratic couple.

But who is the shadowy figure, hovering beyond sight?

“Now slowly, gently, return to the Circle, carrying the vision of Light within. Return to your body… meld with it once more… Allow yourself to feel your chest, rising and falling as you breathe… your feet on the green earth.”
Warm, in Jaw-Dark’s hand, the crystal seed pulsed with life. “In the monstrous tyranny of process,” he said, “‘what is’ is next to ‘what was’, and ‘what is no longer’, while ‘what never was’ but ‘what could have been’ and, perhaps even, ‘what should have been’ is that much stronger…
“What seems complete,” said Kraas in the way of some sort of response, “may only be divisive, and ‘the half of it’ might in fact be whole.”
“Good,” said Weston. “Does anyone have anything else to add?”
“Ben’s out,” said Sams.
“Yes, I got that impression, too,” said Weston.
“I have one for Mark,” said Prufrock.
Jaw-Dark placed the crystal seed, still pulsing with life, flat to his heart centre.
“Long before the Pueblo Indians of Central Mexico learned to cultivate maize, they grew green kidney beans as a staple,” said Prufrock. ““Three beans magical,” said the witch doctor in the marketplace, circumspectly discarding those with a flawed casing. By sleight of hand he made many beans fall from those three.”
“It is going to rain heavily,” said Jaw-Dark, matter-of-factly.
“Looking at that black mass of cloud gathering over the horizon, I’d say you were right,” said Kraas.
“If it’s the storm from last night we wouldn’t want to be caught in an exposed location,” said Prufrock.
“There was a storm last night?” said Kraas.

“Not where we were,” said Prufrock… 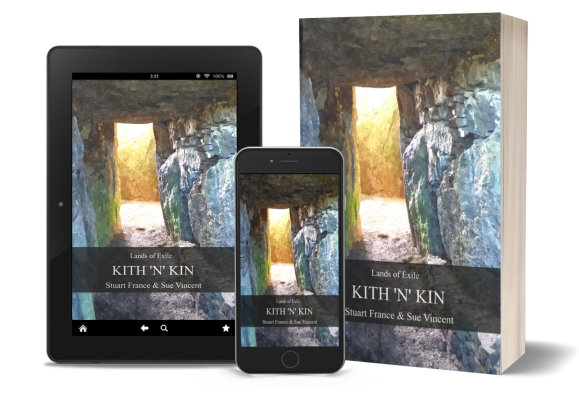 One thought on “Inner Sanctum…”