Gilgamesh and Enkidu journey into the wilderness; pursuing the king’s desire for personal glory, the two have left Uruk to seek out the ‘forest demon’, Humbaba. Gilgamesh has vowed to kill the demon and cut down the Great Trees of the forest, seeking to prove his own might and carve his name in the annals of memory.

His mother, the goddess Ninsun, had blessed the two brothers in arms before their departure… but had offered advice; the gods know the value of free-will and the necessity of choice. His people had begged their king to set aside this quest, and he had scoffed, having no value for the opinion of those he should have served. Even Enkidu, who had stood beside him on many a quest, tried to persuade him against the journey, knowing that the apparently fearsome Humbaba is none other than Huwawa, the Great Spirit of the Cedar Forest. Gilgamesh chose to see only cowardice in his brother’s concern, shaming and manipulating him into agreeing to the quest.

Friendship with Enkidu had appeared to temper the ego and arrogance of the King, but the ego, jealous of its standing and self-image, continually strives to reassert itself. Gilgamesh, who has been hailed as the greatest of kings and the mightiest of warriors, has never consciously questioned his own supremacy… yet the heart of arrogance is shaped by insecurity and feels a constant need to prove itself to itself and all others. On the journey into the wilderness, Gilgamesh begins to show his true colours. 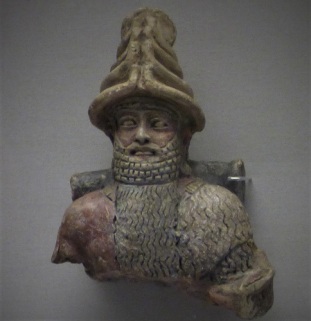 As they travel towards the Cedar Forest, Gilgamesh and Enkidu take it in turns to watch and to rest, unaware that, even here, they are within the realm of Huwawa, whose influence permeates their dreams. When Gilgamesh sleeps, he denies remembering any dreams, although Enkidu seems to have shared them as a half-waking vision. When Enkidu sleeps, the dreams are his alone.

Each dream is the same in essence… the two warriors are walking through a valley between two mountain peaks. Above them, the sun blazes, each time a different hue, bringing destruction. Each time, the two are lost from the valley.

In the first dream, says Enkidu, a white sun bleaches the valley. He believes it to be a bad omen for their quest, but Gilgamesh dismisses his fears.

In the second dream, a red sun withers the land. Enkidu fears that the dream is a warning against their quest to slay the divinely ordained Guardian of the Forest, Huwawa. Gilgamesh once again dismisses the dream, saying that the red sun is Humbaba, the demon, who they will break with their own strong hands.

In the third dream, a grey sun fell from the sky, subsuming all beneath it. He again tries to convince Gilgamesh that their quest is misguided, but the King, calls it nonsense; the grey sun is the demon they will divest of his ‘ill-gotten gains’.

In the fourth dream, an orange sun broke into falling fragments, crushing all who walked beneath it. Once more, his fears are dismissed by the King, and, with each dream, that dismissal becomes more pointed, manipulative, highlighting Enkidu’s apparent lack of courage.

In the fifth dream, a green sun fell as a shower of leaves, suffocating all below. Enkidu states his belief that their quest is doomed to fail… and Gilgamesh barely restrains his accusation of cowardice.

In the sixth dream, a yellow sun blinked out from the sky, leaving all below in darkness. The valley no longer existed. Enkidu believes that the slaying of Huwawa will destroy the world… but once again, Gilgamesh ridicules his fears.

Closer they come to the Cedar Forest and, finally, they hear a thunderous roar and confront Huwawa. His aspect shifts and changes, cycling through the many faces of Nature. He calls them fools… and tells them to prepare to die.

There is no longer any other choice for Gilgamesh and Enkidu…all choices have brought them to this moment and it must be faced. Bowing to the inevitable, Enkidu tells Gilgamesh that they must strike now, before Huwawa enters the depths of the Forest, enveloping himself in his seven auras, for here, the Spirit of the Forest wears only one.

Neither Gilgamesh nor Enkidu realise that, as they had slept and dreamed, Huwawa had come to them as a shadow. With each falling sun they had dreamed, he had removed a Veil from Enkidu, stripping him of the colours of the gift of life, bestowed by the gods and the hand of Shamhat. Only  the black Veil remained.

A mighty battle ensues… the clouds turn black, fog shrouds the Forest,  the winds blow in from the four corners of the Earth… until, finally, Gilgamesh and Enkidu prevail. But, as the final blow is struck and together, the warriors raise the severed head of Huwawa, Enkidu stumbles and falls. The life within him has gone and, with the dying of the Spirit of the Forest, Enkidu is dead.

Not in grief, but in anger, Gilgamesh takes up Enkidu’s weapon and attacks the Great Trees of the Forest. But, as he hacks at the wood, destroying their physical form, the Trees withdraw their life and the gods move to protect their essence…for nothing is wholly lost to existence, even when its form is destroyed.

Gilgamesh did not stop until the outer form of the Cedar Forest lay in splinters around him. Only then did he gather the scattered Veils and, casting them over the form of his dead friend, begin to mourn…

9 thoughts on “Lord of the Deep: True colours?”