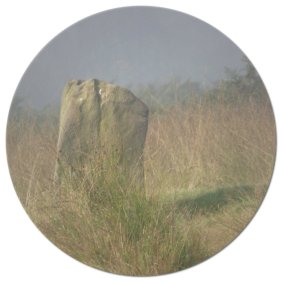 ‘In former times the soul was feathered all over’

The third ritual of the workshop weekend was named Deadshaw Sick after the strip of land that divides the lands of the living from the lands of the dead at Barbrook. On one side of the stream are the hut circles that mark the place of a settlement, on the other, the stone circles and cairns of their dead. It was there that the Seer had come into consciousness, and there too that we had spent a strange afternoon after the previous workshop. The land had seemed alive in an indescribable way, as if we had somehow ‘lost’ centuries and were vouchsafed a glimpse into a distant past and the stone circle ‘showed’ us how it could have been used. On that day, the land itself formed the ritual space of purification and offering and we could see quite clearly how it lent itself to the needs of the Seer…  but that is another story. Seated on the Companion Stone, we had, in a matter of minutes, mapped out the entire workshop in great detail… detail that was almost immediately lost. But the seeds had been planted and ideas sown that would, in the way of such things, germinate in their own time.

Like flowers, ideas respond to the conditions in which they grow and to what elements are brought to bear on their  evolution. Much of the workshop had to wait to be written until thoughts, strewn as unidentified seeds across the landscape of possibility, revealed their inner nature. Some things could not be written until they were understood… others could not be understood until they were written. Others still may not be understood until they are brought into being in our lives. It was a waiting game… elucidation came in its own time and under many guises, impossible to predict where, when or how the ideas might bloom.

One idea we wished to carry into the temple was that of divination. Bratha, whose name, as far as I can discover, comes from an ancient word for ‘knowledge’, was a seer to her people. They lived at a time when technology meant stone… from the tools of everyday living to the cairns and circles of their rites. We had, on that strange day after Leaf and Flame, gathered heather-wood amid the cairns, thinking to carve divination sticks from their twisted forms. Every time I tried to work on them, I seemed to get distracted…until we realised that wood had more to do with the story we had just told than the one we were yet to tell.

If Bratha’s people had used stone for all else…what else would they use for divination?

We gathered crystals instead.

Melding the traditional attributes of the crystals with the characteristics attributed to the higher spheres of operation of the nine stations of the enneagram, we devised a table of meaning and a mode of divination that we played out, within the circle of stones, during the Circles Beyond Time weekend. The questions that were brought to the seer were not voiced to her, as she would have been no more than a conduit. The answers given were taken from the stones… the seer would herself have listened, to stone or to ancestral echoes perhaps, and the querent would find the meaning within the answer…an answer that sought to elicit the truth they already held within them, rather than to impose an external interpretation that might have little relevance and less value.

Signs, dreams, symbols, portents and the many methods of divination, all share a common thread… they speak to us in ways that are uniquely personal if they are to have any value. It is of little use to  learn the ‘rules’ and stick to them; while there seems to be a universal understanding of symbolism at an intuitive level, the cultural, temporal and geographical differences within which we are raised will each add their own shades and colours to the emotive response such things awaken in the individual. Their value resides in what these things may  awaken within us or can open in our hearts and understanding. A stone is neither more, nor less, than a stone, until we give it meaning.

Yet there is something else at work too… an unseen presence that seems to evoke synchronicities that we can neither miss nor ignore, that guides the hand or allows us to notice the flight of a bird across our path. When the seeker seeks, on whatever path he may follow, a portal is opened between the ego and the Self and, for a brief moment, the two may commune in harmony, combining the essence of the human experience with the flight of the soul, each shedding their own light and clarity on the moment. The heightening of awareness allows us to see beyond form and interpretation to glimpse what is true, though how, whether or when we can accept or understand it depends upon where we are on our individual journey. As humans we can be very good at fooling ourselves, convincing ourselves of things that are not. We may even fool others for a time.. We take the fragments of truth that we garner and build for ourselves a version of reality in which we live out our days, calling it ‘ours’. But the feathered wings of the soul carry us towards Truth itself. We cannot fool the essence of our Being… and Truth belongs to no man… only to itself.