Where were we, before time and other concerns overtook me? I was sharing the weekend in the north… the one with all the heather in bloom. We had found a lost stone circle and failed to find our fairy woman and her ice-cream van… There was only one thing for it at this point… we needed a pub and a prison. We headed on down into the village and seated ourselves outside the Devonshire Arms which, to our delight, had suddenly begun to serve Guinness and decent cider again… There was a reason for our surprise, as the occurrence was rather wierdly mirroring our current topic of conversation… the plot of our next book.

This fact had not escaped us as we sat beneath the parasol watching the drunken wasp, rescued from my cider, skeeter happily sideways across the table. A pot of homemade lemon and ginger marmalade was acquired from one of the cottages before we clambered back in the car … we needed a gaol in which to incarcerate a friend. Not what you might think, I hasten to add; we needed an image for the Black Shade … and we had seen just the spot out at Edensor.

The village of Edensor lies on the road that runs through the grounds of Chatsworth and is built with a rustic elegance that sits harmoniously within the grounds of the great house begun by Bess of Hardwick in the 1560s. Our focus was a turreted building we had spied on the way through to the moor, but as there is also a church there, it would have seemed churlish to simply click and run, especially on such a beautiful day.

The church sits high on a mound above the village. Neither are what you might call indigenous. The original village was right next to Chatsworth, but was moved out of sight of the house, over a hill in the mid 19thC by the Duke of Devonshire and the 12thC church that had once stood on the spot was replaced by a new one designed by Sir George Gilbert Scott… a name we have come to know well on our travels.

The church seems typically Victorian from the outside. It is only as you approach the porch that things begin to get a bit more interesting. First there was the little plaque commemorating the planting of a yew tree by the Duke, to mark both his 80th birthday and the millennium fifteen years ago. The yews are such an important part of our folklore and our churchyards that it is good to see this sapling growing here.

Then there was the sundial.. which, of course, isn’t a sundial at all, or rather, probably never was to begin with and the five foot tall column may be the shaft of a more ancient standing cross. Certainly, given the height of the ensemble atop its steps, there are few who could read the sundial with any ease… 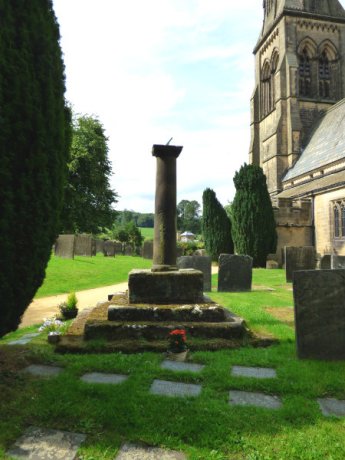 We wandered towards the porch through the churchyard where almost all the Dukes are buried in surprisingly simple graves. Buried here too is Sir Joseph Paxton, a gardener who oversaw the new village of Edensor, but who was best known for designing the Crystal Palace… a vast structure of glass and steel… for the Great Exhibition of 1851. Perhaps the most visited grave however must be that of Kathleen Kennedy, sister of U.S. President J.F. Kennedy. Kathleen, Marchioness of Hartington, had married the brother of the present Duke. She and her husband married in 1944. Five weeks later, William was posted to serve in Germany during WWII where he was killed by a sniper, just a month after Kathleen’s brother, Joe Jr was killed. Kathleen herself was killed in a plane crash in 1948, aged just 28. A plaque commemorates the visit of President Kennedy to his sister’s grave in 1963, shortly before his own death.

We were not to get inside the church this time… a christening was about to take place and the guests were gathering. Opening the door for one old lady to enter gave me a glimpse of magnificent stained glass and possible reasons to come back; Scott incorporated many features from the original church into the new one, including the Norman carving and medieval grave-slab of the porch. 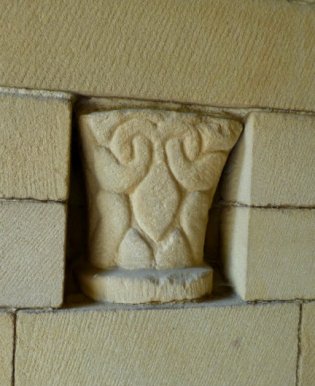 All we could do was wander back to the car. The day was still beautiful… the heather in bloom and it was early afternoon… it wasn’t as if we would be stuck for places to go… we just needed a place that would have an ice-cream van and as luck would have it, we knew just where to go…