On a rather bleak day, when I was feeling low for some unspecified reason, the first complete chapter of Dark Sage landed in my inbox and had me laughing out loud. The story that began in The Ætheling Thing is developing beautifully.

Now, I suppose I shouldn’t say it, but I really love these books. It isn’t just the writing of them… which means the living of their story first. Or the research… which takes us out into the landscape and chasing through history. Or the laughter and the succession of pubs that go into their writing. No matter how often we read them we find they lead to new discoveries, which is odd when you are the writers. There is so much in there!

You might think it would be fairly reasonable for each of us to find things in what is written by the other, but it isn’t just that. We find stuff in what we ourselves have written, largely I suppose because of the context… the framing thoughts that build up around them, the research and the discoveries we make and the ensuing discussions that usually last until the early hours of the morning. There is a cross-fertilisation and what one of us brings to the mix seems to illuminate what the other has laid on the table.

That, I think, is how learning works, adding layers to a seed idea until it takes on form and substance, accumulating myriad correspondences and associations until understanding sets in and takes you beyond simple knowledge towards understanding. So the more I read the books, the more I see and learn.

It began with our visit to Uffington and Wayland’s Smithy in Wiltshire, sacred sites from the earliest history of our land and its people. We didn’t realise at the time where it would lead, we knew only that we had shared a truly magical and unexpected experience in the mists. A gift. The first of many. From there the history of our land seemed to respond to our interest, dropping jewels in our lap at every sortie into the landscape, from the sacred sites of pagan worship to ancient churches that now stand on the white hills or in the green henges of our ancestors.

Entwined with our travels and discoveries is the story of a nascent mystery school, taking its first steps into the world after its long preparation, something that is just as deeply entwined within us. Then there is the story of a friendship and Don’s quirky relationship with Wen’s dog. There is laughter and tears, serious philosophical debate, ancient history and mystical symbolism and the visionary passages that took us both by surprise and taught us more than we’d bargained for. And then, of course, there are the birds… and it is only looking back through the pictures of that first misty morning that I realised I had caught the first buzzard on camera.

It seems incredible to think that we celebrated the publication of The Initiate on my birthday last year and now our fifth book together has begun, not quite a year later. When we first put pen to paper we had little idea where it would go… we weren’t even sure we would get one book out of our adventures… and now we already have so much we know we will not be able to get it all in this one either. As soon as we push the door ajar on one myth or mystery a whole corridor of portals seem to open up that simply cry out to be explored.

For myself, I can honestly say I’ve never had this much fun learning in my life.

That, I feel, comes from the living of the books. Don and Wen are not Stuart and Sue, but there is much of us in them, and much of them in us. Anu, of course… well… that’s a different story. Yet the stories are real… the events described are largely as they happened, the conversations echo our own… and the adventures? 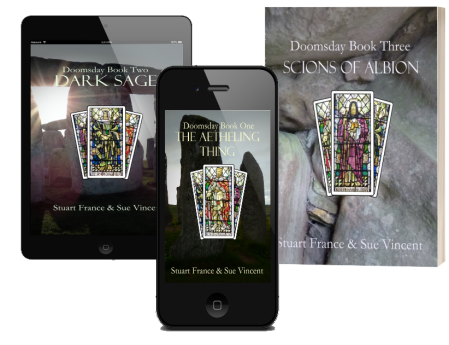 All books available via Amazon in Paperback and for Kindle

Don and Wen, following the breadcrumb trail of arcane lore and ancient knowledge, scattered across the landscape of time, turn their attention to the myths and legends of Old Albion. They delve into the tales of King Arthur, asking some very strange questions about biblical family trees and exploring the many stories that abound in the very landscape of Avalon. Meanwhile, in Derbyshire, the voices of the past still whisper from the stones, opening a passage through time, place and memory to another world…

How is it possible to hide such a story… the hidden history of Christianity in Britain? Oh, there are legends of course… old tales… Yet what if there was truth in them? What was it that gave these blessed isles such a special place in the minds of our forefathers? There are some things you are not taught in Sunday School. From the stone circles of the north to the Isle of Avalon, Don and Wen follow the breadcrumbs of history and forgotten lore to uncover a secret veiled in plain sight.

Doomsday: Dark Sage
…. something was spawned up on the moor… something black that flew on dark wings. It heeds not time or place… but it seems to have developed a penchant for the travels of Don and Wen….
“Are those two still at it?”
“Apparently….”

Things are getting serious…

Exactly what is Wen doing with that crowbar and why is she wearing a balaclava?

All will be revealed…or will it?

Follow the story begun in The Initiate and the Triad of Albion,

as Don and Wen explore the ancient land.