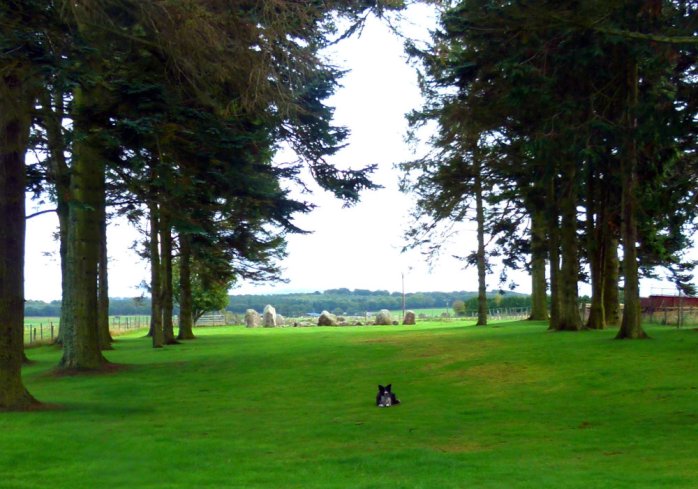 The weather was beginning to regain its composure, but it was still being temperamental enough to lustrate the companions exploring the mysteries of an ancient landscape. Our next site was not far distant and it was not long before we gathered at the entrance to Cullerlie Stone Circle, the Standing Stones of Echt. We were greeted by the guardian collie, who was evidently torn between the innate need to herd the wandering group of humans and the sure and certain olfactory knowledge that at least half of them had treats in their pockets and the hope that a fair percentage could be induced to throw sticks.

Even so, there was a ‘rightness’ about his presence as he crouched, poised, between us and the stones. About the only thing that did feel right. And that was odd. The wide, open valley gives clear views for miles, broken only by the trees and a few farm buildings. A green lawn leads up the neat avenue of trees to the stone circle, just a short walk from the lane. It is a beautiful prospect. Yet, even from that distance, it didn’t have the right ‘feel’.

The most obvious reason for that was clearly visible on the information board… the circle looked like a pizza, pockmarked with cairns. These cairns would once have been mounds of stone, quite tightly packed into the enclosing ring of the original circle, effectively preventing it for being used in the manner for which it was intended. We may not know all the uses to which these circles were put, nor how rituals were conducted there, nor how they were used as part of the daily life of the community… bit we do know that the central space was crucial to at least some of their purpose.

The University of Adelaide reported last year that it had conclusive proof of what many less officially erudite people have known for a very long time… that the stone circles are constructed with astronomy and planetary alignments as part of their design. The majority of these alignments can only be used from within the circle… so why would anyone destroy that purpose? It was something to ponder… 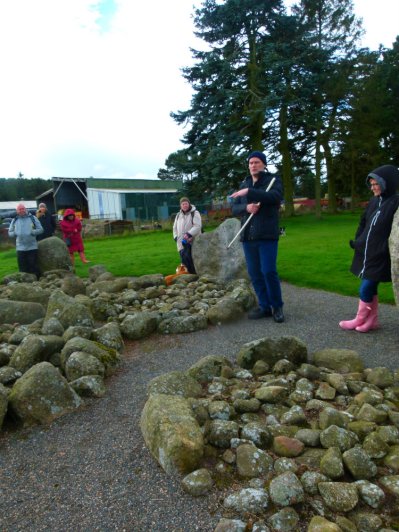 Another reason for the strangeness of the place may have to do with the landscape itself. All the other circles we had visited were just below the horizon of a hill. These circles never stand alone in the landscape and cannot be seen as separate from it…they are one with it and use its contours as part of the design. Distant hills that form shapes suggesting the body of the Earth Mother… the goddess… even their relationship with the horizon itself, are all part of the way they work. We have often seen the effect referred to as ‘mirroring’, but which we call shadowing…for a mirror reverses the image and the stones do not…  where the standing stones themselves echo the shape of the hills. We believe that, in the true tradition of sympathetic magic, those who worked within the circle sought to affect conditions in the wider, macrocosmic landscape by working within their constructed microcosm.

The circles themselves seem to shadow reality. When you lie on your back in an empty landscape and look up at the sky… especially when the stars wheel overhead… you see a circular horizon, as if the arch of heaven is an upturned chalice. It must be remembered that we, in this small and overworked landscape, seldom see the land untouched by the hand of man. Plantations of trees, contours flatted by centuries of ploughing or five minutes with a bulldozer, quarried hills and constructed mounds… let alone our town and cities… none of these would have been there for our ancestors. The chalice of heaven cupped an unsullied land, where only small clusters of dwellings and the great standing stones attested to Man’s presence. 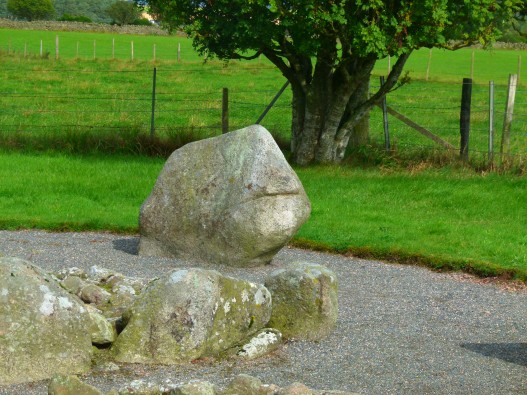 Another possible factor in the feeling of oddness may be the bedrock… there isn’t any. The other stones circles were built on ground underpinned by solid rock while Cullerlie lies on gravel. Stone is a crystalline substance and, leaving aside such things as their healing properties for a moment, like everything else in this world, they have a unique vibratory signature. When speaking of the properties of stone and crystal, our language often uses terms more readily associated with music. I have a pet theory that when we are born, we are ‘tuned’ to the specific vibratory frequencies of the bedrock and that is one of the reasons for feeling at home in a place… because we are on bedrock with a similar or harmonious frequency to that of our birth. I am no expert with either crystals or music, but it would make logical sense of crystal healing too, if the different types of stone act as ‘tuning forks’ or add their note to dissonance to create harmony. If gravel is made up on many types of fragmented rock, I can imagine cacophony.

It was noticeable that most of us hung back. In stark contrast to the previous circles, there was a distinct lack of eagerness to enter the circle. I, for one, did not wish to amplify the unease by standing with a stone and chose, instead, a space on the perimeter.

Cullerlie is a Bronze Age circle with eight smallish standing stones, the tallest being less than six feet high, and forming a circle thirty-three feet in diameter. Within, there are eight circular cairns in which cremation burials have been found. In 1820, James Logan recorded nine satellite cairns, but by the excavations of 1934, no trace of them remained. 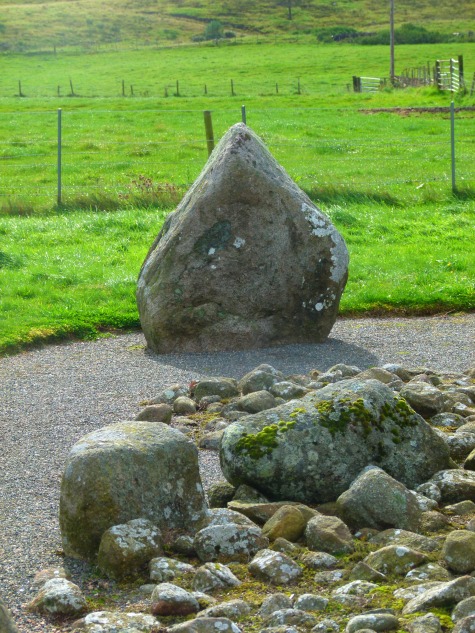 It would appear that the main stone circle came first, with the cairns being of much later date. There are cup marks on some of the standing stones…and again, looking incongruous as if the stones had been repurposed from an older construction, on the kerbstones of the cairns. Oak, hazel and willow charcoal have been found… all three of them ancient sacred woods… where the land was levelled and burned before construction began. Were the fires merely intended to clear the vegetation, or was this some form of ritual purification? And why did they fill a sacred space with burials?

It may be as simple as an evolution in their practices, in much the same way as we see in our ancient churches, where the needs of the community have brought playgroups and kitchens into the nave to sit side by side with Elizabethan tombs and medieval wall paintings. Somehow, I don’t think so. Stone circles are never graveyards. There may be the occasional burial within them, but these seem to have another purpose, perhaps sanctifying the ground,or maybe honouring a person important to the site and its clan. Here, it seems as if the circle was deliberately closed. Had some catastrophe so decimated the community that, in a short-lived time, knowledge of the circle’s true purpose had been lost and only its sanctity remained? Were the dead placed within the circle to guard the stones? Or for the stones to guard them? For it is curious that so many stone circles survived, unharmed over the millennia by invaders and a changing religious ladscape. Maybe the answer we choose depends upon whether we stand outside, looking in… or inside, looking out. 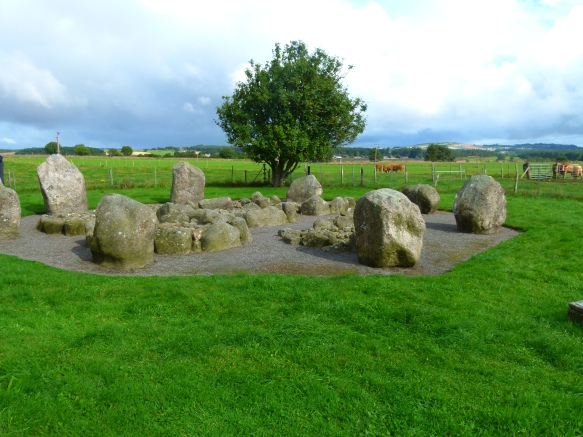 16 thoughts on “Solstice of the Moon: Circles of Pain”