‘If you have not lived through something it is not true’

The fourth ritual took us to a place of fear. Within the local landscape there is a high place that had, for a long time, remained hidden from notice, even though we had passed it many times over the years. It was never hidden from sight… there are no trees to give seasonal camouflage, no houses or obstructions…it was only, somehow, hidden from awareness. Even though we must have seen it, the mound had never impinged upon consciousness. And it is really too big, too imposing, to miss.

It was inevitable that, once noticed, we would visit the site. The story that was born of that first encounter has been told elsewhere. The encounter itself was unlike any other, beginning an unease that grew with each successive visit and leaving me an emotional wreck. The tale that the hills whispered would furnish the inspiration for the fourth ritual.

Prior to that, however, Morgana was to speak to the group of soul-lineage and the work of the psychopomp. It was one of the many striking synchronicities of the weekend. We had issued the invitation but had no idea what subject she would choose, what she would say or how she would present it. The subject could not have fitted more perfectly had it been pre-planned and scripted… and the symbols beside her as we walked in, black  and white, would exactly mirror what we had planned for another unscripted sequence in the very next ritual and about which only two of us knew. In such seemingly impossible ‘coincidences’ there is a reassurance that we are doing something right. 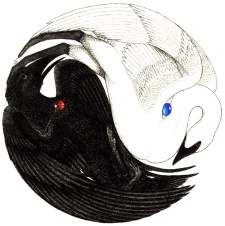 Fear was addressed on many levels throughout the weekend, from the fragilities of the ego that affect our day-to-day lives and the way we perceive the world, through to the deeper, often unspoken fears that hide in the shadows. Morgana spoke of death and dying and, for many those are the ultimate fears.

To those for whom death itself holds no fear, the manner of dying is one of some concern. We seldom have a choice in the manner of our passing and for most, if not all of us, there is the conscious hope of a gentle ending for ourselves and those we love. Death itself may be feared because we do not know what lies beyond… it is unknown territory and even our certainties cannot be proven before we pass beyond that veil. Death may also be feared because we cannot imagine a place or state of being when we are not. The ego is designed for life; it clings to its familiar state of being and, for existence to continue without its presence in some form or another, is an unencompassable idea to many.

The initiatory theme of the ritual took us to a place of fear… and moved beyond it. The word ‘initiate’ means ‘to begin’  or to ‘set in motion’ and, as there can be no beginning without the ending of a previous state, the symbolism of death and birth into a new state of being, of the fear and its facing, is an apt analogy. In the Tarot, the Death card symbolises not only physical death, but also endings and change… and a change is a new beginning.

Our society has, in many ways, become inured to death. It’s horrors are so often in our homes through the news and media, both in reality and as ‘entertainment’, that we no longer recoil from many of the images with which we are confronted. Yet both the fear and the mystery of death remain.

Before the workshop, I spoke with someone about the value of life and, in particular, about the role of its limits. Would we achieve anything much if we were immortal, beyond the ability to perfect the art of procrastination? With unlimited time, would we seek a cure for cancer or a path to peace? Our limitations may give our lives meaning. By being aware of and accepting our mortality, we create a virtual time machine for ourselves. We are all aware of how time itself seems to slow or speed up depending on our levels of boredom or engagement with the moment. By acknowledging the finite nature of our lives, time takes on a new level of meaning and we live each moment with greater intensity. Kahlil Gibran said, “It is life in quest of life in bodies that fear the grave.” The sadness is that our very fear of death is caused by our consciousness of life and, in turning away from its inevitability, perhaps we are also failing to embrace life as fully as we could.

11 thoughts on “The Feathered Seer – The bitter drop”