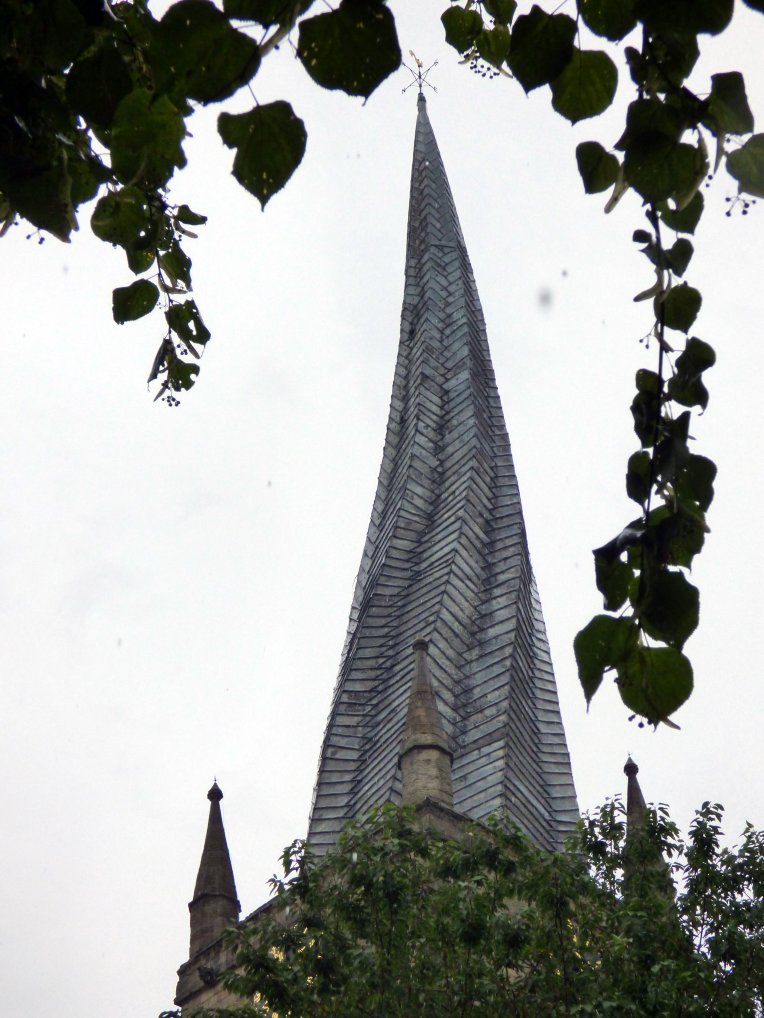 We were determined not to get wet, so we went to Chesterfield, on the general principle that there would be both indoor parking and a cathedral big enough to keep us both dry and occupied for some time. We got those points right… but we failed miserably in the staying dry department as the heavens open and the chill, northern rain pelted down. As my companion made a judicious dive for the porch, I found a convenient tree under which to shelter the camera and get some shots of the famous crooked spire. 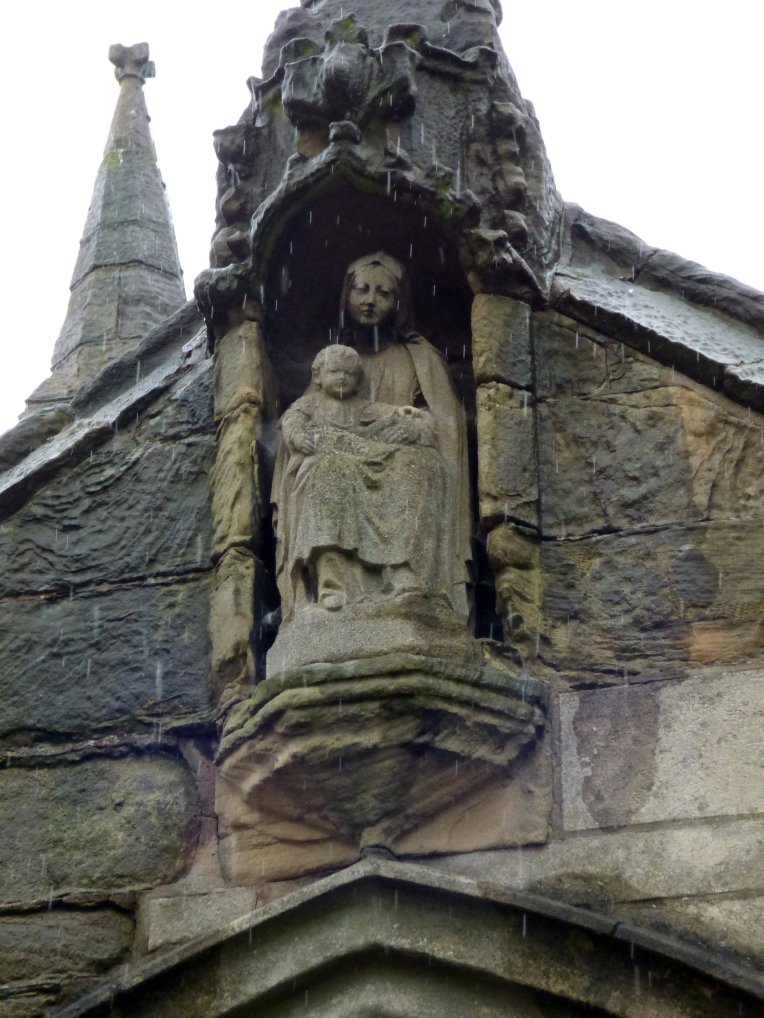 The church dates to the 13th Century and the tower was added in around 1362. The tower is twisted by 45 degrees and leans 9’ 6” from true centre. Several local legends tell how it became so contorted, many have to do with the Devil and the purported virginity of brides. Wikipedia says : “One well established legend goes that a virgin once married in the church, and the church was so surprised that the spire turned around to look at the bride, and continues that if another virgin marries in the church, the spire will return to true again; with only 3 weddings in 2010 in the church it seems that this legend understandably discourages marriages at the church. Another legend is that a Bolsover blacksmith mis-shoed the Devil, who leaped over the spire in pain, knocking it out of shape.” There are others, and it is well worth looking some of them up. 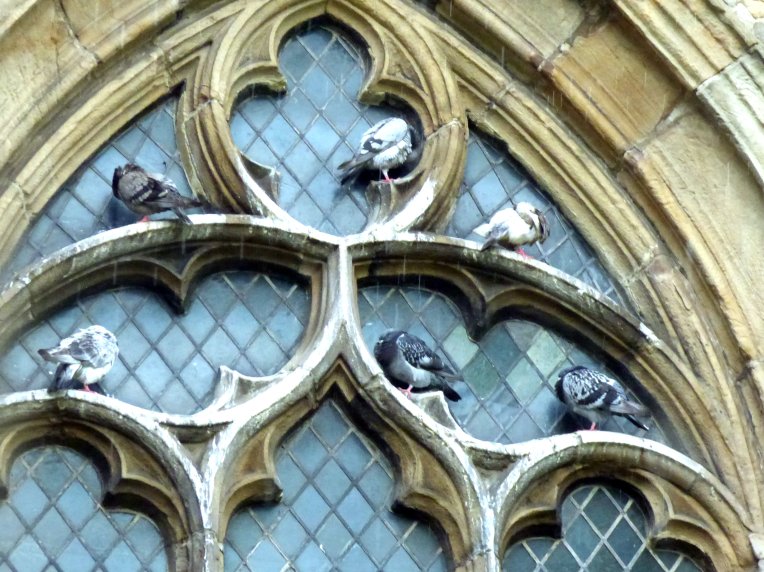 I didn’t linger too long under my tree. It was raining quite heavily and my feet were already squelching in the little slippers I habitually wear for some strange and unfathomable reason. You would think I would have learned by now… Even the pigeons had given up and had taken shelter where they could, so I too followed their example. 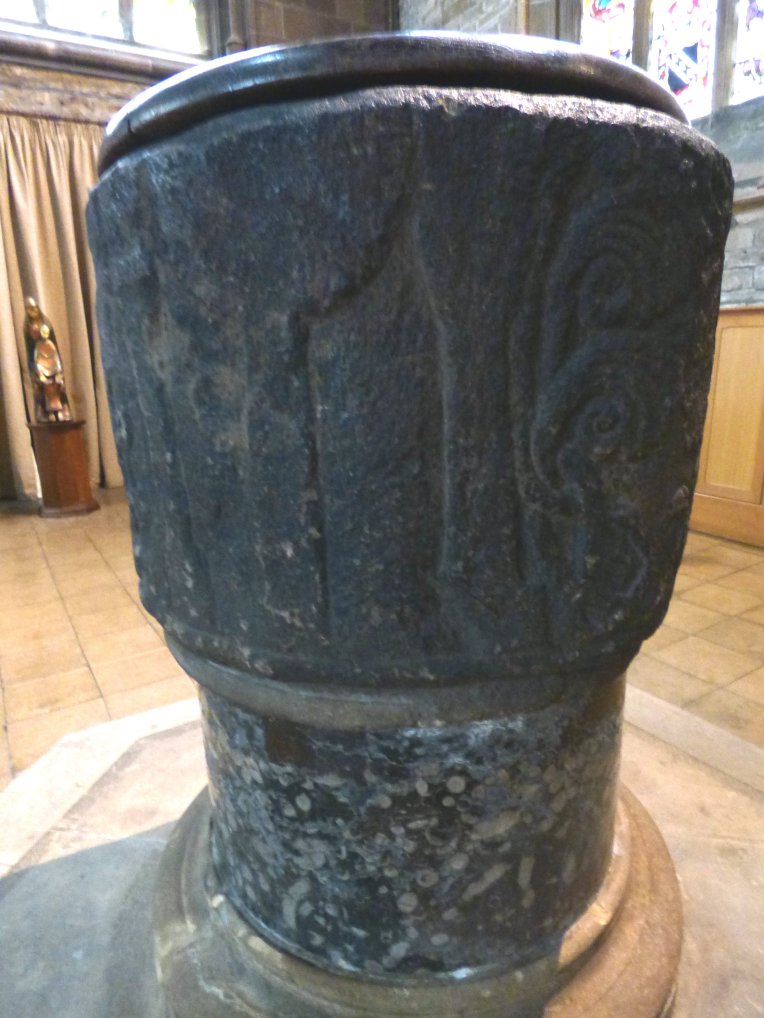 For all the church has been embellished over the centuries, being the foremost building in the area, it still retains its atmosphere of calm peace, and every nook and cranny inside hides symbols and artistic treasures, bits of history and the evidence of the faith of hundreds of years. 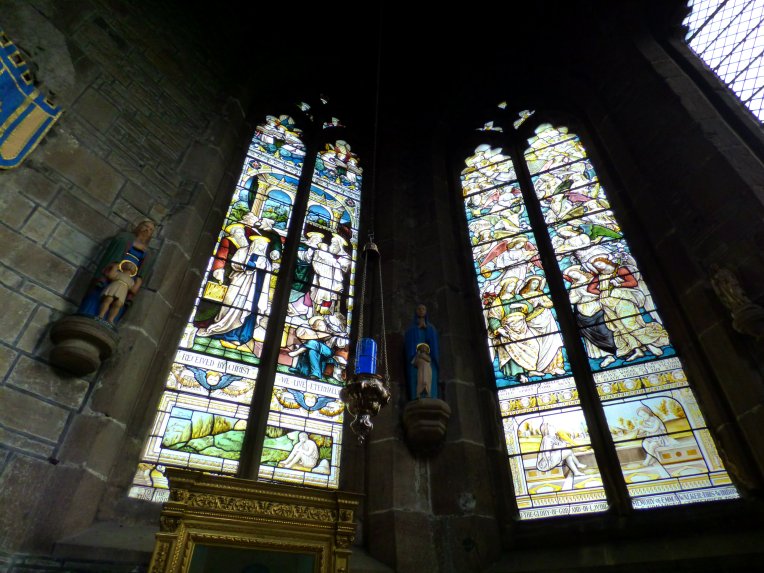 The Lady Chapel, as so often for me, had the most attraction, and a curious Revelations window in the north chapel too had us thinking. There is an eclectic mixture of styles here, from a dreadful neon cross to lovely sculpture with an African feel, from medieval marble tombs to a modern St Francis window full of gentleness. 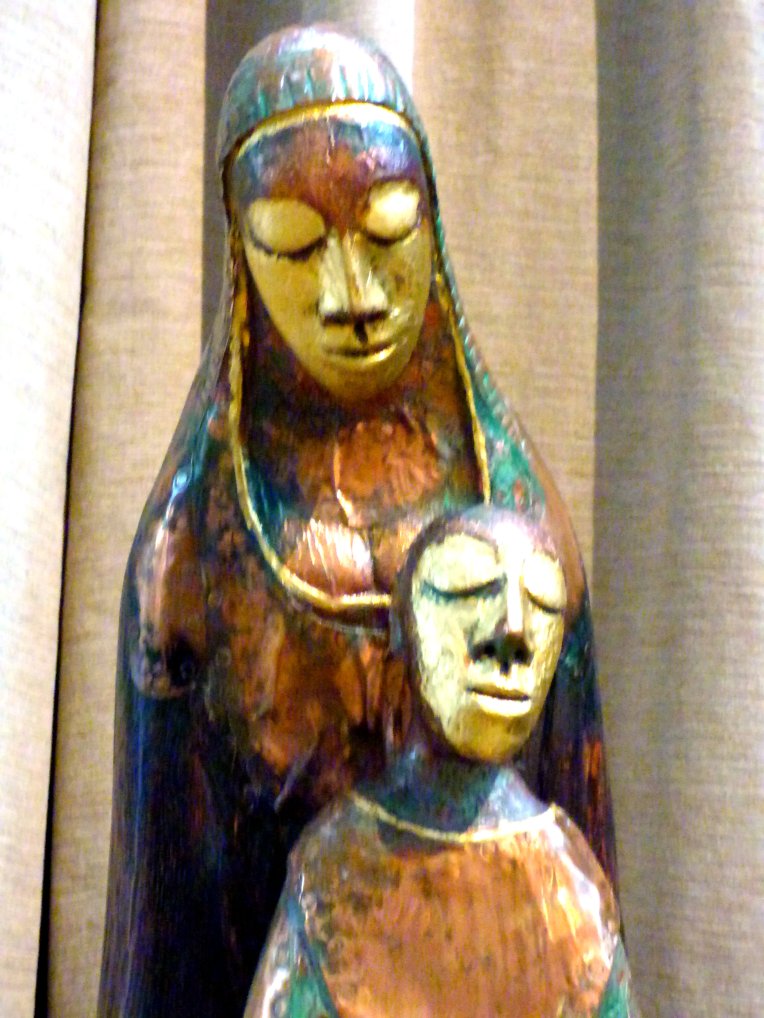 The place was full of visitors, though, and that always ends up with me documenting as much as I can with the camera while my companion wanders in search of his own inspiration… we then adjourn, usually to a local pub, and compare notes; knowing we have enough to go on in order to make a decision about coming back on a quieter day. It is these subsequent visits where you begin to really get to know a place, both by its details and by its feel. 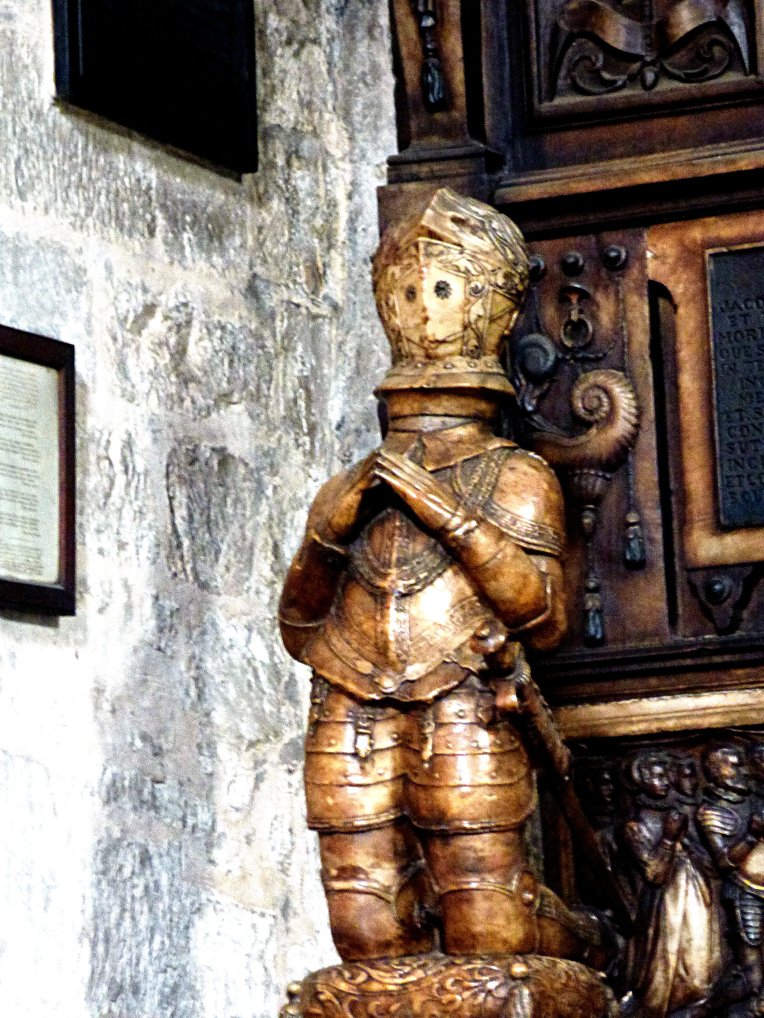 Today was no exception, but, unfortunately for us there was a bookshop and we became a tad sidetracked as we delved through the shelves, exiting with what rapidly became known as the Book of Assassinations as we trawled its pages under an awning while the rain still fell. 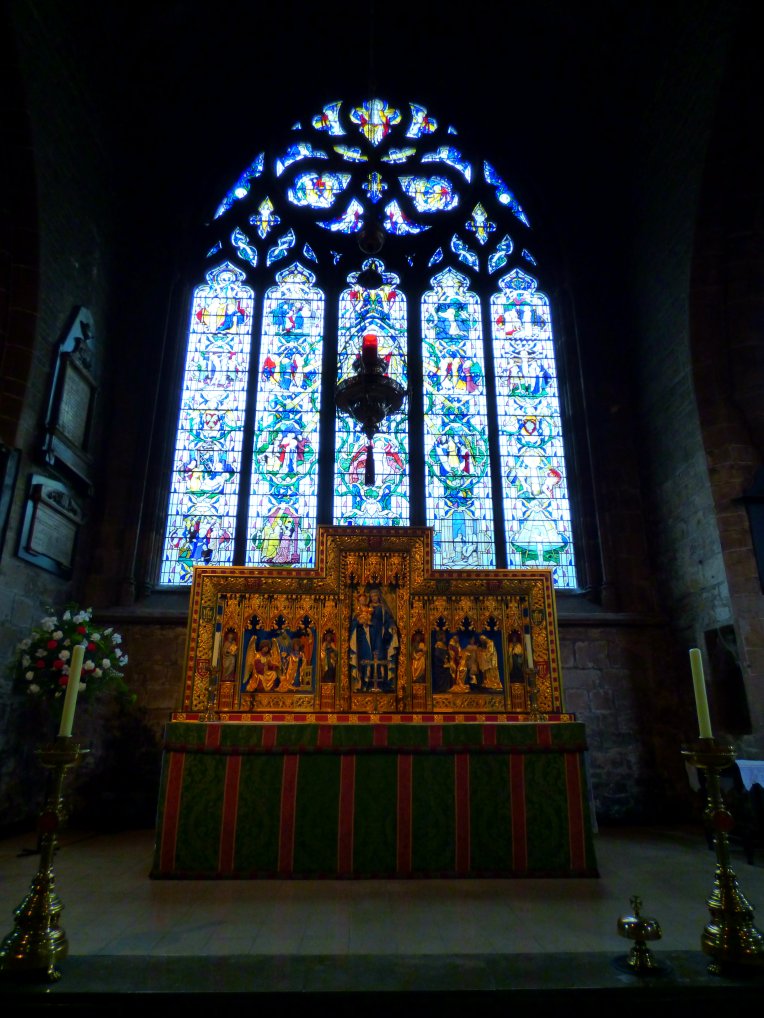 It is odd, of course, we think we are going to places for our own purposes, but so often, if you are open and ready to go where you are led, you end up finding far more than you had envisioned. We had gone to see a cathedral, but came away with a couple of years of speculative thought confirmed by the well-thumbed pages of a dog-eared book. Not a bad way to spend a rainy Saturday in Chesterfield. 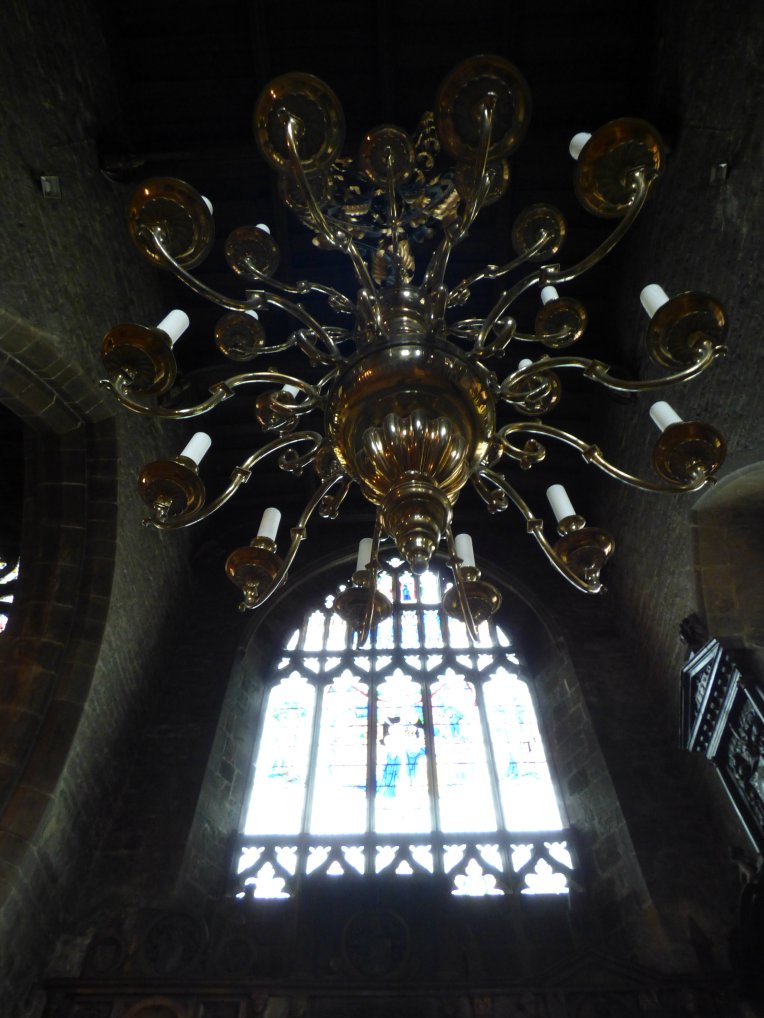 2 thoughts on “‘The Book of Assassinations’”