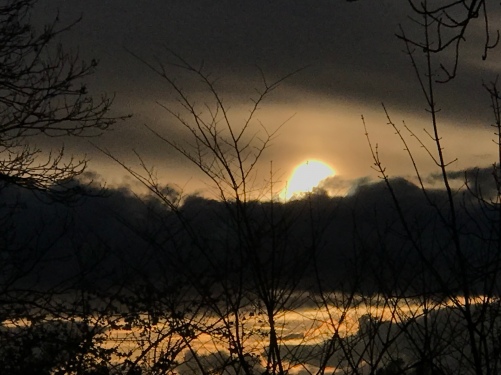 If you’ve ever been involved with anything of an ‘amateur dramatic’ nature, you will know that moment: the protagonist, hated until the final few moments (when the greater picture is revealed) shuffles off, in rags, to his doom; and the shared and questioning silence longs for the gentle and poignant soothing that only the right music can bring….

Screech, click, screech, ping, wheeeeeedle…. and then the final piece, a gentle Sufi melody cuts in… only it’s about twenty decibels too high in the flying fingers’ frantic search for sound… any sound.

The much maligned King Gilgamesh (who turns out to be only 99% schmuck) looks to the heavens in an unscripted gesture. Everyone is stunned… but for all the wrong reasons.

It didn’t happen, not yet… but it’s time to make sure it can’t…

Amateur actors – our annual workshop participants – such as the Silent Eye seems to be able to attract year on year, are wonderful people. They are enthusiastic, flexible and multi-tasking. They stand, clutching their scripts, in the middle of a space invested with spiritual emotion, power and purpose and give their all… to such an extent that, come the start of Sunday afternoon, no-one wants to leave and break up the intense camaraderie that these warm and mystical adventures generate.

There are no mistakes, just real-time variations in the script. Like Jazz, the best bits can be improvised, often with humour from above… Ask Barbara, who we once completely lost, Schrödinger-like, in the middle of Act Three in the centre of the room. To this day, no-one knows where she went.

Being the technician can be a difficult job. And, it’s near impossible to be one of the characters in the mystery play and the technician. So, the partial answer is to make the soundtrack as free-standing as possible.

The problem is the technology, or, rather, the combination of technology and the media – sound – that is required to be ‘piped’ through the technology. Most domestic music players are just not up to the job.

The epic stories of Gilgamesh the King are the oldest known legends on Earth. Using this as a basis, Stuart France has re-envisaged the story in five acts of ritual drama, where everyone attending plays their part, large or small. Stuart and Sue Vincent have crafted a workbook of nearly two hundred pages of beautifully laid out script.

I have been volunteered to play the part of Gilgamesh, but since I have taken our technology forward, too, I’m taking no chances…

Gone are the multiple CD machines, laid out at strategic points in the temple space of the mystery play; each one involving a lightning sprint from compass point to compass point. Gone, even, is the use of an uncooperative Apple iTunes with its incomplete staging of cues. Gone is any notion of carrying around the sound with a portable speaker – one of the past’s more heroic failures…

Instead of Screech, click, screech, ping, wheeeeeedle…. or just plain silence, we have this on the iPad screen:

It’s a deck… a sound-deck in software. It’s what professionals use to control the music and lighting for stage shows, moving with consummate timing from event to event as the production progresses. If you were into William Gibson’s sci-fi (Burning Chrome etc) it’s what the pre-internet generation used to ‘jack into’ the ‘net and control the world with…

Tired of playing games that couldn’t really argue back, they began to design real software; masterpieces that really could kick-ass… but in a good way.

This scaled down masterpiece of software, called iMiX Pro, runs on an Apple iPad – mine. This is not to say that it does all the work for you. Oh, no… shoot, man, there’s a bucketload of stuff y’all need to do up frooont! (Sorry, that’s my inner Texan coming out). I’ve been sitting at this ‘deck’ for two days and only now… am I winning. And that’s the thing with these systems, you have to get the music into the machine before the ‘ghost’ that is the combination of producer and good software design come together in glorious expletives that do sound decidedly Texan.

In the beginning, there is the raw music, or other sound files; so, as before, you have to get them onto (in my case) your Mac and into… Hmmmm iTunes. 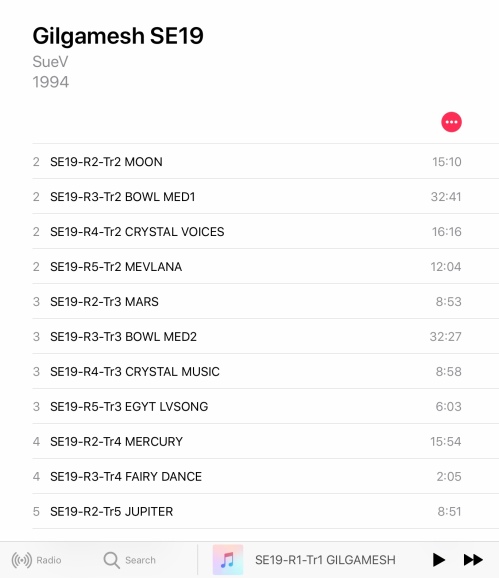 In the process, you have to re-name the tracks you want to use so that, when they re-appear in the iMiX software, they are recognisable. So, lovingly and carefully, you work out a naming scheme that shortens the track names in order to see something of their name in the individual panels on the iPad screen. The above first window is the result.

Next, you need to take the original files and convert them into one of Apple’s ‘Playlists’. These are just collections of songs. So it’s easy. You group all the original tracks and select ‘Add to Playlist’… and off she goes. You then have all your music in a second and more pliable container.

The use of a Playlist is essential because they have to be in this format to get the group of tracks across to the iPad. Along the way you get to put them in order – no mean feat with over twenty tracks. But, finally, they are ready to be beamed (okay, wired) across to their new portable home – a bit like the NASA lunar lander making a bid for freedom from the orbiter module. Once you’ve set off for the weekend, the iPad is on its own.

An hour later, you finally figure out how you did it last time and the transfer is complete… except the Apple transfer software has lost your carefully constructed sequencing and you’ve just got the order it decides you need on the iPad. They’re all in there, somewhere, you’ve just got to find each one again. So, you think about making paper list – or contact Sue, who recognises sleep-deprivation and provides one as a list of what should be happening in each act.

A small bottle of gin later, you realise that it doesn’t matter what the Apple software has done to your weekend’s sequence because the iMiX’s colossus of a DECK is about to rescue you!

Look back to the original diagram. Each of those vertical ‘pods’ is a beautifully programmed home for your hard-won music and sound tracks. And it offers you total control over how and when that track is played…. heaven. 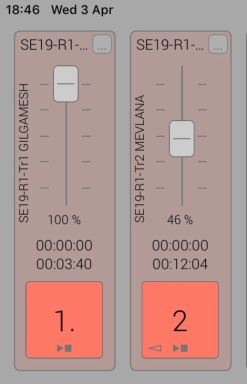 You can control the volume; you can trim the clip regardless of what any other piece of software has done to it. You can select its unique fade-in and fade-out. And written up the side of the ‘pod’ is the full name of the track you so lovingly created…

So, two days after I began, we have the Deck, fully programmed and ready to be operated, in lightning-fast real time, by our mega-techno dude who insists on being nameless.

But he’s related to one of the Directors.

There will be no ‘Screech, click, screech, ping, wheeeeeedle…. or just plain silence’. So, while I won’t actually be operating the Deck, I’ll be the ghost in the machine…

Now all I have to do is figure out how to best play that ego-maniac, Gilgamesh…There are lots of ego-maniacs in the world at the moment. Very timely, that, Stuart…

Wish us luck… please. Even better, come and join us. We can fit in a few more people if you’d like to join this merry but sincere band. And we promise that you, too, won’t want to leave, come Sunday lunch…

Stephen Tanham is a director of the Silent Eye School of Consciousness, a not-for-profit organisation that helps people find a personal path to a deeper place within their internal and external lives.

The Silent Eye provides home-based, practical courses which are low-cost and personally supervised. The course materials and corresponding supervision are provided month by month without further commitment.

Steve’s personal blog, Sun in Gemini, is at stevetanham.wordpress.com.

9 thoughts on “Dancing with the ghost in the machine”