It is raining again and about to get worse. You are in a suburban green space between neat-gardened houses, the last place you would expect to find an ancient treasure… and you are confronted with something both so alien and so hauntingly familiar, that it stops you in your tracks. A carved stone, covered in symbols, strange incisions and fantastic creatures. You have absolutely no idea what it may mean… no frame of reference… no starting point for comprehension. Yet somehow, it is not only familiar from all those pictures in books, but it feels as if you really should know how to read it.

The stone is one of the many Pictish symbol stones that dot the landscape. It is far from the best example, being both broken and weathered.  The Brandsbutt Stone was found in pieces, used as part of the construction of a farm dyke and wall. Close by are two large stones, thought to be from a stone circle that stood there until it was levelled a couple of hundred years ago, before we began to value our ancient heritage and after it had lost the respect and awe it had once inspired. It is worth noting that even today there are ancient monuments that are being destroyed through lack of care, inept officialdom and the worship of the great god Mammon.

The Brandsbutt Stone may once have been part of that ancient complex, though that is far from certain. While the now-missing stone circle would have dated back four to six thousand years, the carvings date back a mere fifteen to twelve hundred years. The Picts, the ‘painted people’, inhabited this area in the Late Iron Age through to the early medieval period and, although they themselves left no written record of their lives, they did leave many carved stones from which we can learn a good deal about them. Not all of them are as enigmatic as this one; some have scenes of battles, some tell stories, and some marry the symbols of an older time with those of the new religion of Celtic Christianity.

We had come across a few Pictish stones on our last foray into Scotland, most notably the carvings and the Cross at Brechin with its ‘indeterminate figures’, its eight-legged horse and unfortunate explanations…  There too, the marriage of old and new was still apparent, even though the stone is thought to be only a thousand years old. 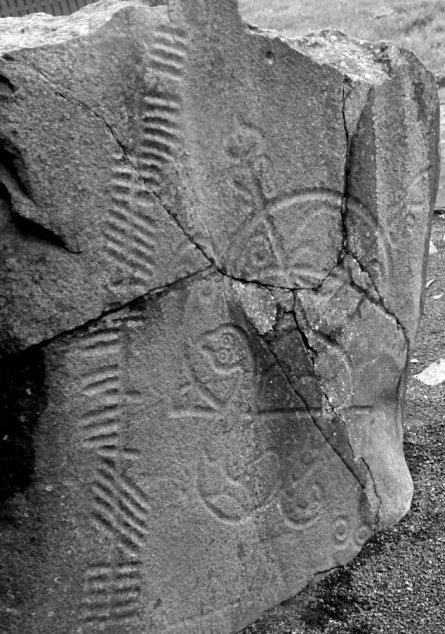 The human figures are easier to understand, even though we may argue over the interpretation of the stories they represent. The Symbol Stones, though, are another matter. To even begin to have a hope of understanding them, we must leave the familiar thought processes of a literate society behind and go back to our earliest ancestral forms of written communication.

How can you write before there is standardised written language or when regional dialects differ? Or when no-one knows how to write…or read? The only way is to draw a picture. That works for a while. A snake is a snake. Then it gets more complicated and two things happen. The pictures may become simplified, almost symbolic… like the curving snake of a ‘S’. Early forms of writing began as pictograms. But how do you draw a river, sliding silver through a valley? Or the passage of time? How do you communicate abstract concepts… like ‘wisdom’, ‘renewal’ or ‘immortality’? You might look at the curve of a river and see a snake. You might find the flow of water reminds you of the passage of time. If the tales of your people attribute wisdom, renewal or immortality to the serpent, you might just draw a snake…

If, on the other hand, you were a leader renowned for your cunning or wisdom, or if your lands were bounded by a river, you might take the serpent as your emblem and carve it on your boundary stones. Perhaps the ‘painted people’ wore their clan symbols painted or tattooed on their skin too? It is for this reason, I believe, that the incomprehensible symbols seem to hover with vague familiarity on the edge of understanding. The pictorial language of symbols speaks across both space and time in a way we can almost grasp, even if we no longer hold the keys to its unlocking.

There are some symbols, though, that are yet to be deciphered; symbols quite specific to a culture long gone. The Brandsbutt Stone bears an incised ‘crescent and V-rod’  and the ‘serpent and Z-rod’ symbol. Are the spear and the arrow, as Helen suggested, male and female weapons? The crescent of the moon and the obvious symbolism of the serpent, as well the relative appropriateness of the weapons’ ease of use, might bear that out. Do they refer to the male and female lines of a heritage or clan? Are the angles reminiscent of those used in the construction of the stone circles, millennia before? And why are the weapons apparently broken? It is an ancient practice to ritually break that which is offered to the gods, as we had explored at the Druid Lake on the isle of Anglesey. The breaks in these carved, symbolic weapons, if breaks they are, appear to be both deliberate and supported in some way. What significance might that be hinting at? 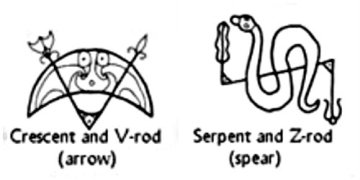 Thankfully, we do have a transliteration of the final symbol on the stone. The vertical line crossed with many horizontal lines is not an untidy decoration, but an inscription in Ogham, which we had last seen at Nevern. This early medieval alphabet is almost always used to inscribe just a personal name. The groups of dashes are placed in specific positions and at distinct angles, across a straight line…usually the vertical corner of a stone. Here, as the corner of the stone would have been too uneven to be suitable, the vertical line was simply inscribed.  It can be read as IRATADDOARENS, which has been linked with Eddarrnonn, which may refer to St. Ethernanus, a Columban saint, and founder or a number of churches on the east coast Scotland.

Intrigued and thoroughly drenched one more, we regained the shelter of our vehicles and set off behind Running Elk for our next location. Following his lead, I wondered about the odd hand signals coming from his car, often in direct contradiction to his indicator lights. The ‘up’ was confusing. It took a moment to work out that he was pointing to various other sites of interest along the way… ones we would not have time to visit, like Balquhain recumbent circle, also known as the Chapel of Garioch, on the slopes below Mither Tap; a circle which has lunar alignments.

The circle is no longer complete and is missing several stones, but what remain are large and impressive, even from the road. The ten tonne recumbent stone is twelve feet wide and over five and a half feet tall, I read later. It is a white granite that seems to have been carried to the site from some distance. Once again, the stones are polychrome. The eastern flanker, six and a half feet wide, is of grey basalt, while the western flanker, over seven feet wide, is of red quartzite with white quartz inclusions.  The outlier is the one I would most like to have met, though… a ten foot tall pillar of pink-seamed white quartz, which, even from a distance, appears to have an interesting face…  Me, I’d have happily foregone lunch to get a closer look… but I would not have wanted to miss our next stop…

11 thoughts on “Solstice of the Moon: Unfamiliar territory”