January…and the clock is ticking down to spring. Work that has been going on all year  now changes gear. It began in earnest last year, with a research trip to the British Museum to see the art and artefacts of an ancient civilisation that was at least the equal of Egypt, but which is less well known today… Sumer.

Over seven thousand years ago, long before the pyramids were dreamed of, the people who would become the Sumerians settled in Mesopotamia. Their culture was rich and colourful. We know that music and the arts were of great importance to them…and their city of Uruk, home to up to eighty thousand people at its height, was the centre of their world. 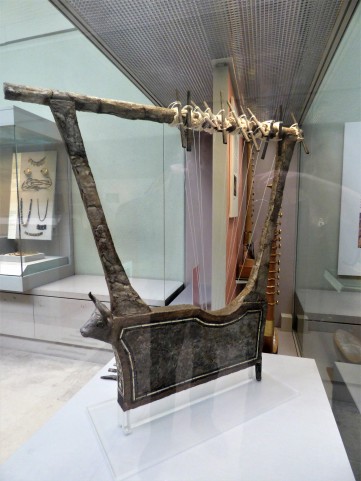 Gilgamesh ruled in Uruk almost five thousand years ago and his story passed into legend and thence into myth. It comes down to us, echoing through the ages, as the Epic of Gilgamesh, which is regarded as the earliest great work of literature known to Man. The earliest version we now have was found in Nineveh. It was already ancient when a scribe named Sîn-lēqi-unninni collected the tales and wrote them down, over a thousand years before the birth of Jesus.

The story, though, is not ‘old’ in anything other than age. It tells of the adventures of the king, a story in which he is both villain and hero by turns. It is a very human story, though the gods of old walk through its pages, and although it can be read as ‘no more’ than a myth and an ancient curiosity, it can also be read as a representation of a human journey through life to the dawning of a greater awareness.

It is a magical story, wholly relevant to any seeker who has set their feet on a path towards self-development and a wider consciousness. It is also a story that resonates with our own time, where we encroach upon the natural world with little respect for its life and purpose.

The art and craftwork that we saw at the museum was beautiful and delicate. Tiny cylinder seals, intaglio carved and small enough to be worn in a ring, roll out scenes of gods, animals and starscapes.Jewellry of pure gold rests, fragile, on tiny springs so that leaves and flowers tremble with every movement. Ancient texts in cunieform, possibly the earliest form of writing and one of the greatest achievements of Sumer, tell forgotten tales…  It was a good place to begin and we left the museum aware that the text we would use for our April workshop sprang from a great civilisation with a deep understanding of the workings of the human mind and heart.

But, no matter how early you begin, the last few months are always against the clock as so much must be put into place when we begin to have an idea of numbers. This year, we know that once again, people will be converging from as far afield as Europe and the US to meet in a village in the Derbyshire Dales. Thousands of miles will be travelled between us as our various wheels turn and we head, from many different directions, to that central point of meeting.

It is easy to compare those diverse journeys to the greater one we have all taken as we come together at this point. Only a few who will be attending are Companions of the School, and we have each taken very different spiritual paths towards this moment in time. There are those who have followed a Shamanic path; there are Qabalists and one who refers to herself laughingly as a witch… yet who lives the life of a priestess of the old ways with all her being. There are ritualists and those who simply follow where their heart leads; Rosicrucians and mystics, Druids, housewives, magicians and scholars. We have all walked our individual paths alone, some have also studied with other groups and schools, some tend the hearthfire and many still forge their own way towards the goal we all share.

So what brings such a diverse crowd together, to share the adventure of a weekend workshop? That there will be fun goes without saying; these events are always a time of laughter. There is friendship of course… some old, some still to begin. Some are ‘old hands’, for others this will be a first time and a first meeting face to face with those only known through the ether.

Yet beyond the smiles and greetings there is something else at work. Each of us, from our own unique place in the great tapestry of life, is seeking a common understanding of something we feel to be greater than our normal human consciousness can fully grasp. We each have our own vision, our own guiding light… we may call it by many names, or know it only as a vague yet insistent pull at the heartstrings. Yet the further you walk along your chosen path, the less the details matter, you see only the light that floods both the paths and the space between them… and that light is the same.

This year the workshop takes us back five thousand years to the great civilisation of Sumeria. In exploring a world long dead, walking with the shadows of an ancient land, we are not harping back to the ‘olden days’ or hankering after times gone by… we are taking our own minds and placing them in an unfamiliar frame, where our perspective can shift. From fabric and gilding an illusion is born and, as within a dream, the illusion holds its own reality while it lasts. A ‘willing suspension of disbelief’ allows us to walk within that illusion and, as with a dream, what remains when we wake may cast the glow of understanding on our path.

We are holding up the jewel of being and letting it refract a thousand rainbows from many facets… and in those moments we may catch a glimpse of their colours. Such a moment does not bring the kind of knowledge that can be learned from books, nor the understanding of conscious thought, though these too have their place alongside what is learned through experience. What is reaped from such gatherings is no more than a seed… yet a seed may contain a tree, and a tree a forest. At the end of the weekend, each will take from this time out of time something unique to them alone which we hope will serve to shed a mirrored rainbow on their own journey.

As the wheel of the year turns towards Beltane, the time of renewal and Union, our gathering too will seek in the dark flame of a shadowy past a light for the future and perhaps move a small step closer to that greater Union between our human selves and that spark of Divine Fire that glows within every heart.

‘Gilgamesh is among the greatest things that can ever happen to a person.’
– Rainer Maria Rilke.

The Silent Eye’s Spring workshop for 2019

32 thoughts on “Getting there…”