They were both young, though he was a year older; beyond childhood but not yet adults, not in the way that their lives would soon force them to be…

They had been together since their early years, and what they were experiencing now, would, on an emotional level at least, bind them together for life. How much more frightened could you be than to be locked up in the place from which your mother was led to her execution? In the darkness, she tells him that she will never marry–should they survive. It is a sentiment and an intent shared with one she feels deeply for; and it will carve a signature of longing throughout his illustrious life.

They will never marry, though he will try to change her mind. They may have been lovers, but the risks to her kingdom of England and Ireland would have been grave. Better, I think, to consider them as lovers of the heart, as two intense and intelligent people who had to come to terms with an England and Ireland changing faster than anyone could have imagined…

Robert Dudley, the future Earl of Leicester, and Elizabeth Tudor, the future Queen of England, were prisoners in the Tower of London. It’s 1554, and England was about to change, forever.

It is as though they were meant to be close. They had been tutored, together, by one of England’s best minds – Roger Ascham – at the original Hatfield house – one of Henry VIII’s many homes. In Tudor times, women were not allowed to enter university. Robert Dudley, son of the Duke of Northumberland, may have been there to lend companionship to the second royal daughter, who was unlikely to ascend to the throne, given that her brother, Edward VI, King Henry’s son and heir, was shortly to be crowned.

Edward died in 1553, age sixteen, after just six years as regent. He never reached his majority. Because of his age, a Regency Council had been established to guide his steps. Despite his short reign, Edward was able to further the cause of Protestantism in England, becoming even more determined than his father, and without the latter’s ulterior motives.

The second head of that Regency Council was Robert Dudley’s father, John Dudley, who was then Duke of Northumberland, tasked with controlling unrest north of the border. John Dudley was a formidable military man and defended England well during the reign of both Henry and Edward. He had also recognised the future importance of the navy, leading to the establishment of the Naval Dockyard at Chatham. John Dudley used his unequalled power to entrap the Duke of Norfolk – a strong Catholic supporter. In 1551, The Duke of Norfolk (Edward Seymour) was executed for conspiracy.

John Dudley, Robert’s father, was now unchallenged in his power and had the ear of the monarch. But the young King Edward’s health was faltering. John Dudley had to act to prevent the return of Catholic political power – in the form of Princess Mary.

He did this, in 1553, by persuading the young king to sign a document excluding both Mary (Catherine of Aragon’s daughter by Henry) and Elizabeth (Anne Boleyn’s daughter) from inheriting the throne, on the basis of their ‘illegitimacy’. The throne was to go to Lady Jane Grey, conveniently newly married to Guildford Dudley, fourth son of John Dudley.

The political complexity of the times meant that Robert Dudley and Elizabeth’s fates were intertwined in so many ways. But, whereas Elizabeth would leave the Tower to be exiled to the comfort of one of the royal homes in Hertfordshire, Robert Dudley was to leave to a much more uncertain fate.

John Dudley’s attempt to control England floundered. He never had the ‘common touch’ and Princess Mary fled to East Anglia – where John Dudley was very unpopular. His son, Robert, was pressed by his father to take King’s Lynn and proclaim Lady Jane Grey as Queen; but by then, despite John Dudley suppressing the news of King Edward’s death for three days, the public had rallied around Henry’s eldest daughter and John Dudley was arrested and executed for treason, leaving Elizabeth and Robert Dudley at the mercy of the new queen.

Both survived the Tower. Robert Dudley fought for Mary’s forces (and for Catholic Spain) against the French and was restored to courtly favour, though the Northumberland estate was decimated. By then, new forces, orchestrated by the likes of William Cecil were taking every opportunity to re-establish Protestant England. After Mary reinstated Rome’s ecclesiastical authority over England in 1554, her popularity plummeted. The following four years earned her the nickname of ‘Bloody Mary’, as scores of Protestant leaders were persecuted; but, in fairness, that was no different from the life of Catholics under Edward. In July 1554, Mary married Charles II of Spain, and England looked set for a Catholic future.

England’s prosperity was ailing. Her ships could no longer plunder the Spanish treasure ships, and Charles II was constantly away on his military campaigns abroad – on behalf of Spain, not England and Ireland. Aware of her failing health, and the failure of her marriage to the power of Spain, Mary reinstated Elizabeth as one of her last acts.

Queen Mary I died in November, 1558, in the Palace of Saint James. She was forty-two years old.

Elizabeth inherited the crown and was then free to take up her relationship with Robert Dudley, who had been her companion in those darkest of days.

In our story, when the company arrives at NonSuch palace, they are shown into a newly-prepared room, one in which a deadly search for the truths of the age will be played out on many levels: intellectual, emotional, religious and magical. Outside of the Queen’s own mind, no-one else in the room is aware of what is to follow. 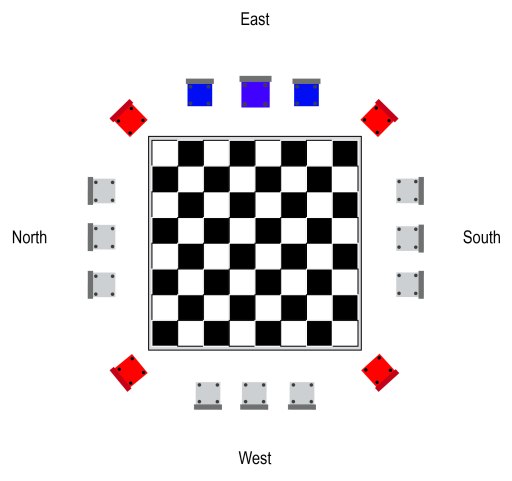 Each  side of the board has its own symbolism and its own champion. In our five-act magical drama, Dudley is selected by the Queen to be one of her key players. He finds that he knows many of the others present – and has been an artistic sponsor of others, such as the poet Edmund Spenser, the writer of the Faerie Queen – based on Elizabeth, herself, and newly published. What does his Queen want him to do in this complex maze of relationships and potential confrontations? The answer may tax him more than anything she has ever asked…

The Silent Eye’s spring workshop, April 2018 is: ‘The Jewel in the Claw’. The jewel is the emerging spirit of tolerance that Elizabeth, the self-styled virgin-queen, engendered; the claw is the nature of the forces of ignorance that still plague us in the twenty-first century every bit as much as they did in 1588–the year that the mighty Spanish Armada was defeated by a combination of English naval courage and our equally fabled weather; and Elizabeth I finally achieved a degree of security.

(End Part One. The story of Elizabeth and Robert Dudley will be continued in part two)

Image: Composite of original artwork by the author plus a portrait of Robert Dudley, Earl of Leicester, courtesy of  Wikipedia, CC by 3.0, Public Domain.