The heat was both welcome and unexpected. Britain in summer offers no guarantees, but on this, the Silent Eye’s third foray into Wales, we had once again been blessed with sunshine. Inevitably, at the earliest opportunity and armed with ice cream, we headed for the shade.

We had separated to go exploring and, as might be expected, Stuart and I had left the man-made landscape for the trees. We had spotted a small gazebo that promised superb views over the village and climbed the path into its relative comfort, feeling the contrast between light and shadow playing on our skin as we walked.

The landscape is not exactly natural. The old cove of Aber Iâ that is now known as Portmeirion, was once dominated by a Norman castle. Gerald of Wales mentions the newly built Castle of Deudraeth in 1188, and, although there is some debate about whether or not it was this castle, what is known is that the rocky outcrop does bear the remains fortifications and stonework dating back a thousand years. It was never a place of might, designed to withstand armies, but rather a symbolic demonstration in stone of lordly power. The castle was demolished in the 19th century and some of its stone was used in the building of Portmeirion. The main stretches of ancient wall that remain today are hidden within the rhododendrons, with only Clough Williams-Ellis’ fake battlements easily found. I rather like the idea that the old symbol of authority was used to create beauty and only a replica left behind. 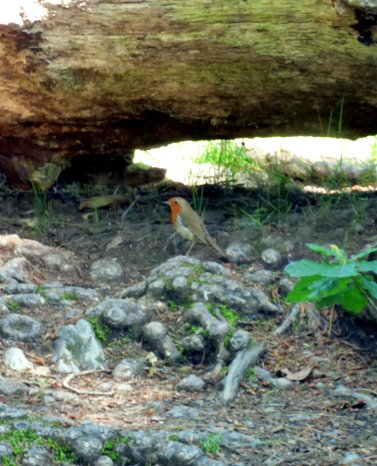 A robin wandered over to see who we were and what possibilities we might offer, its wild heart free to choose its actions, within the limits of its nature. We relaxed, watching the world, until the silence was broken by the arrival of the land-train. For a few minutes, we saw the arm of authority exercise its power.  As the train stopped, its occupants descended and, on instruction, made for our gazebo. They dutifully admired the view, each ceding place to another, and taking a quick photograph. The whistle blew and they all returned to the land-train, to be taken to the next place they would be told to admire. It was a small thing, a matter of minutes, but served to highlight the unconscious alacrity with which we human beings accept that our actions may be dictated.

Rejoining our companions, we headed once more for the relative cool of the woods, stopping to investigate the miniature lighthouse that rises from the trees. It is a tiny thing, made of metal and seems to serve no other purpose than to be there, adding its contrast to the green. You have to wonder if it works… or was ever meant to do so. It poses some odd questions. A lighthouse should be a beacon, yet, if it does not  shine, if it is no more than an empty shell, is it still a vessel of light?

One of the wishing trees of Portmeirion was just around the next rise. There are a number of them; felled trees into which passers-by hammer coins with a stone. No-one seems to know why or when they began to appear. It reminded me of the old tree stump we had found outside a church, into which nails had been hammered, a relic harking back to an earlier time and belief. Once it was believed that witches could be kept at bay by hammering nails into trees. The coins, though, may be more of a votive offering. In folklore such gifts to the spirits of the trees and springs bring health or luck… and the removal of such coins reverses the gift.  The number of coins is astonishing, even in the one small stump. Almost automatically, the urge to do likewise arises, even when the conscious mind has no such desire. It is as if remnants of a herd mind still linger, just below the surface, waiting for evolution to take its hands off the wheel.

A second robin joined us as we contemplated a contorted tree, hopping close to my outstretched hands…probably to see if they held lunch. He watched from a safe distance as we broke out of conformity for a while. The tree was too good not to climb, but too high to reach the lowest bough without a little ingenuity and teamwork. That is the other side of the ‘herd mind’; perched in the tree, we had achieved the improbable by working together. 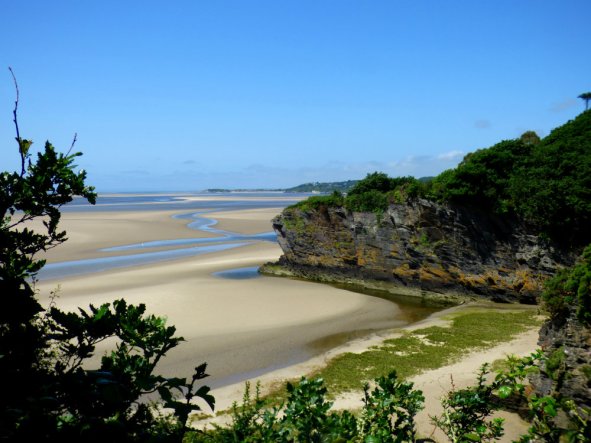 We began to climb, leaving the sun for the shadows beneath the trees. The oriental gardens would be a perfect place to stop and share our readings. Oriental they may be, but our first sight of the water would have inspired Monet.

It is a place of perfect contrasts. Deep shadows and bright sunlight, green wilderness and careful planting. What has been planted is allowed to grow wild… what grows wild is managed. Neither seems rigidly curtailed, yet neither are allowed to overwhelm the other. Dragonflies and damsel flies skitter across the water. Butterflies like scattered petals fill the air. Nowhere is Williams-Ellis’ vision of the melding of man and nature more perfectly expressed than in this small corner of the landscape. 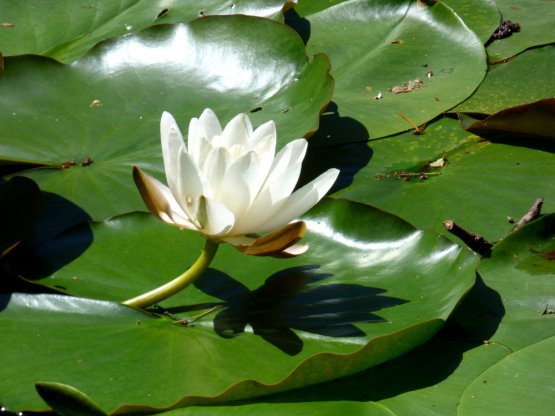 It was here that we chose to sit and take our first reading of the day, a perfect complement to that of the previous night; an illustration of polarity in form and essence and the relationship between the sacred and the apparently profane.

Others also shared their readings, each adding to the moment their own particular light and shade. “…the sense of the sacred as something pervading the whole order of nature. Every hill, tree and river is holy…” In the green places, it is easy to remember, to look out and see the sacred in the world. The need is to see it in the small things of everyday life and within ourselves. 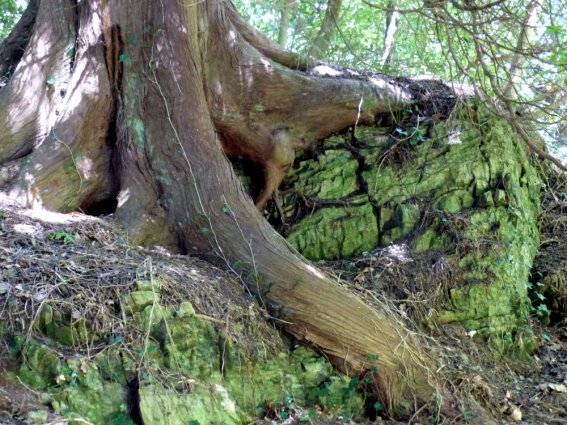 As we read, the third robin of the morning, even bolder than the others, came to take part in the proceedings, showing no fear at all, just curiosity and trust. Folklore has many tales to tell of the robin and it is seen as a symbol of divine service as well as a messenger of new growth and beginnings. The robin also brings another gift… he does not fight, but resolves his disputes with song. Our earth is full of teachers and the spiritual journey may be signposted by the smallest of them. The little bird came in trust and was welcomed with love…

… and laughter. Our redbreasted friend was hot. The sun was at its zenith, the day unbelievably hot…and our robin simply flopped in the dust, ruffled his feathers, opened his beak and did nothing for a while. It seemed like an excellent idea.

We made our way back to the entrance, leaving behind a place to which we will inevitably return and headed across the estuary to Harlech.

8 thoughts on “The Wyrm and the Wyrd: Contrasts and small things”