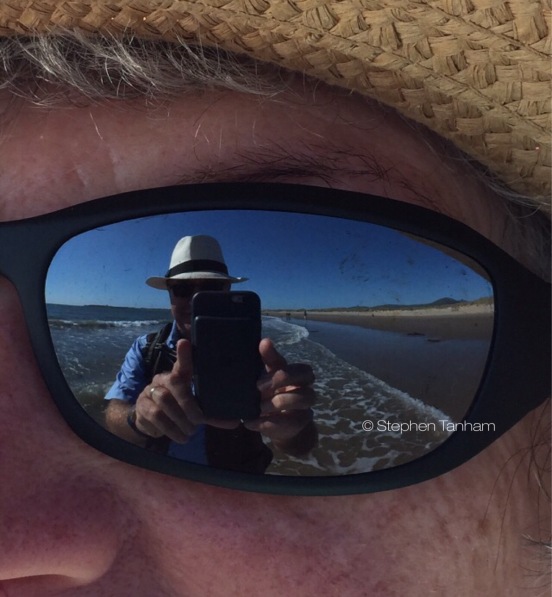 As the land-train pulls out of the main square in Portmeirion, we head up into the forest. There are three distinct internal regions within the Portmeirion site. The first is the village, itself; the second is the coastal walk; and the third is the forest walk. The little train follows the forest road, but stops to give a view of the coast in several places. Sometimes, it’s difficult to separate the often wicked humour of the creator of Portmeirion – Clough Williams-Ellis, from the mental overlay that hunters of the ‘Prisoner experience’ project onto this unique place.

Station names like: Salutation, Old Castle, Playground, and Shelter Valley all take on a secondary, if not intended meaning within the context of following the McGoohan mind as you attempt to tease out the secrets of this landscape embedded in the Prisoner series. 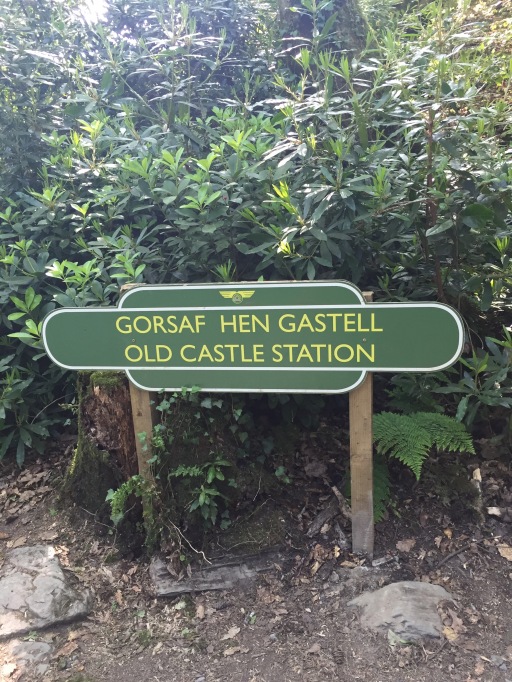 We had invited our companions to spend their own time in the forest before meeting up for a group walk along the coastal path. The forest is a very special place and, to my recollection, featured in the Prisoner series only when No 6 was running away or having secret meetings with other ‘prisoners’ – many of whom were planted, and simply pretending to suffer to get No 6’s sympathy so that he would tell them why he resigned. The thought brings back the central question of the series: why was it so important that the various No 2 characters found out the motives of No 6? They were presumed to be all-powerful, so why did it matter what reasons had engendered the resignation in the first place?

“His power – the very reason for him being here and retaining a glimmer of that power – was that he had a secret,” hisses the intense green all around us… The sun is getting hotter and the deep, summer blue fills the gaps in the canopy of the forest. The shifting has begun, again…. 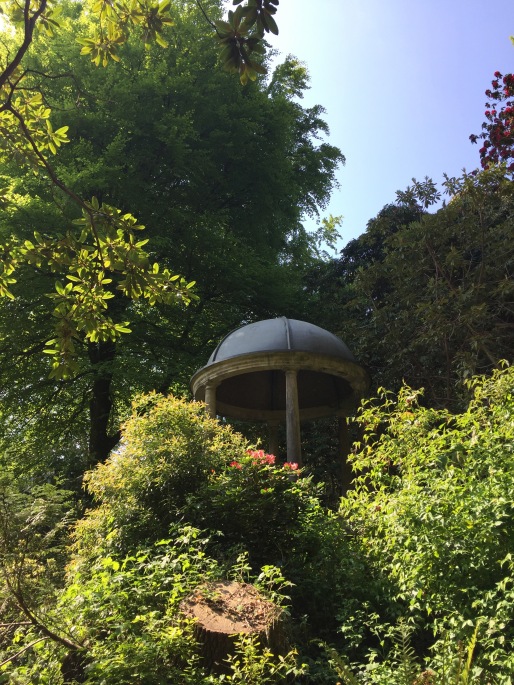 And then, high up in the trees, a pagoda comes into view and we’re suddenly back in that different sense of presence where the voice of McGoohan is guiding us from ‘above’. There is no pretence that the being of the actor is actually here, simply that we have woven an internal, creative state – a kind of walking meditation that enables insights, using the ‘voiced presence’ of the creator of No 6 to help bring it to life. It’s a directed mediation, just like we use in the Silent Eye, and, in this rich and wonderful hillside, it’s working beautifully…

There is a real question here, beyond the mental and emotional game we are playing: what did it mean? What was the inner meaning that McGoohan went to such pains to conceal, giving only hints, even long after he had left the Prisoner behind. “It’s important, then,” says his voice in my head. “to work it out for yourself.”

We move deeper into the forest. The green intensifies…

“Who were they, then?” asks the dark voice of No 6, “The others – the supposed fellow victims of abduction to this demented heaven and hell?”

It’s a sobering question. If McGoohan was the ‘awakened’ self, projected, post-resignation, into a new reality in which his ordinary life became exposed as a prison and left him resolutely determined to escape to the ‘real’, then who were the characters who met him in the forest, pretending also to have been abducted? Agents of someone, singular or plural, but who? The mysterious No 1, presumably… 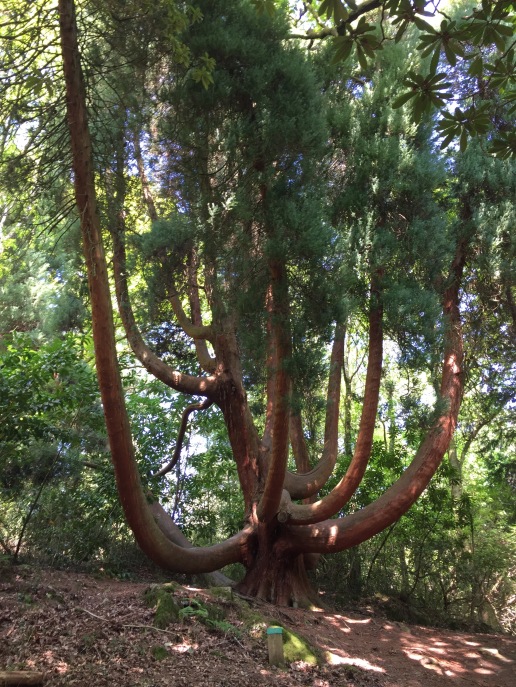 We are climbing now, and, up ahead a Japanese Cedar curls out its exotic curves, projecting an image of something that goes somewhere via a very roundabout route. Its shape suggests that straight lines don’t necessarily get you there as you expected, and sometimes curved paths are more fruitful.

How do you follow a curve? I ask myself. Then the old answer comes back, one borne of recent experience: with trust… in other words by staying on it. When the envisaged future is invisible you can either refuse to get off the bus in the forest or get off at Unknown Crossing and trust that you are where you should be… 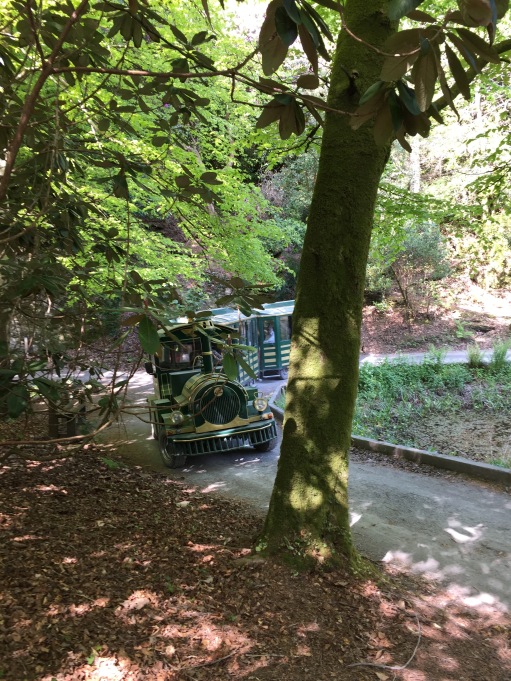 The forest begins to speak for itself; there is the sense that we have discovered enough, that if we take what we have and see it from the green wholeness that this place provides, the important patterns will emerge.

We say little, simply walking and letting our thoughts wander. 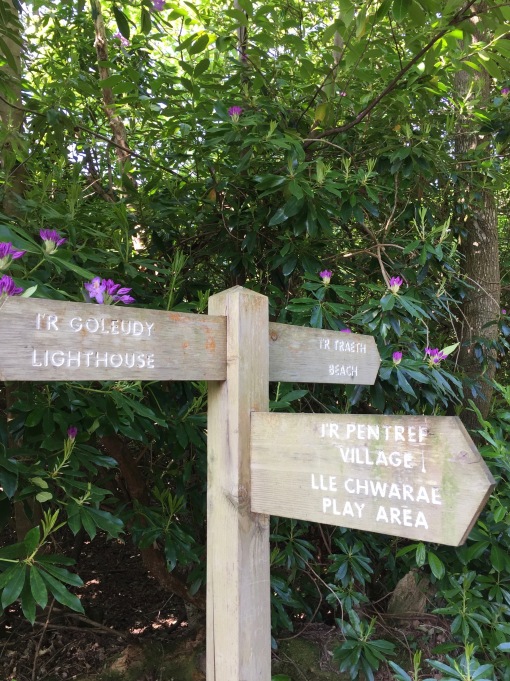 There’s a signpost up ahead. Ironically, it speaks of a lighthouse. What more potent a symbol could there be? And then, as the path moves downhill and turns sharply left, the forest gives way to the coast. The splendour of the sea is revealed, pointing us back to the place where our adventure began, the previous evening – in the tiny cove of Borth-y-Gest. It’s a wonderful omen… 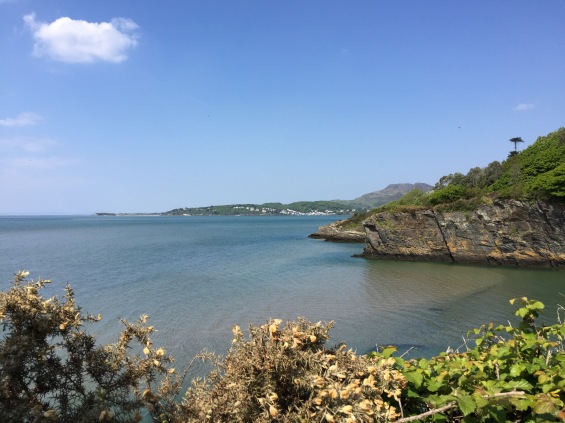 “What, the whole thing?” she laughs.

“What’s to lose?” I ask, sounding more sure than I am.

“Ok,” she says, challengingly; waiting and watching as I draw breath and look out to sea.

“No 6’s life as a spy is just that – he spies on life from a distance and under the cover of special powers.”

I look across at her. Initially, she says nothing, then, “It’s a good start…”

Another breath, deeper this time, because I’m assembling this, charged with the forest’s green energy, as I go.

“He realises the shallowness of his life and resigns – the brochure of a holiday paradise in his case – intending to be free of the whole thing and completely underestimating the power of the establishment to curtail his little adventure.”

“The establishment… I like that,” Barbara says, laughing, and continues. “Who promptly drag him, drugged, back to where he came from and psychologically torture him.”

“Exactly,” I say, warming to this unfolding. “He forgot the power of the establishment – the ego – to take away his new, enthusiastic consciousness and drug him back to an imprisoned state where ‘it’ could find out what he was up to…”

“So, in a sense, he stays drugged, and wakes up powerless but determined to get back to that moment of truth from which he could see his new life, his paradise?”

I look at her, so glad this has been a shared thing. “Yes… Exactly that.”

“No One, Oneself… Take your pick. The other ‘controllers’ are the regents of the ego, trying different ways to undo him – as they have done all his life. They don’t answer his question of Who is No 1?, because they can’t.” I pause, slightly giddy with the ride, and grinning like the proverbial cat.

She is smiling, too. “But when he truly wakes, again, by defeating the No 2s, he will remember that he is really No 1?”

“Exactly… and paradise will be reclaimed.” 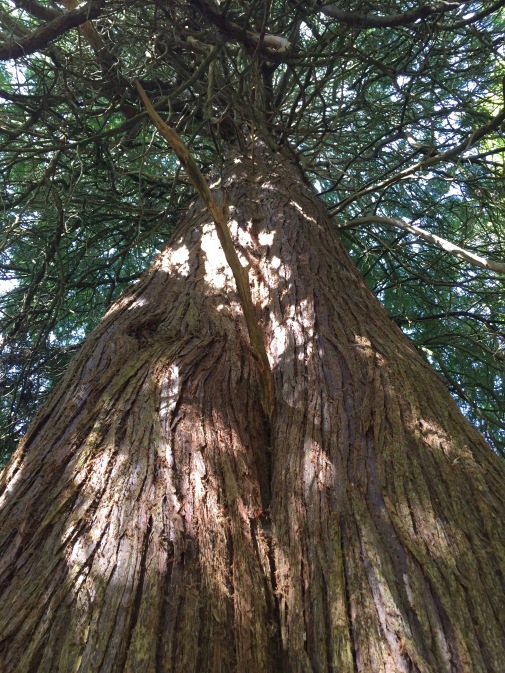