Part Three of The Unseen Sea: adrift in the enneagram

The busy square is suddenly hushed. He watches as the four-year old girl with the golden hair runs ahead of her mother towards him.

“Grandad! I beat mummy!” she says, gleefully, climbing on his knee.

The constant pain from the arthritis makes him wince – she is getting heavier, but he makes sure that his eyes, though wet, do not show this. Instead, the emotion they display is one of wonder at the demonstration of symbiosis of his inner thoughts with the unfolding of the world in front of him.

Jessica’s mother, the old man’s daughter, is suddenly there, before him, sharing the intensity of her father’s love… and his wonder at what the world has just brought in on the tide.

“She beat mommy, yes,” she says, wistfully, staring into the face of the invisible devil seen only by grandad and daughter, in the face of the golden rays of the little one… Then looking into her father’s adoring but pained eyes, she holds out her hands and says, “Come Jessica, give Grandad Lucca some peace.”

Four billion circuits of the Earth around the Sun prior to this, LUCA intensifies her self-wrapping, sealing closed her new world in the strongest proteins she has ever synthesised. Now, she is alone… For a moment, the molecular interactions with which she communicates are silent, while part of her becomes the movement of something dropping away…

The Imperative is silent… just for a second. Then the chemical pressure from inside the shell reaches dangerous levels and she realises that she can never exist alone, can never be without interaction with the outside world of the hot sea-bed and the bubbling gases from which she arose.

She forms a chemical breach in the newly wrapped wall of her shell and expunges the toxic waste that had threatened to eat into the integrity of her protein spirals. For a second longer, there is peace, again, but then the hunger begins in the pathways that feed and she punches another perfect and tiny hole in her shell and adapts it to be a mouth. Her existence is precariously balanced as she plays with the cycle of in and out; finally settling into a rhythm of chemical exchange – the new, in; the old, out. At the edge of chaos, there is, briefly, balance.

It will always be there, this fear. It will accompany the journey from self-replicating DNA molecules to golden-haired children playing in sunny squares amidst the verdant hills of the far future.

The Imperative does not need to understand the implications of time. Its very nature is the need for persistence… to Be.

Inside the shell of the cell, the need to Be changes from replication to protection against the out-there. What was continuous has now become potentially terminating. Life and Death have come knocking on LUCA’s shell. The price of separation is almost as great as the gain of independence.

One day a great man will write, “Fear is the mind-killer…” But that is far in the future, as is the mind, itself. But both are born of this separation, and the adjustment of the separated to that in which it now lives.

In the enneagram that is the all-mother named LUCA, three lines have appeared, connecting three points that look fundamental to the whole thing. 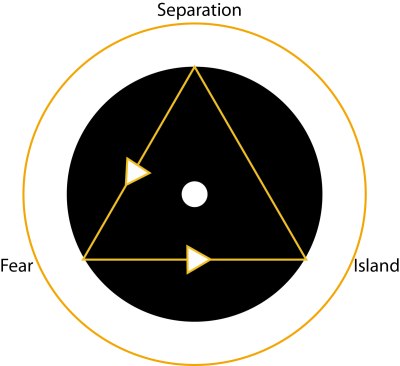 LUCA has turned away from the world in which she arose to form an island. Something impelled her to do so. The memory and constant presence of the Imperative controls all else, for now. What young Jessica has already learned as fear, was born, four billions circuits of the Sun ago, as the Imperative:

Persist, at all costs, inside this shell;

Add to the known;

One day, something will arise with enough power to counter this, but that is far in LUCA’s future.

Read the previous parts of this series: