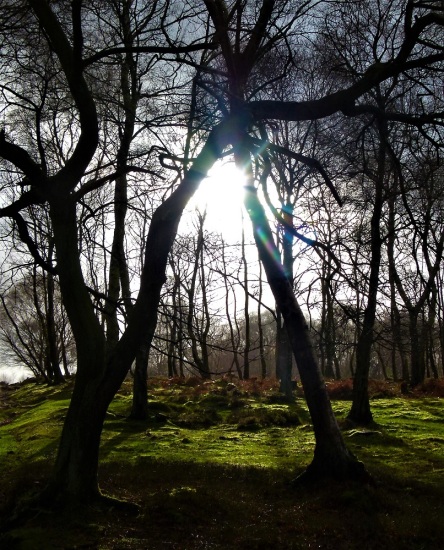 Peering at the faded remains of a dark ‘instant’ photo from the seventies, I felt both close to and distant from the young woman silhouetted against the fence. Her future is my memory. She was still a schoolgirl, yet to launch herself on the world and soon to marry. Far too soon… that would be my take from the perspective of nearly five decades later. How did that happen?

In some ways, it seems an eternity. In some ways it is… a whole lifetime, my lifetime between ‘then’ and ‘now’… and as such, it is the only eternity I really know. It is an odd feeling, that. We know history happened before we were born. Some of it is very real to us, because we know the people who made it; our parents and grandparents tell us of those days, when they too were young. We know that history went on before ‘history’, before prehistory, right back to the first swirlings in the mind-stuff that would become space and time. We know that history will continue to happen long after we are gone, both as individuals and as a species… though for now we call it ‘the future’ and are sad, or glad, that we will not be around to see it. But we only know the scintilla of eternity that exists between our earliest memory and this moment. Anything beyond that is hearsay.

In that respect, at least, we can say with truth that we are eternal. We carry eternity within us, carved into the space between conception and our final breath. Reality exists only in the moments it touches us, with past and future no more than a matter of faith and conjecture. Unseen, unreal, the future has yet to become, while the past is no more. The only moment we have is now… and whole industries have grown up around teaching us that one, rather obvious fact that we overlook when our focus is upon regret, nostalgia, worry and hope.

‘Living in the moment’ does not mean failing to look ahead or to hope, nor does it mean we must release all memories. It is a matter of awareness and focus, of not missing what is by clinging to what was or imagining what might be. We forget that ‘now’ can only exist at all if there is a ‘then’… and the space between that holds them apart so that both can be.

The ‘no-thing’ can exist on its own…  but the ‘some-thing’ needs the ‘no-thing’ in order to exist at all; a degree of separation that enables being.

One of the analogies we use in the Silent Eye is that of the mother and child.  The child in the womb can be said not only to be one with the mother, but to be made from her… though she is not all that the child is, or will become. The child has no life of its own, no possibility of independent action, until it is separated from the mother at birth. In that separation, there is possibility, growth and a dawning awareness. Yet, at the end of physical life, both mother and child will return to the earth that can be regarded as our Mother and with whom we share the physical elements of existence. Those elements will, in turn, give rise to new life in an endless and beautiful cycle that renders us eternal in yet another manner. Perhaps that is one reason why the image of the Mother and Child has been seen as sacred in so many cultures.

Nature is a mirror for wider realities. The matrix for our beliefs, knowledge and life itself is held within the pattern of the natural world, while the fragment of nature that governs our tiny planet is but a child of a greater and universal nature. If that pattern holds true to itself, then the Cosmos is itself but a fragment of a greater Whole, separated to enable it to be, to grow and to realise itself. If that is true, then we are indeed eternal, both ancient beyond imagining and younger than new-born babes.

I look back at the old Polaroid, an instant photograph that captured an instant of a life I think of as mine, but which runs through every living being, past, present and future… if linear time itself even exists. It is no longer just a photograph of a young girl on the brink of womanhood, but a pause in the heartbeat of being, allowing me to look back on ‘then’ from ‘now’ and know that it is the space between that enables me to see beyond the moment, to the horizon of eternity.

7 thoughts on “The heartbeat of eternity”