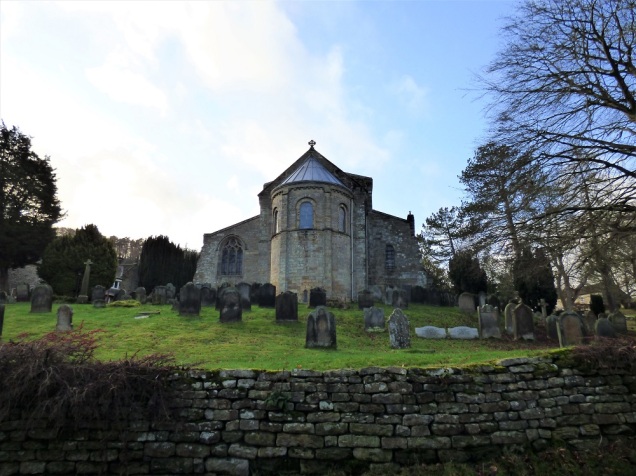 The weekend was almost over, but before we reached a parting of the ways, there was lunch in the seventeenth century Blacksmith’s Arms opposite the church and a wander around the village of Lastingham to visit the holy wells.

The first well, St Ovin’s Well, we did not see. It is tucked away on the road that leads towards Pickering and all that remains is the eighteenth century well housing… neither spout not basin have survived. The well’s origins, however, are much older… as are those of the other wells in the village. St Ovin was a Fenland Bailiff of Queen Eltherdreda who turned his back on the life of the nobility to serve his God with his hands. Perhaps that is a true nobility after all.

The next well is dedicated to St Chad, brother of St Cedd and Bishop of Lichfield. The well housing sits beside the road and, Steve told us, used to flow until very recently when the owners of the property found out they were being charged for the water. There is a legend that says the remorseful Mercian king, Wulfhere, converted to Christianity, acceding to the wishes of his wife, Queen Ermenilda, after punishing his sons for worshipping at the well… though there is no guarantee it was this St Chad’s Well and the story may be linked to the well of the same name at Lichfield.

The grandest of the wells sits beside Hole Beck and is dedicated to St Cedd himself. It is believed that some of the stones may have come from nearby Rosedale Abbey. Like the other wells, the origins of this holy well is far older than its current appearance would suggest.

The most interesting of the Holy Wells, however, lies just outside the village and issues from a grassy bank. The well is dedicated to Mary Magdalene… and there was once a chapel to that Lady in a nearby village. A spring of clear water issues from the well to be collected in a stone basin sunk into the earth and surrounded by water mint. When it was cleared and excavated in the ‘sixties, fragments of medieval and Saxon or Roman pottery were found, suggesting the well has been in use for at least fifteen hundred years and very possibly longer. There were ribbons left as offerings when we visited and this well in particular has the feel of a sacred place… though to what god may be open to debate. Local legend says it is haunted by a white Lady… The Holy Wells that now bear the names and legends of the saints have, very often, an allegiance to the spirits of earth and water that predate the Christian story.

Here we filled the empty vessels we had carried throughout the weekend with the pure water of the spring. It was the final act of the Silent Eye weekend… though, for some of us, there was still a little time to share. With hugs all round and thanks to Steve for organising the weekend, we went our separate ways… knowing that it may not be too long before we meet again.