A few of us made our way down the stone steps of St Mary’s in Lastingham, into the crypt where the bones of St Cedd are reputedly buried. To do so is to step back in history and be outside of time; it is a place of quiet reflection, hallowed, one would like to think, by many centuries of prayer… except that, at one point, the crypt was supposed to have also been used as a cock-fighting arena… 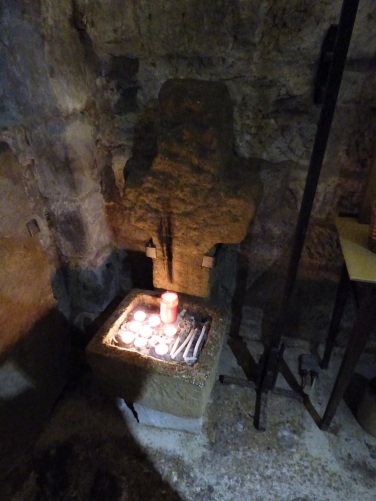 Nevertheless, it is the hallowing of space that strikes you… a place to which those of faith have made pilgrimage, when countless have prayed, whether to the God of the saint or to their own vision of divinity. There have always been many who can see beyond the labels of religion to the kernel of truth held in all.

The crypt is part of the original stone church mentioned by the Venerable Bede, built between 664 and 732,  and remains almost untouched since that time. Some believe the stone altar to be even older than the crypt and one single, carved oak beam remains from the early church. 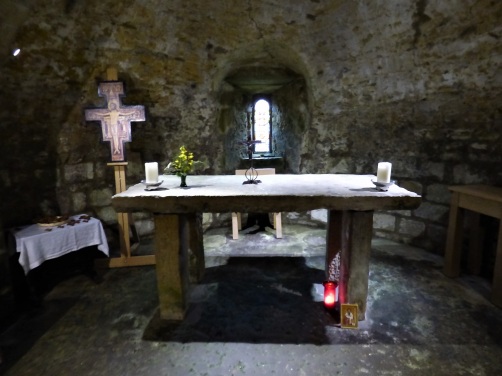 Each of the pillars supporting the vault is carved differently, with a disregard for symmetry typical of the period; artistically, symmetry seems to be a relatively modern concept. From the pillars of the cathedrals at Dunfermline and Durham, to the tiny Saxon crypt at Repton, we have seen this so often. Perhaps the designs had a meaning now lost… or perhaps it was simply the stonemason’s art at play.

There are carved stones and relics of a millennium and more of history ranged around the edges of the crypt, from an old, wooden burial bier to fragments of standing crosses, including the Ana Cross that once stood along the road we had just taken from the moors, to the arms of the great Lastingham Cross, now resting beside the bier.

There are a selection of gravemarkers, carved with crosses or, on one curious stone, what appears to be a chalice and sword as one, which, in esoteric terms, is suggestive of a  melding of the ‘masculine’ and dynamic energies with those that are ‘feminine’ and receptive… the agent of force and the vessel of form as one.

Perhaps the most curious thing, though, was the preponderance of serpents and dragons, from those intertwining up the face of an ancient stone, to the serpentine carvings in the church above and the dragons tucked away in a corner with fragments of masonry. What were they intended to symbolise? The many leys that have been dowsed and reported as meeting in the crypt? Or perhaps the streams that feed the four holy wells in the village? 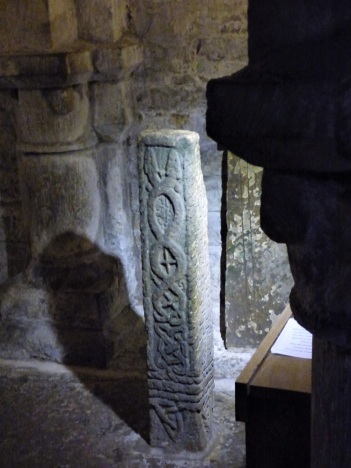 In spite of there being so much to see in the little crypt, though, its true invitation was to share its silence, in prayer or meditation. Whatever gods the stones now kept here may have served in the far distant past, all may be but fragmentary perceptions of the One, kindled by recognition and reverence to hold a spark of that something that shines in the depths of being.  Joined by the others, we lit our candles together and sent their warmth out into the world.

15 thoughts on “Whitby Weekend: The Crypt at Lastingham”