I dropped my companions at the next stop, the tiny, hidden hamlet of Part Mulgrave. They were to walk along the clifftops for a couple of miles… a walk I would have loved under normal circumstances… but once again, I was obliged to take the sensible option and the car. At least it wouldn’t hurt to have a vehicle poised at the other end of the trek.

Which left me with about an hour to kill, I thought, before meeting them all at the Cod and Lobster in Staithes. So, when I noticed the little church on my way back to the main road, it seemed a good idea to stop, especially as the nominal said it was dedicated to St Hilda, the erstwhile Abbess of Whitby.

The first recorded church in Hinderwell, a village named for the Saint, dates back to the twelfth century. The church that now stands on the site is a mere baby, dating from 1773. It was also locked, which was a disappointment… until I caught sight of an information board and followed its lead to an unexpected gift.

The story goes that, fourteen hundred years ago, the area was suffering the effects of drought, so the villagers petitioned St Hilda and asked her to intercede through prayer. Or else, that she was passing through the village and called forth the water. Either way, the spring was born in answer to her intercession and has flowed ever since, rising through the churchyard to become the main water source for the village for many years. It became a place of pilgrimage and its waters were credited with healing properties, especially for those with complaints of the eyes. 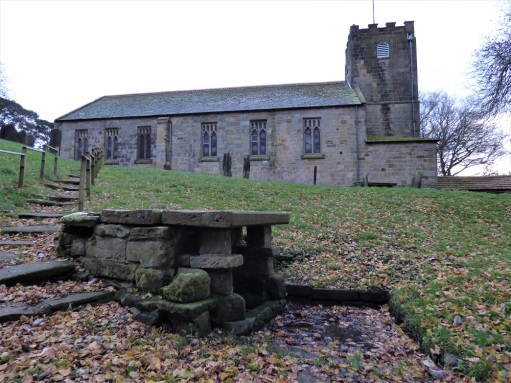 On Ascension Day every year, local children would bring a stoppered bottle with a stick of liquorice root inside, filling the bottle from the spring and shaking it to make a sweet drink. I remember chewing liquorice sticks as a child too, so smiled at the old custom. The event was called ‘Shaking Bottle Sunday’ and is still remembered with an alfresco service every year.

Much of the old well housing remains, though the facings were repaired and replaced by a local benefactor who shared the saint’s name, a weathered sandstone bowl still remains as part of the structure that seems older somehow.

It was a peaceful spot to while away a little time, with a beautiful old yew sheltering the church. I wondered, as I watched the water, just how old this ancient well might be, and whether it had always been the object of Christian veneration? When Hilda founded her Abbey in 657, Christianity was already the nominal religion in the area, but old beliefs die hard, especially in rural areas and close to the sea, where offending the Old Ones and the faery folk would have been seen as taking a needless risk.

Celtic Christianity had grown around the customs of the various tribal systems. It was, perhaps, closer to the earth and nature than the Roman canon. For many in the early faith, the Christ may have been seen as just another god to add to their pantheon… one whose story echoed those they already knew. The debates between the various religious and political hierarchies would barely have touched their lives. Faith was just something you lived. Whether you left an offering for the spirit of the spring or its saint, both the gift and the reverence would have been the same.

So it was with a sense of standing at the centre of a web of light that brought together many threads of faith and belief, across all of human history, that I poured the drops for the gods.