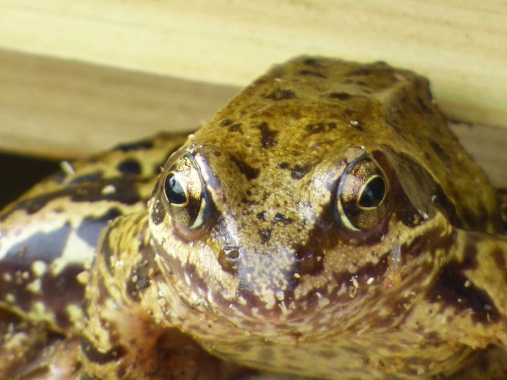 Before any time away from work, there are preparations to be made so that my son, his home and his fish can manage during my absence. Amongst other jobs, the fridge and freezer must be filled with home-cooked meals and snacks, the house needs to be cleaned, prepared and stocked with strategically placed supplies, the pond pumps and filter need to be maintained… and all elusive resident spiders caught and evicted from every room in my spider-fearing son’s home.

Food and other necessities having been organised, the pond was the last major task. I had already spent the previous two days lugging flagstones and great granite boulders to construct a waterfall. The first attempt, a joint effort with the builder, looked great but too heavy for where it was and I had to dismantle it the next day and begin to rebuild it. As I worked, ,I jumped at the unexpected frog beneath my palm that used my bare arm as a springboard, cringed at the lurkers on the wet granite and the wriggling things clinging to the fountain spout… but I persevered by pretending I could not see them.

But then the pumps needed cleaning…and it is a job I dread for several reasons. Not only do the heavy pumps have to be dragged from the depths, I also have to face a deep-seated fear… getting up close and personal with wet worms. Or, in this case, thousands of writhing leeches, huddling together in great squirming, glistening clusters.

I am not afraid of worms or even leeches…though heaven help the medical profession if they ever try to put one on my skin. It is an old problem that dates back, I believe, to my childhood. I don’t mind earthworms in earth. I even played with them and kept my own wormery when I was younger. But, around half a century ago, there was a morning after torrential rain, when the path to school was so completely covered in washed-out, pallid bodies that I could not take a step without squashing worms. Since then, I have a real phobia of wet worms…or anything that looks like one.

The first time I encountered wet, writhing bodies while cleaning the sump, I had to call in the cavalry in the shape of my younger son. I simply couldn’t do it. But that was never going to be a long-term solution; my younger son works long hours and my elder son was physically unable to help. I had to find a way.

Gradually, working on the principle of desensitisation, I learned to ride out the panic so that I could get the job done. It was never easy… the horror was always there, but, because it needed to be done, I did it… and was pretty sure I had, if not conquered the terror, at least brought it under control.

The pond flourished, becoming a rich and healthy ecosystem. The trouble is that the leeches have flourished too and, at this point in the year…at least, I hope it is only temporary… a dark, writhing, wriggling mass of tiny bodies covers every single surface of the pumps, their wires and hoses, both inside and out…and there is no way to avoid them at all. They get on your gloved hands, wash onto your feet, all over the path… and all you can see is squirming clumps.

The only other time I had ever had a full-blown panic attack was in the acute stage of PTSD, following the attack that left my son in a coma.  But, as I drew up the cord with which the pump is pulled from the water, hundreds of slimy bodies were being squished beneath my fingers. The pump went back in the water, I retreated, stripping off the leech-infested gloves, squealing, cringing and sobbing… and admitted defeat.

My son, who had never seen me like that before, realised that there is a vast difference between, say, a dislike of living with spiders and a phobia. He put on big gauntlets and rose to the occasion. When he drew out the pump and saw the extent of the leech infestation, he banished me to the other end of the garden and dealt with the task himself.

There was, I thought as I watched, feeling guilty at my inability to help and from a distance my eyes could not cross, a certain irony to the situation. We were readying the garden for my trip north to a Silent Eye workshop that was to start on Friday the thirteenth. Fear was to be a major theme of the weekend and one of the things we were to look at was how fear, generally seen as a negative reaction, can call us to serve a greater good.

I have been overcoming my reaction to the wet worms in the pumps, every week or two, for eight years now. There was no other practical choice; my son could not physically do the job alone, but both the health of his fish and Nick’s peace of mind depend upon it being done. I managed to find a way to go beyond my fear and do it to serve that need.

I could have done it this time too. Somehow. I would have found the courage…or bloody-minded stubbornness… to do the job, even if I’d done it in tears, squealing, heart pounding and panicking. ‘Can’t’ is often a lie we tell ourselves when what we really mean is that something is going to be so terribly hard that we really don’t want to attempt it.

I didn’t have to, because Nick faced his own fears…including the fact that he would fail and be unable to manage alone because his body does not work as it should; a far bigger fear to live with every day than my occasional terror of wet worms. But he did it for me and for the fish, taking over two hours to do a job that would normally take me a quarter of the time. He did it, in spite of the ‘can’t’ that often hovers around the edges of a life changed by injury.

It struck me that fear had served us both, albeit inadvertently. It was fear for the fish and Nick’s peace of mind that had made me address a greater fear and learn to cope with wet worms for so many years. Normally, I can do that. On this occasion, I was a quivering wreck… and my fear spurred Nick on to face his own, out of concern for me. It left him with the knowledge that he can do this if the need arises… which is a real reassurance.  And, if he can do this, what other can’ts may become cans?

Fear wears many faces… and can be debilitating whether we fear something physical or tenuous. While fear itself may always be a negative reaction, it can be put to good use. It not only preserves us from harm and teaches caution, but it can be the thrust-block that allows us to take a step beyond ourselves, to reach beyond fear or to serve or care for something other than ourselves.

As a prelude to the workshop, the day could hardly have been more apt…