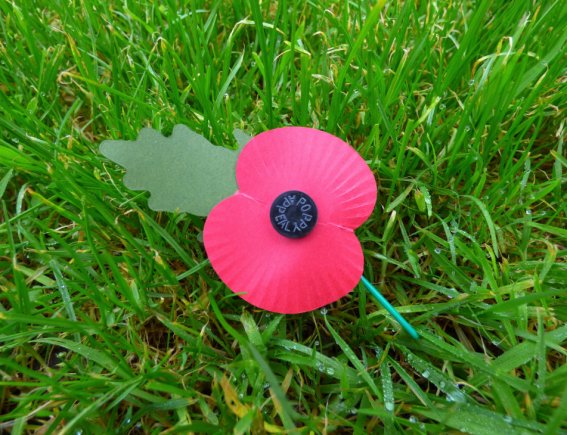 Paper poppies bloom, as fragile as the lives they represent. Every year it is the same, I try to find some way of saying what is in my heart and the words will not come.  I was not there, I have no right to speak of war and its atrocities. I have not seen it with my own eyes. I have never aimed a gun at another human being and been faced with the choice whether to kill or be killed. I have not tried to sleep in cold mud made from the earth of a foreign land mingled with the blood of my comrades. I have not lost my child to war.

I have no right to speak, but nor have I the right to remain silent when the price of my freedom to speak was so high. I have a duty to my own conscience and to all whose lives were given in service to their country or lost to the horror of some political expediency written in blood.

There are many tales of heroism and valour in the field, tales that highlight the beauty and nobility the human spirit can attain. But war is never beautiful, nor is it the glorious myth we have historically created when we need recruits.  War is born from the desire for power. Whether a formal declaration of war is made by the aggressor or the defenders, whether the war is fought for necessary or political resources, to uphold an ideal, for the betterment or protection of a way of life or for its imposition, the cause of every war is an idea…and ideas are born first in a single mind. For this single idea, or because we feel we must defend ourselves against it, we are prepared to sacrifice an entire generation, yet we will read about  tribes who sacrificed a single human life for the good of the community and call them barbaric.

Today, with our so-called smart weapons, we can obliterate a whole city remotely, not just one person, not even one generation, with the touch of a button.  Gruesome death is a constant on our TV and cinema screens, we even play games with it. The gift of life is cheapened and our reverence for human life seems a thing of the past. Yet that life is our own… and ironically, our fear of death seems to be greater now than ever before.

This year sees the centenary of the Battle of Passchendaele. There is no accepted figure for the number of lives lost in that one, appalling battle, though it is certain that over half a million men were killed, maimed or wounded. That we do not even know how many is perhaps commentary enough.

Harry Patch, who was the last surviving, fighting soldier from WWI, fought in that battle. He died in 2009 at the age of 111, and was given a military funeral at which he requested not even ceremonial guns be present. He had spent eighty years trying to forget the horrors of war, but when he reached a hundred years old and was brought to the eyes of the media, he was once again asked to remember…and for the last years of his life, he spoke of little else.

Harry believed that war was wrong and that a war that would eventually be settled around a table should be fought there and not cost millions of lives in something he saw as “nothing better than legalised mass murder”.

Harry was wounded at Passchendaele by a shell that killed three of his friends. A short while before his death he was asked what it felt like to be the last man alive to have fought in the trenches.

“I don’t like it,” he said. “I sit there and think. And some nights I dream – of that first battle. I can’t forget it.

“I fell in a trench. There was a fella there. He must have been about our age. He was ripped shoulder to waist with shrapnel. I held his hand for the last 60 seconds of his life. He only said one word: ‘Mother’. I didn’t see her, but she was there. No doubt about it. He passed from this life into the next, and it felt as if I was in God’s presence.

“I’ve never got over it. You never forget it. Never.”

He spoke of how, from arriving on the battlefield to leaving it, wounded, months later, he never had a bath or a change of clothes. He spoke the fear and of the choice between shooting to kill or to wound and the pact he had made with some of his comrades never to kill… a pact that could have had them shot by their own commanding officers.

He spoke of a horror many of us will never know or understand. He hoped we never would.

Across the world we turn to remember with respect those who served their countries or their ideals in the Great War ‘to end all wars’ a hundred years ago and in all the arenas of war ever since. Regardless of the reasons for going to war, the valour, the sacrifice and the suffering of those who serve cannot be denied. Every year, there are those who call for an end to our remembrance, saying that it is now old history and as relevant to our lives as the wars of Rome or ancient Greece. I will wear my poppy with millions of others in the hope that in remembering, we can learn from our bloody history… for we continue to write it.

The total number of military and civilian casualties in World War I was over 37 million. Over 16 million died and over 20 million were wounded.

The total number of casualties in WW2 is thought to be between 60,000,000 to 85,000,000. Such was the scale of that conflict there is a gap where we simply do not know… a gap of some 25 million. As if the entire population of New York simply disappeared.

And that doesn’t include the casualties who suffered horrendously but survived their wounds.

It doesn’t include the long term suffering of poverty, dispossession, or the racial and religious hatred that engenders or is engendered by war.

It doesn’t tell of the personal loss that touches all victims on all sides of a conflict… for they are all human beings, like you and me. It does not count the heartbreak of those who waited in vain for their children, siblings, parents and lovers to come home.

It doesn’t show the damage to the land, the mines that take lives long after the conflict has moved on, or the animals and birds decimated by bombing or being drafted into service.

The counts vary, depending upon who is doing the telling and why, but one thing they seem to agree on is that in total over 240 million men, women and children were killed in war in the 20th century.

And still it continues. Every day.

Since the beginning of recorded history major wars have killed an estimated four billion people… That figure is too vast for the mind to encompass. It is the equivalent of over half the human race alive today. Erase half of your family, half of the people you know or have ever known, half your friends… half your children. Then look at the cenotaphs or the names in the books of Remembrance. War does that to people.

We like to think of ourselves as an advanced civilised society… there has to be a better way and I hope and pray that, one day, we may find it.