The tiny airport was a refreshing change to the madness of modern flying, with its scarring signature of  ‘security’. You could imagine a kindly local lady rushing out and saying, “Hamish the Russian terrorist is on holiday today, so I’m just going to wave you through, dearies…”

There was, though, little distance to wave us through. Tiree is one of a pair of Scottish islands in this westernmost part of the Inner Hebrides – the other being Coll. Tiree is just twelve miles long and three across, and is relatively flat. It is renowned for its simple life, friendly people and beautiful beaches.

The main building of the airport comprises just three rooms: an arrivals/departures main space which doubles as the baggage arrival hall; an office for the staff and a departures lounge. Outside, a man in a transit van waited for our small party with four hybrid mountain bikes – part of the package trip and a great way (we hoped) to see the island in a day.

Our plane – an HS Twin Otter, sat on the tarmac outside the terminal, ready to take the six or so passengers who were now walking across the apron to climb its pull-down steps. An hour later, in the mirror of our inbound flight, they would be in Glasgow, having covered a distance that, on previous Scottish holidays, had taken us about ten hours by road and ferry.

The whole day-trip was a combined Christmas/birthday present from two long-standing friends who have drawn up their ‘bucket-list’, and asked us to share this part of it with them. We were delighted to be there. The four of us are happy with the idea of such an adventure, though the other couple have explored far-flung parts of the world with a fearlessness what we do not possess.

When you write blogs regularly you need inspiration. One of the most productive and creative methods I know to be inspired is to take a current theme to a new landscape and see what comes from the place. The trip to Tiree seemed ideal for this.

On the flight, as the green highlands, lakes and seaways drifted by far below, I emptied my mind to allow the ingress of the most ‘topical’ comments made, recently, by our Companions – those who take the three-year journey of spiritual self-discovery with us via our mentored correspondence course.

The answer that arose in my consciousness was an unlikely one: the topics of intrinsic perfection in the ‘world’ we experience and the idea within this of right action. It was unlikely because the simple landscape of Tiree was likely to be just that – simple and lacking in sophistication, though that was not expected to detract from its appeal.

The idea of perfection, in this context, is that the world is not as we initially see it, but ‘clouded over’ by lenses of the personality. Only by self-knowledge of how our daily ‘self’ has ‘hardened’ around a set of foundational reactions to life can we approach the cleaning of these lenses. When we do, we begin to see powerful changes in our lives – in fact, the world seems to change, whereas what is really happening is that we are seeing the truth for (possibly) the first time since early childhood – but with the gift of adult discrimination.

The idea of intrinsic perfection is that the above journey to great personal truth illustrates that the ordinary world does not ‘see’ what is before it. As we develop our ‘seeing’, we come to know it differently. Taken to the limit we perceive that what we experience when we don’t react in a habitual way is increasingly perfect, since it is driving the personal evolution of so many incarnated souls…

The idea can produce a lively debate, as you can imagine, so it is generally reserved for the third year of our three-year guided journey, where it forms one of nine ways of considering ‘objective reality’ – that which simply is – beyond personal opinion.

Leaving Tiree’s tiny but wonderful airport, we collected the bikes, turned left towards the island’s circular coastal road and, within five minutes, found ourselves at the main junction and beside a lovely beach. 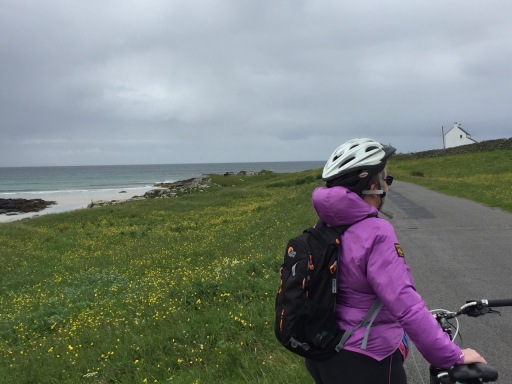 As the photo of Bernie (above) shows, the weather was worsening, with a stiff breeze coming off the sea. With some trepidation, we began to pedal away from the relative familiarity of the airport’s grounds and into the darkening unknown.

The small plane that had brought us to Tiree did not have provision for refreshments – the co-pilot came out of the cabin and read out the safety notice before we took off, then returned to help the captain fly the plane! By the time we encountered the beach road, we had all decided that an early cup of coffee with a comprehensive look at the map would be very welcome – as well as giving us a potential place of shelter in the event of a downpour.

Our opening few miles were quite difficult. The wind off the sea was brisk, to say the least. This was in stark contrast to the weather we had left in Cumbria, which, for once, had been warm and sunny!

One of our group hadn’t ridden a bike for many years and needed a settling-in period, which was duly provided. They quickly recovered cycling skills that few really forget and, despite the constant stream of cars from the ferry port – indicating the arrival of the other form of transport to the island – we made our way, with increasing smiles, to the tiny village of Balemartine, where the map said, there was one of the island’s cafes.

We had initially missed the cafe. Only the signpost alerted us to our error and we doubled back to find it just opening, which was just as well as the heavens opened and we fell into its welcoming and well-staffed embrace. I was last in, as I wanted to check the bikes were not intruding on the parking space. And then Henrietta, was we came to know her, joined us to guard the cycles. She stayed nearby for the whole time we were in there.

Steve Tanham is a director of the Silent Eye school of Consciousness. His personal blog is at stevetanham.wordpress.com

11 thoughts on “Bright in the dark: endeavour and the lighthouse”