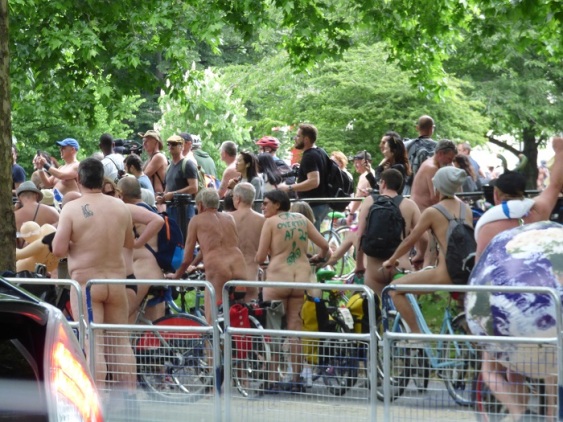 There are a lot of things that I could write about the Blogger’s Bash…and doubtless many will be writing about it for some time to come, but if I were to choose the one, overriding image of the  day, it could only be the naked people.

Granted, the ones we actually met were not quite as naked as those we passed outside Buckingham Palace. It was an unexpected sight in central London… hordes of  them, all riding bikes…and the police did not appear to mind! Although thankfully, the day was gloriously warm, it made no sense whatsoever. It was not until a bit of judicious Googling revealed that this was the annual Naked Bike Ride, an environmental protest against the car-based culture of our world, that it all fell into place. The ride is a community event that promotes human-powered modes of transport, as well as a body-positive image…and very effectively raises awareness of the cyclists on our roads.

The people we had come to meet, though also a community, were fully clothed… but in many ways, just as naked. From the moment you walked through the door, you were greeted with smiles and buried in hugs.  You knew you were amongst friends… even though many of those present had never met each other before in person. There was a genuine excitement at meeting old friends and finally meeting people with whom you have only spoken online… and no sense whatsoever of the awkwardness that often attends first encounters.

It is quite odd, in some respects, when you consider that most of those present were writers, of whom the stereotype is that of the introvert… you would not have thought so for one minute, as everyone launched straight into getting better acquainted and simply opened their arms and let people in. The barriers were down.

I find that beautiful.

Any community shares a common link somewhere. Many communities seem to be closed, focussed inwards on a central goal. One might expect a room full of writers to be a room full of people simply trying to promote their own work. Instead, you had a crowd of people open to sharing… from cakes to knowledge, from smiles to  confidences… all of them open to each other. That made it a gathering of friends. I have seen the blogging community act together to move mountains, and seen the small daily kindnesses of helping hands and words of encouragement.

In a world where, very often, we shy away from each other, here was a group of people, many of them technically strangers to each other, but open to the intimate connection of a hug. That is, in itself, an expression of trust for we are, in a way, both naked and vulnerable when we open our selves to others. But it didn’t end there… People share something of themselves and their lives online, often in greater depth than we would do face to face with a total stranger or a new acquaintance. Everyone had a place to start; in my case, I am not at all certain whether it is my son or my dog who is the most well-known fact of my life. One or both of them entered almost every conversation very early. Our absent partner was asked after, health, house moves and passions were known…and it is surprising how much we all knew about each other. It gives the lie to those who believe that what is read online is not remembered or assimilated. At least where people are concerned, we learn and remember… and at events such as this, it really shows.