There are at least three dimensions to one of the Silent Eye’s discovery weekends. There’s the place itself, with its features – ancient and modern; there’s the social side, most present in the evening when we mellow into the chosen restaurant and share good food and a glass or two of wine; and then, there’s the way the whole event unfolds, which is the most important of all.

Good unfolding is the essence of a good weekend, and it does not come about by accident. For “Of Ash and Seed’ The organisers made two separate trips to Anglesey during the year leading up to December’s pre-solstice weekend. Each time we were ‘sensing’ how the plans would flow into a near-solstice day which is very short. We work on the basis that, social time, aside, December allows us only the daytime hours of ten till four and then the darkness wraps around us.

If the weather is foul, as last year’s was, then we also need places of retreat along the way. Last year, for example, the long-term forecast was dreadful so we booked a Christmas lunch at a nearby pub (The Jolly Crofters, Bolton) – one on the same height level as the top of Leverhulme’s gardens, leaving us only to stagger through the gale force storm to get to it…

But even those grumbling by then were the first to admit that it made the day very special.

When you start planning such an event, you look a the meagre list of places you want to include and your first thought is: there’s not enough! That won’t fill a day and we’ll have a ring of people looking expectantly at the sodden itinerary that has just been raced through…

Cafés…. I confess to finding great happiness in cafés, liberally scattered through the day so that a pleasant half hour can be spent out of the wind, rain or sandstorm… Can’t beat it. They also come in handy when you’ve lost the leader of your party and you need to wait somewhere predictable so you can be found. I’m very predictable… you’ll always find me in a café – ideally one that (rapidly) serves big pots of tea, with anytime cream teas… I’m a simple soul.

The climb back up South Stack, with its four hundred-plus steps, is demanding, but there were many stopping places where we could rest the legs and take in the splendour of the views. Being December, bird life – in abundance on the RSPB cliffs during the warmer months – was scarce, though several beautiful choughs, with their orange-red beaks, were gaily in abundance.

It is important to go at the pace of the slowest, and we take that seriously. This is why such days need to have lots of ‘elastic’ in them – think tea rooms… 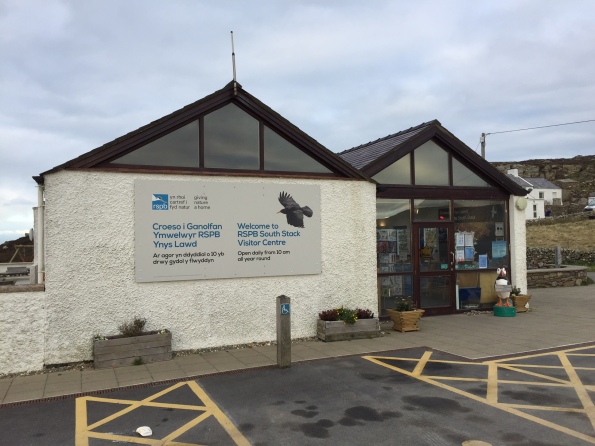 The RSPB café, part of the visitor centre, is just down the road from the top of the South Stack steps and well-placed. Gratefully, we trundled in and the sound of relatively happy people sipping good tea and coffee was soon to be heard. The day was going well… allowing for the aches and groans the four-hundred steps were always going to induce.

For those deeply into the mysteries of the ancient landscape, there was a treat in store, just across the road from the cafe.

The Holyhead Mountain Hut Circles Group, to give it its full name, is the remains of about twenty dry-stone-built huts and associated field systems, belonging to a series of prehistoric and later farmsteads. I could go on to describe it, but Sue has done such a good job with her post of the 13th December, that I can simply put in the link, here… and add a few photos of my own: 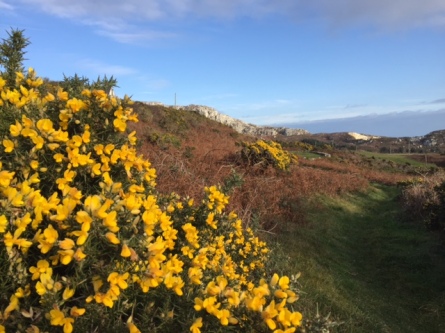 The last photo – of the gorse and the site of the ancient fortification – marked a particularly poignant moment. Having discovered that there had been a hill fort on the top of Holyhead mountain, I could imagine how warrior guards would have been stationed up there, in the freezing and exposed conditions of winter, to guard over the settlement below. The mountain offers views right across to Ireland, on a clear day, and history records that it was a point of security of both Druid and, subsequently, Roman guards.

The lasting impression of this place was one of peace. Despite the settlement being very old, there remains a feeling of great tranquility, as though it is still lived in, in some form. You get the other-worldly feeling that its inhabitants were happy here, under whichever guardian paced the mountain fort, above…

Our own offerings to this lovely settlement took the form of poetry and the first of three scrolls between a Roman Centurion, Amathus, and a Druid High Priestess, Camma. Amathus, the centurion, had spent time in his wandering youth and fallen in love with the Druid tribe who adopted and trained him in their lore and wisdom.

Later, his travels took him away, but his skills saw him co-opted as centurion into the Roman Legion of Seutonius Paulinus, the much-feared leader of Rome’s campaigns in Africa, now sent to exterminate the last of the Duids, shored up on the Ynys Môn–present-day Anglesey.

These scrolls, which were to foreshadow the playing out of a tragic sacrificial death at Bryn Celli Ddu on our Sunday morning, were published in the run-up to the weekend and can be read here.

Another tearoom beckoned, one next to the beach in the lovely coastal town of Rhosneigr, but before that, we needed to visit a mysterious dolmen in the middle of an easy-access, but muddy, field.

To be continued in Part Three

Previous Parts of this series of blogs:

The Silent Eye School of Consciousness offers a low-cost, three-year home study programme which delivers a deep and experiential understanding of the human spiritual journey using the Magical Enneagram.

For more information, email us at rivingtide@gmail.com.