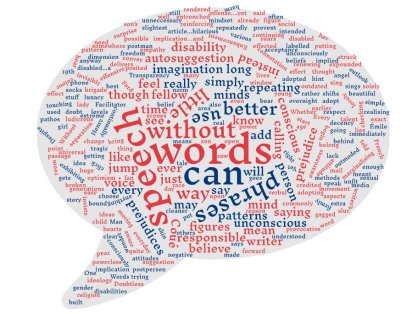 “It really gets to me,” said my son, checking his phone as I was putting his socks on.

“Words… stuff like this…” He read me a passage from social media. I immediately saw what he meant. It was story about a little girl with a beautiful voice. It was a touching enough tale, without the need of the writer to add pathos. ‘Despite her disabilities’ we were told, she sings like an angel.

I could see my son’s point, but he expounded anyway. Why should having a disability mean that she shouldn’t have a lovely voice? Doubtless the writer was only trying to add an extra dimension to her talent. Without any doubt at all there had been no thought of marginalising any further a young lady already labelled as disabled…a word that means broken, unfit for use, rendered powerless… It was simply a figure of speech with no harm intended or implied. Yet the implication is clear, somewhere in the writer’s mind, there was surprise that a disabled child could sing so well.

What struck me once again was how many preconceptions and prejudices are built into our language. They may not even be our own, just ‘figures of speech’ for which we have few, or no, alternatives; phrases we have learned growing up and have simply accepted as being the norm because that is what everyone around us says, without ever thinking of the underlying implications.

One of the problems lies in how easy it is to hurt or offend a listener. You may know what you mean… they can only know what they see and hear. While we are not responsible for another’s reaction to our words, we are solely responsible for what we say and how.

Disability is something my son and I have become quite sensitive to over the past few years. We don’t jump on every imagined slight or slur, for the simple reason that we too have used those exact same figures of speech ourselves, often still do, without ever realising what effect they have on either our listeners or our outlook. It isn’t just disability though; in any area where there is room for prejudice… race, colour, religion, ideology, sexual orientation, age or gender… we have words and phrases that invisibly separate ‘them’ from ‘us’. Most of the time, their use is unconscious and completely innocent of offense… no more than a habitual pattern of words.

In the 19th century, French psychologist Émile Coué famously introduced the idea of conscious autosuggestion, “Every day, in every way, I’m getting better and better”. By repeating the words over and over, the mind adopted an attitude of optimism. Coué posited that real change is effected at the unconscious levels through the imagination, rather than by an effort of conscious will and various methods of suggestion and autosuggestion have made their way into our everyday lives. Henry Ford is also commonly credited with saying, “Whether you believe you can do a thing or not, you are right.” The power of the imagination over belief has been understood for a very long time. If we are continually repeating words and phrases that bear a negative connotation, instead of moving forward and adopting a more open and universal mindset, are we repeatedly renewing the outmoded prejudices and conditioning that are unconsciously entrenched in our minds?

The ‘PC’ brigade jump on us for calling the person who delivers the mail the postman instead of the postperson and insists upon other such ludicrous and unnecessary shifts in our speech to prevent the slightest possible hint of offense….yet behind the scenes, we are continuing with patterns of speech that convey outdated ideas and a lack of acceptance of our fellow Man (or should that be fellow person?) that belong to earlier generations and attitudes. I have to wonder what beliefs we are reinforcing by our use of phrases of verbal separation.

I am not a huge fan of the lunacy of the more extreme aspects of the PC movement. The freedom to speak what is in our minds and hearts should not be bound and gagged, though I firmly believe that we can best do so without being offensive, provocative or exhibiting prejudice. A little respect and decency goes a long way. We are not going to adopt consciously better patterns of speech overnight, any more than we will start calling our Transparency Enhancement Facilitator* anything other than the window cleaner. What we can do is bring a little awareness and empathy to what we say and the words we choose. We can begin to be aware of what it is that we are really saying, both in words and by implication… and put ourselves in the skin of others and feel what they feel.

* Do click through to the article…hilarious and tragic, all at once.