I was dismayed to see how few places were selling poppies this year. It used to be that there was nowhere you could not buy one. This year, I had to look. And yet, in almost every town and village today, there will be poppies. Not just in this country, but in many others around the world. Paper symbols that defy the divisions created by borders and unite us in a common act of remembrance and gratitude for those who risked and gave their lives that the next generations might be born into a free world.

We do not remember some mythical conflict that glorifies the horrors of war. We remember those who fought, men and women, even animals. We remember that of those who went to war, many did not return. Some were volunteers, others conscripted…. to many were little more than children, just teenagers.  All faced death, mutilation, and horror. All faced the same guns.

Violence, even on the level of nations, can never be right. It is not a good answer, though sometimes it has been seen as the only answer or defence against a greater evil. Today, that argument has no place. We are not remembering the policies or the politics of war… we remember those who gave all they were for their country, their homes and their people.

We remember too those whose battle was not fought with guns. The women who waited for their husbands, fathers and sons. The women who wept and cradled a photograph as they had cradled their babe. The children whose fathers and brothers never came home. Those whose homes and families were obliterated by bombs. Those who took in refugees from the cities and from overseas. Those who filled the gaps left in daily life by those who would not return. 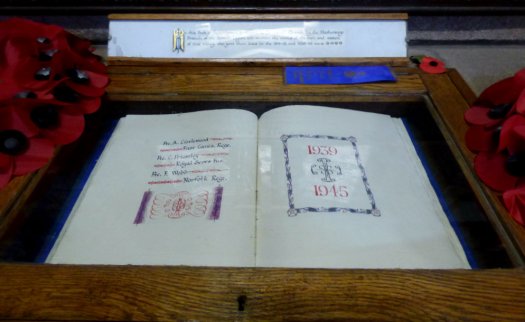 In every town and village there is a roll of honour listing the names of the lost. Sometimes on a cenotaph, sometimes a book or a plaque in the parish church. Few, even the smallest hamlets, were left untouched. In the village where I live, the Roll of Honour lists 80 names, some as young as eighteen, many from families who still live here, whose names and youngsters I know. Today, the population is around six hundred households. At the time of the war, it was a much smaller place. Generations of men, fathers, brothers and sons, we killed, leaving a deep scar on the life of this one small village. Across the world, it is a story that was repeated. Few were left untouched and many of us knew those who had fought…and whose silences told more than their stories ever could.

We do not even know the full total of those whose lives have been lost to conflict since the onset of the First World War. The total is thought to be around 200 million lives, including those deaths listed as collateral damage, which are considered to be ‘an unavoidable, legitimate byproduct of waging war’. Men, women, children… just ‘collateral damage’…

Today we remember the dead, the wounded, the maimed… all who served, at home or overseas no matter what their country of origin, no matter what their faith or belief. We may think back and recall the stories we have heard of personal valour and heroism, of compassion and camaraderie, of kindness and resilience. It is there that the only glory of war can be found…in the heart of individuals, in humanity…and it is there that peace has its roots. Mankind is capable of greatness, but not through destruction.

For a little while today, we will stand in peace and unity to remember the dead. We remember them in the name of the peace they sought to win.

“At the going down of the sun and in the morning
We will remember them.”