She orders him around unmercifully while he looks at her with utter adoration in his eyes.  If ordering does not work, she brings out the secret weapon…the smile, the cheeky glance from beneath her eyelashes. Very seldom does she resort to tears. But, at almost two years old, my granddaughter has all the fabled feminine wiles and knows just how to use them on her father. It is to my son’s credit that he manages to maintain discipline and say ‘no’ when he must, in spite of her entreaties and blandishments. It is one of the earliest lessons she will learn…we do not always get what we want, but will undoubtedly get what is needed, like it or not.

Watching her play with friends, you can already see the dynamics of adulthood begin to form in her interactions with others. You can see the first shoots of her own strength of character and begin to see how she will face the world when she is older. You can discern, too, the lessons she is being taught as she plays, learning the basis of the rules by which society is bound in order to live together in any kind of harmony.

It is through play that a child first learns about sharing, generosity and patience…and about letting go. Determination, the necessity to keep on trying till you get things right and how to read the intentions of others are also learned early. At not-quite-two, Hollie is old enough to understand games of ‘let’s pretend’ and serves you tea in empty cups. She sings, dances and laughs… but she is not yet old enough to understand being teased; her language and social skills have not yet reached far enough to allow her to tell the difference. That too will come as she continues to learn. The subtleties of expression and tone will slowly unfold, page by page, until understanding people becomes second nature and she will know the difference between the gentle teasing of affection and the barbs of self-interest.

Or so I hope… she is a gregarious young lady and grows secure in the love that surrounds her. That will not prevent her from meeting those whose motives are not so gentle. The teasing and the games will not always spring from love…there will be barbs, unkindness and jealousies. Especially if she has siblings. But that too is part of the learning process and, when learned early, allows a child to grow with enough discernment to tell the difference and sufficient tools to deal with whatever social situations may throw at them. 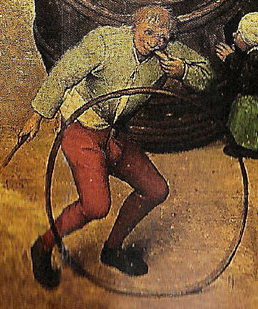 Play seems to be something we just know how to do as youngsters. We may have to learn the various games, but the spirit of play is innate. You have only to watch young animals to realise that there must be an evolutionary benefit to play or it would have been discarded with other redundant behaviours. With our growing understanding of the mind we can understand how empathy, cooperation and compassion many be rooted in early games.

When Pieter Breughel painted ‘Children’s Games’ in the 16th century, the faces of the children were shown with expressions as serious as if they were adults going about their daily toil. The painting held a moral, a commonly held belief at the time that a child’s game is as important to the mind of God as anything an adult might do. More recently, science is recognising the importance of play, in adult lives too.

The necessity and the richness of experience gained through play is something we understand for children, but that we ourselves leave behind, more often than not, when we set about the serious business of adulthood. Play is seen as a pointless and purposeless waste of our time. Apart from those sports that attract so much money and attention, and which, by their competitive nature do not really qualify, play is often deemed unseemly for adults. Yet it is that very pointlessness that makes play a time out of time, a release from stress and relief from the pressures of adulthood, that can render it so valuable.

There is no hard and fast definition of the verb to play. The dictionaries describe rather than define it as ‘engaging in activity for enjoyment and recreation rather than a serious or practical purpose’. It is something that gives pleasure, attaches no real importance to a competitive element and is both flexible and voluntary. For adults it is also a time when the constraints of adulthood can be left behind, even when engaged in ostensibly adult activities. It may be difficult to define…but you know when you are doing it.

The psychological and physical benefits of play for adults have been studied and are well documented. The spiritual benefits of play are not difficult to see. There is a well-known biblical reference to becoming ‘as a little child’ in order to enter heaven. The next verse suggests that those who adopt the humility of a child,  will reach a higher state than those who cannot do so. There is an innocence to child-like play that leaves behind the ego and allows is to be Fools…and enjoy the process. There is a real humility in that.

In an area of life where ‘know thyself’ is one of the first maxims we come across, play allows us to tease apart gently the strands of who we are, putting aside the acquired masks that we wear to face the world and finding access to the child within. This child-self the key to understanding how we have become who we are. there is little guile in a child and nowhere to hide from the clarity of their gaze. It is possible that this inner child is the real adult in our internal relationship with ourself and has a wisdom greater than our acquired knowledge.

The lessons of childhood do not have to remain there. Empathy, creativity, and an openness to the world can still come to us through play. The inner child is a part of us that will always have access to wonder and delight… and to that ‘lightness of being’ that is the result of both play and the spiritual journey.