Where my heart would speak I must make my rank as Roman soldier talk in bitter tones. I long to place my arms around you, once again, and protect you from what is coming, but we have little time.

Suetonius Paulinus, a veteran of campaigns in North Africa, and much honoured in Rome, makes his way north, in haste, and means to cross the treacherous straits to Môna Insula with infantry and cavalry. His reputation is a bloody one and I fear for your people.

How little he knows of them! Would that I could open to him the gifts of my time with your tribe of Druids and show him the gentle and cultured face of those whose defiance and bravery have caused such fear in the hearts of the sons of Rome.

Alas, I may not tell my own story. Suetonius Paulinus can never know of the time a new priestess befriended a young traveller, a man between worlds and searching for meaning. He can never know how you and your people made him one of your own, before his returning wanderlust set his immature mind and heart on other paths…

How cruel that those other paths and lands would see him earn a reputation as a learned scholar, capable of many tongues, a man who was also gifted in close combat – born of too many encounters with thieves and rogues on the long journeys of discovery.

How cruel that the fates now cast him absorbed into Rome’s vast army and commanding a hundred soldiers, soon to unite with Suetonius Paulinus’ army which comes to slaughter you and your brethren…

Let me help you, beloved of my youth! Let me lead you from Môna Insula to a place of safety. Be certain, my love, that he means to put you all to the sword and the flames; and also to destroy your sacred groves and defile your ancient pools.

Nothing will be spared.

He plans to be at the straits of Môna Insula by the next full moon. Let this secret scroll, carried by a runner braver than I, be your way back from the jaws of death. Send me your answer at once. The runner will wait.

Môna Insula was the Roman word for the Isle of Anglesey, the location for the Silent Eye’s December 2016 pre-Solstice weekend and the last stronghold of the Druids in A.D. 60. 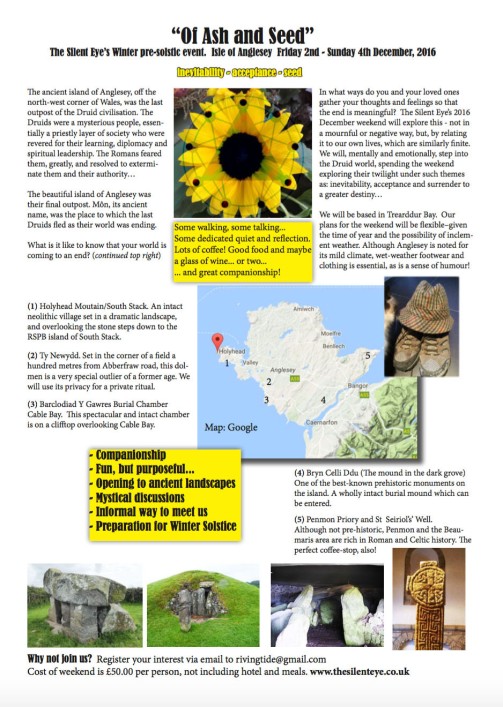