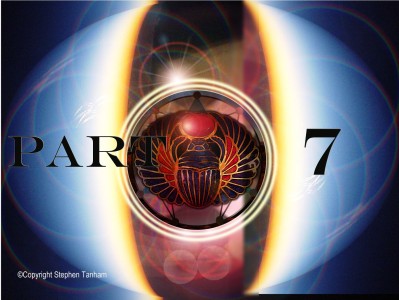 Part Seven of The Unseen Sea

The life force – the will to survive that had become LUCA – found that her life was contained in a bubble. She had no conception that the bubble was based on a circle, but circular forces were, indeed, at work within her.

The bubble that was a sphere defined her boundaries; those vital walls that kept her separated ‘self’ safe from the outside. In-here was safe. Out there was essential for food and the expulsion of waste. Out there, in an ironic twist, was potentially deadly to her wellbeing.

Out-there was where she had come from, and yet it now represented the place of threat – the unknown enemy of her new body. These concepts were chemical; but something different had happened: the proto-life that was LUCA had moved from organic chemistry to something of a higher level of organisation. ‘Life to be’ had found a better vehicle; or had it constructed it according to some higher blueprint contained in matter, itself?

Science admits of no such principle, and, now, despite such shocks as Quantum theory, searches only for confirmation of a blind universe, in which random mutations are the key to a triumph in the race to reproduce.

But we are free to examine whether evolution has a purpose, if we wish…

In our narrative, although LUCA’s interior world was spherical, the processes controlling her evolution can be described in a circular model.

In place of what we would call fear or anxiety, there was a directive; implemented in a spiral of chemical process. This spiral of RNA would one day become the DNA of the plant, animal and, eventually, human world. Only recently have we become equipped to consider the whole position of the vast curve from LUCA to ourselves. 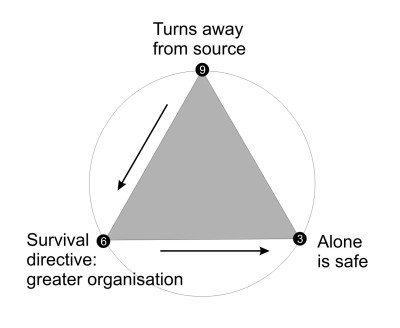 In this way, sadly and inevitably, she turned away from that which had given her life and focussed on the internal processes that would strengthen her structure; and one day, turn her single cell into something very much more complex.

Organisation appears to be closely linked with Mind. The better organised molecules that composed the RNA spiral at the heart of LUCA became the means which enabled everything that followed in the chain of life.

Three billion years later, Grandad Lucca and his family will inherit both the survival directive of the single cell – expanded into a machine that can carry out ‘what ifs’ – the brain. But most of its energies will still be locked into a cycle of being that mirrors the original response of LUCA, as she came to terms with her isolation.

Fear is a potent driver, but just as its early incarnation as the directive of survival served LUCA at the levels of the most basic cellular biology, so it is our nemesis when we enter a true search for the origin and purpose of our own, subjective lives.

The diagram, above, is not only the original story of LUCA, it is the basis of how the enneagram describes our coming into physical being.

But it is just the start of that story…

Read the previous parts of this series: