There were two ships on that day, each of them spoke of other dimensions…One completed our journey back from Caldey, in a way that could only be seen as symbolic. The other was the vessel called St Illtud’s church, whose foundations, and, perhaps some of the contents, had carried the ancient wisdom of the sixth century and beyond, so that we could gaze on it today with something approaching wonder.

St Sampson (above) was the first Abbot of Caldey island. He established the 6th Century Celtic Christian church, and later, its monastery, on the site that is now a ruin, apart from the outbuildings which form the perfume factory and the church of St Illtud.

The latter is mysterious home of everything talked about in this post. St Illtud was the founding ‘father’ of the Celtic church in this part of Wales, and his personal influence spread as far south as Brittany. It was fitting and generous, therefore, that the Cistercian fathers who took over Caldey’s Benedictine Monastery in 1930 should re-name the original church of St Mary, which stood on the site of Samson’s monastery, St Illtud’s.

(the previous posts have discussed the history of worship on Caldey, see the foot of the post for fast links)

There is a growing interest in Celtic Christianity. Many see joy in its directness of worship and its sexual equality, and much spiritual vitality is seen in its art, such as the wonderfully ‘illuminated’ Lindisfarne Gospels. Celtic Christianity, derived from the Eastern Christian tradition and influenced by the Desert Fathers, was heavily oriented towards the works of John the Evangelist, which are widely seen as the most mystical of the Gospels.

To quote from Andrew Dunn, an authority on the role of Celtic thought within modern Christianity:

“The Johannine emphases on the presence of God among us, the Word made Flesh, the Spirit who has come in Jesus’ name, the risen Lord speaking to his Church and drawing it, and all believers, into union with him (“Abide in me and I in you . . . without me you can do nothing”1) – all moulded the Celtic way.”

Celtic Christianity flourished on the fringes of Britain – particularly in the West, coming here from Ireland, and, prior to that, from the Eastern Church via Brittany, where there were training schools for early priests who would spread the word of the original church.

The Synod of Whitby, in 664 A.D., marked the official end of the endorsement of what we now call Celtic Christianity. It was gradually replaced by the Roman view of how Christ’s life should be viewed and emulated. But the Celtic Christian faith did not die out quickly, instead, it went underground, and continued to flourish for hundred of years in those Western reaches that had given it its early life.

Prior to all this, the people we now view as the original ‘Celts’ had been quick to adopt it. In their turn, the descendants of these people were keen to defend it, seeing in it a vital link to their forebears’ beliefs that nature was the ‘Second Book’ and that an understanding of the Divine Feminine was key to finding the ‘spirit’ in the world.

Rome took a different view and, even today, wrestles with the results…

When great beauty is expressed as spiritual art, as it has been from time immemorial, it presents the observer with an experience, rather than a seen thing. In the Silent Eye, we honour many of the ideas of the philosopher Gurdjieff, including his statement that such art reaches inner parts of our consciousness because it is objective – that is, it speaks an exact truth which is beyond the filters of belief, thought and prejudice applied by the subjective ego.

To create objective art requires that the ‘artist’ bring it into existence with this purpose in mind; and that such creators are then assisted by the innate power of truth in a creative process that can easily be seen as religious, but which can be described in many other ways, too, including those used by mystics. The inner cores of the world’s religions have always stressed that there is only one truth – and many windows through which it may be viewed.

In the Silent Eye, we use the ‘stations’ of the enneagram as, firstly subjective, and latterly, objective windows by which the evolving soul can come to gaze on the beauty of its origins…

There are three wonderful elements of St Illtud’s church that speak of what I have come to think of as its spiritual ‘playfulness’ of purpose. One is the Caldey Stone, with its Ogham script, introduced in the last post; the second is a set of plaster engravings which depict very early Christian images; and the final one is a magnificent stained-glass window of St Illtud, himself – but with a very mysterious subtext…

We will consider the Caldey Stone in this post and conclude the series next time with a look at the other two. 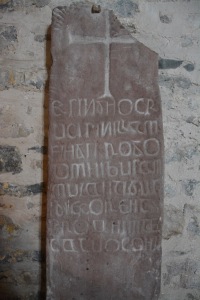 As far as is known, the Caldey Stone was dug up in the old priory grounds in the 18th century. Local records from the time quote and elderly islander, ‘Ned of Caldey’, as saying that other inscribed stones had existed on the island; but none have ever been found.

The ancient Ogham script was used by the Druids and comprises a series of notches on the edge of the stone. The Caldey Stone, which has both Ogham and Latin inscribed on it, has been translated in several ways. One of the most respected experts, Professor Burkitt, translated the opening words as “With the sign of the cross, I, Illtud, have fashioned this monument.” This interpretation would date the Latin text to the time of St Illtud, who died in around A.D. 535.

But the Caldey Stone is only a single artefact. Around the lower parts of the walls of the Sanctuary in St Illtud’s lower walls sit over twenty plaster reproductions of ancient Christian art, and some of these are very enigmatic, indeed…

Previous parts of this series: