I had to crouch down to get the shot of the ancient sun, above. These wonders of ancient history occupy a very quiet place on Caldey Island, one I had stumbled across eight years ago, when we paid our first visit here. Then, the twenty or so plaster (reproduction) engravings were simply white and dusty and looked very neglected. Since then, someone has lovingly decorated them in red and gold.

They were the reason I had come back to Caldey. I remembered the chill of delight that ran down my spine as I first bent down with my camera, brushing dust and cobwebs off the old stone. Now I was back – and someone else had been back, too; someone official.

But let’s take this one step at a time; and return to where we left off: the eastward side of the main Abbey buildings.

St David’s church stands outside the main Abbey enclosure. The Cistercian monks carry out their devotions in their own building, known as the Abbey Church. This was built by the earlier Benedictine monks in 1910. The Abbey Church is the eastern edge of the monastery cloister and was the first part of the Italianate-styled complex. The exterior has changed little, but the interior is far removed from its grand initial design, which burned down during a catastrophic fire in 1940. Today it is a very plain place, but no less sacred for that…

Between these devotions, the monks work, study and, occasionally, eat. They are vegetarian.

Descending from the Abbey buildings, back to the common below, the path intersects a track that crosses over the raised spine of the island.

The climb takes you into what feels like a much less cultivated part of Caldey, ending on the headland at the place of the Caldey Lighthouse, beyond which there is only the ocean and… Devon.

But, about half way up the steep track, on the Western side, there is something remarkable… 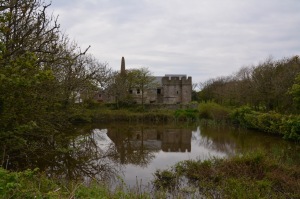 A bank of once-tended gardens, with two of their own small lakes, marks the edge of a former area of cultivation.

An old stone circle – presumably a copy, but who knows? – lies, overgrown at the edge of a set of what look like grandly facaded farm buildings… and they are; but once, they were something else, something very different…

The spire gives it away – as a former church. But this complex of stone buildings, which for centuries has been used as a farm and, latterly, as the island’s perfume ‘factory’ is the site of the original Celtic Monastery which once went by the name of Our Lady Mary’s, and is now known, in honour of the saint who sponsored the original Celtic Christian presence on Caldey, as St Illtud’s Church.

Entering this very special place, you can feel the necessary division between the life of the Abbey, and its focus on the Cistercian Rule; and the more ancient worship of the Celtic Christian world.

St. Illtud’s Church is built on the ruins of the 6th century, original Celtic church and its monastery. Many believe that elements of the original buildings were incorporated into what survives. The most famous artefact, mounted on the wall for all to see and, delightfully, touch, is the Caldey Stone, which contains the ancient Druidic Ogham script (above). 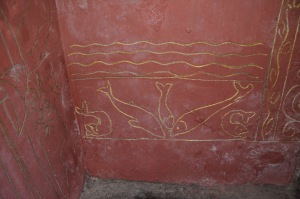 There is also a mysterious stained-glass window (more next time on this) that links the once-Celtic church to the Arthurian legends; and finally, there is that remarkable set of plaster reproduction designs that someone has so wonderfully kept alive to remind us of the most ancient of Christian thoughts and symbols from an age which remembered the teachings of two thousand years ago…

Previous parts of this series: