There is something about a map, a proper, paper map, that makes a journey personal. We don’t tend to use sat-nav, resorting to such technologies only when cities force us to do so… and we had invested in a brand new map too, the other one having been worn to shreds over the past couple of years. So, instead of following the directions given by the leader of the expedition, we took the winding backroads to get to the last site of the day and arrived there a little while before the others. We killed a little time by snacking on the remains of lunch, then had a wander up the path to wait outside the tower.

Time, though, was getting on. Knowing Steve had been really impressed by this place and worried that it might close before the others arrived and we had chance to see it properly, we decided to go inside. They couldn’t close the place while we were in it, and we would have hated to miss it, so it seemed the best thing to do. 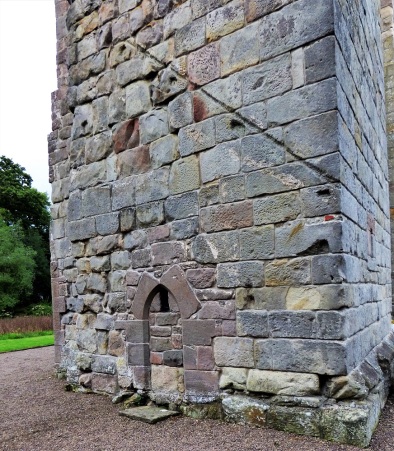 Preston Tower is a pele tower, built between 1392 and 1399 to give the alarm and protect its people when Scotland and England were in an almost constant state of war. It looks like a miniature fortress and that is exactly what it is. Built with walls seven feet thick to withstand attack, a small postern door through which the animals could be brought inside in case of danger, and with tiny windows that could be blocked in case marauders attempted to smoke out those within, it seems almost impregnable.

In later years, the most common problem was caused by the depredations of Border Reivers, the cattle rustlers from across the Border between England and Scotland, whose lands were seldom enough to support their clans as all estates were split on the death of their owner between all the surviving sons. The Reivers had a code of honour, nonetheless, and it was required that they help each other regain their own cattle or answer insult… and any man who refused to do so could be put to death, thus perpetuating the feuds and bloodshed.

Within the tiny entrance to the tower we found another map, this time showing where the Border clans were based, including my companion’s clan on the West March. It may well be that he was the first of his clan to actually get inside the Pele Tower. 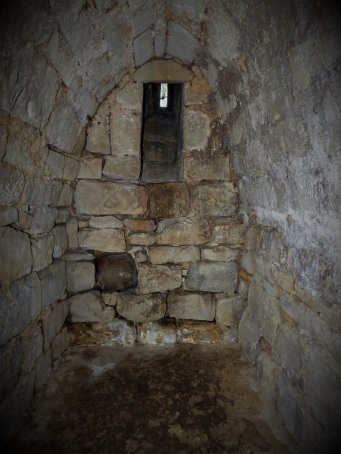 The ground floor was reserved for bringing the animals in to safety. But also housed a tiny guard room and a prison cell. We had not, at this point, found the light switch, and the atmosphere in both was that of a condemned cell. The darkness, alleviated only by the merest slit of a window, was oppressive, heavier than darkness should be. The guard room is only slightly larger than the prison cell, and the floor-space is little bigger than a coffin. It feels like one too, even when the lights are on.

We went up to the next floor, climbing a precarious wooden staircase, taking in the two tiny chambers, furnished as a sleeping chamber and living room, after the fashion of six hundred years ago. Above that are other rooms, marked with curious geometric symbols which have been highlighted in yellow and are probably masons’ marks.  Here too is the mechanism for the Victorian clock that was added to the tower, and above it on the roof is the eleven-hundred-pound bell which, when it struck five, was loud enough to wake the dead.

The tower is incomplete, being only half of the original building, but it gives a very complete picture of what life must have been like for those required to retreat within its walls. The conditions are incredibly cramped, daylight almost non-existent and the thickness of the walls effectively cuts off all sound from the outside world. It must, we agreed, have been hellish, but as nothing compared to the absolute hell suffered by those in similar towers when the attack came.

You can imagine the stone cracking as flames that could not breach the walls were kindled to smoke out those trapped inside. You could hear the panic of the animals on the ground floor, adding to the fear and chaos, the crying of children and the sound of battle from the roof. A safe haven? Perhaps… but it could also be a deathly trap.

More than either of the grand castles we had seen, both restored and ruined, this was the perfect illustration of the ego and we could see why Steve had wanted to make it part of the weekend. Our lives are varied… we have roles in many arenas… but at the core of the ego is a strongly fortified haven within which we can survive and into which we retreat when we feel threatened in any way. Like the tower, the very thickness of our own personal walls can protect us from harm, real or perceived, but like the tower, it can be a trap. Any refusal to come out into the world for fear of its dangers will lead to our becoming increasingly isolated from our fellow beings, and if we linger too long within those walls, cut off from the beyond, the light and life within us will surely perish. 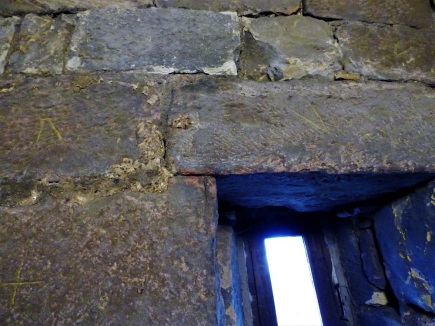 We looked out from the rooftop across the trees to the sea. There is a place in our lives for looking inwards, a time to withdraw and contemplate what is real, who we are and what truly matters to us. But freedom lies in stepping beyond the barriers we beset ourselves with and in embracing life in its entirety… even, and perhaps especially, when we fear it.

Far below us, we saw cars drawing up and the faces of our friends laughing up at us. Leaving reverie behind, we rejoined the human race. An evening would follow where the ‘walls’ stayed down and, fuelled by excellent food, a little wine and much talking, peals of laughter followed our visit to the the pele tower. We would share stories, discover coincidences, chat with a complete stranger about the magical community, find the fact that two of our number shared a birthday… and oddest of all, that the gentleman we had met in such strange circumstances in a Cornish fougou five hundred miles away, was a member of a group run by one of our companions for the weekend. Later, three of us holed up with a glass of mead and talked until we were falling asleep… None of which would have happened had we immured ourselves behind our inner walls…