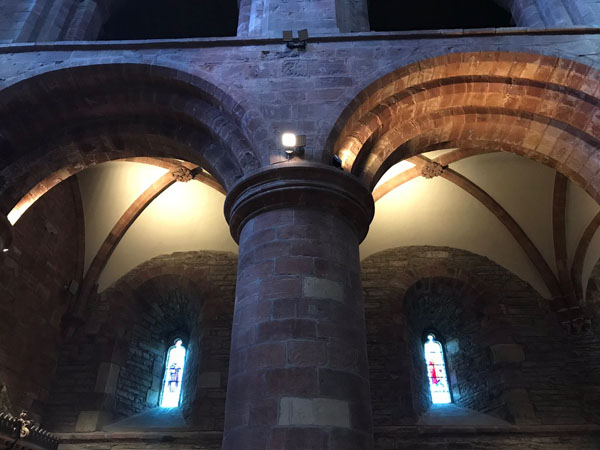 We could be in any of the great cathedral cities of Britain. If someone took off the blindfold and asked, we might say Salisbury, York, Lichfield or the wonders of Durham Cathedral. The latter is significant, because they who built Durham came here to add their skills…

We are in the capital of Orkney – Kirkwall (reference ‘F’ in the Northlink Ferry’s map, below), in one of the most splendid cathedrals I’ve every visited. And yet this town of Kirkwall, the commercial centre of the archipelago of Orkney, has a population of only 10,000 people. The rest of Orkney is compact, beautiful, and infused with a sense of ancient mystery. So why is this magnificent building here, so far from the rest of British ‘civilisation’? 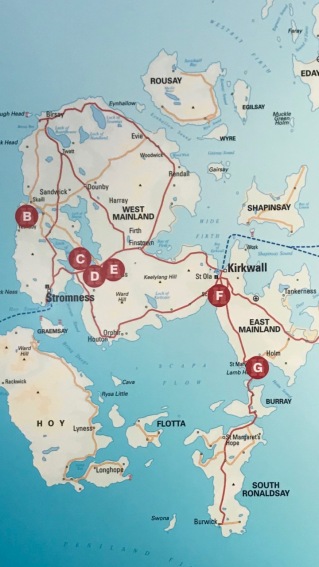 Aha! I thought to myself, upon hearing this – some medieval outpost of early Britain, strategically important – as it was to be, a thousand years later, during WW1, when the British fleet was based in Scapa Flow. But these were not English earls; they were Vikings, albeit Vikings who had adopted Christianity. 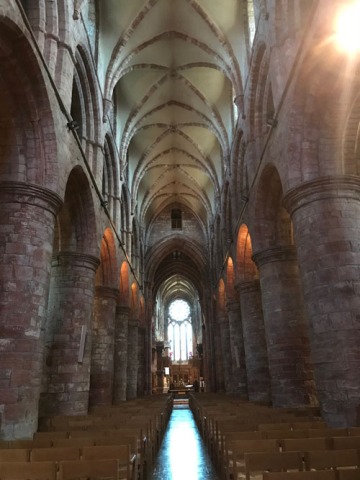 St Magnus Cathedral is referred to, historically, as The Light in the North. It’s not hard to see why when you stand in the west and look along the nave towards the chapel in the East. 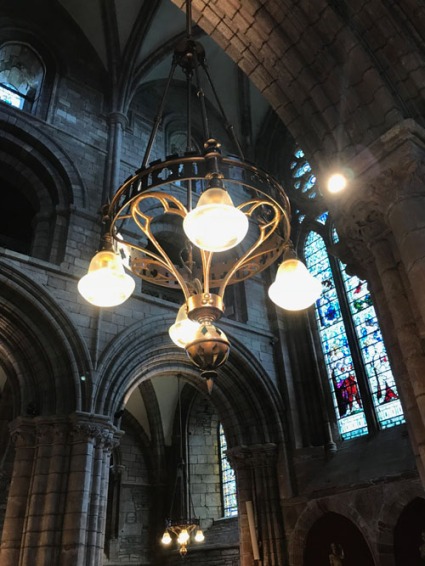 The Earls of Orkney were from Norway, and had settled in these fertile islands, as part of their vast and successful expansion. Modern Stavanger is a mere 300 miles to the East – no problem for a nation with the seafaring expertise of the Vikings. The Old Norse name was actually ‘Jarl’, rather than Earl; and the two terms only became synonymous during the 15th century when, under the Sinclair family, control passed to mainland Scotland. 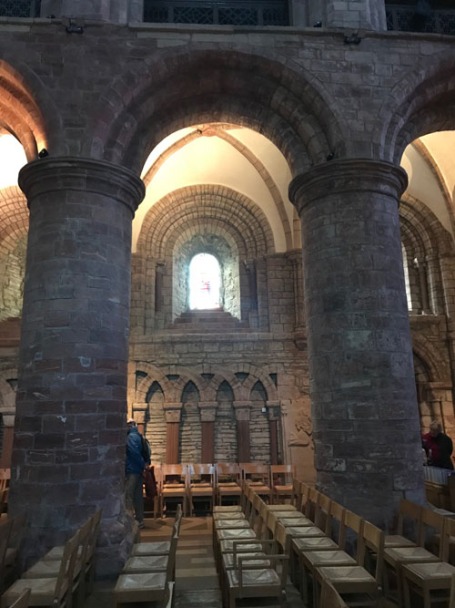 Until that time, the ‘Jarls’ of the combined territory of Orkney and Shetland (Norðreyjar) had a great deal of independence and local power. The office of Jarl of Orkney became the most senior rank in medieval Norway except for the king himself. 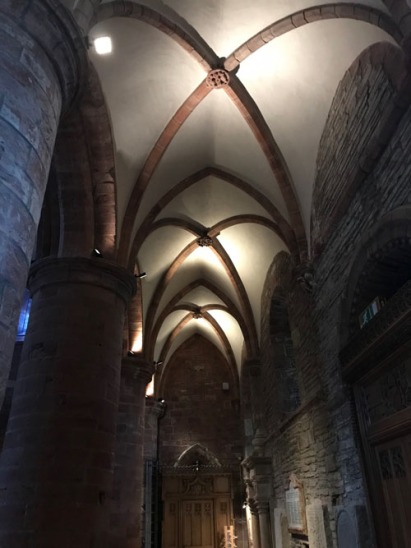 Magnus Erlendsson was the Earl of Orkney in the early 1100s. He seems to have been a very spiritual man, which many contempory Norwegians saw as a weakness. Magnus once refused to fight during a Viking raid on Anglesey, staying on his ship, praying and singing psalms.

He shared the Earldom with his ambitious cousin, Hakon. The two men fought a series of battles, damaging the land. To settle this, it was agreed to hold a council of peace on the Orkney island of Egilsay. Each Jarl would bring only two ships, containing unarmed men. Hakon broke the agreement and arrived with eight ships, each fully armed. On his orders, in an act of humiliating barbarity, Magnus was executed by Hakon’s reluctant cook, using an axe.

Magnus prayed as the axe was swung towards him… He was buried at Birsay, in the north-west of the Orkney Mainland (see map, above). Over time, stories of miracles associated with the royal grave began to circulate. During this time, Hakon’s reign seems to have been blighted by misfortune.

Eventually, Magnus’ nephew, Rognvald, came from Norway to claim his uncle’s Earldom. He promised the people of Orkney that he would build a ‘great stone minster’ in honour of his uncle; and that he would turn it into a place of pilgrimage. 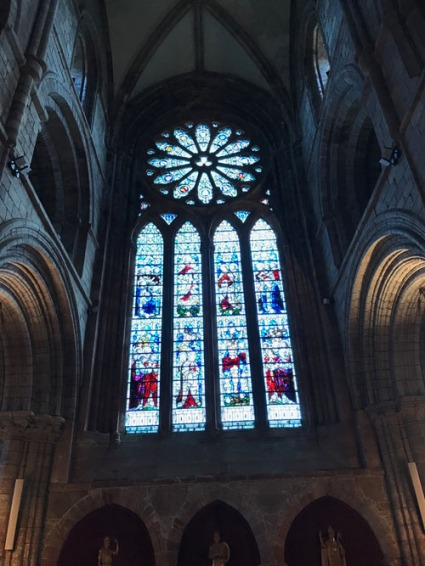 The Cathedral was founded in 1137 and inaugurated as part of the Archdiocese of Nidaros (now Trondheim) in Norway. Orkney became part of Scotland in 1468. A few years later, the cathedral was given to the people of Kirkwall by King James III.

After the Scottish Reformation in 1560, the cathedral was used for Protestant worship. Nowadays, it belongs to the people of Orkney. It is maintained by the Orkney Islands Council. It has a Church of Scotland congregation and can be used, by arrangement, by any Christian denomination. 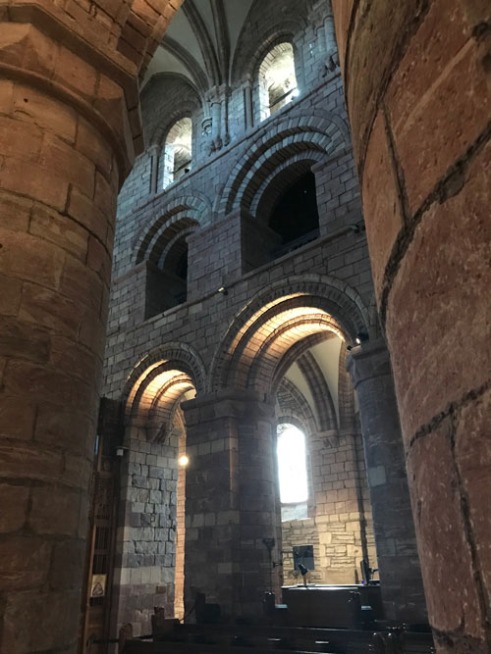 Restoration work took place in the 1850s and again, following a large bequest from Sheriff George Thoms, during 1913-1930. Because of its great age, the cathedral structure is constantly monitored for stability. 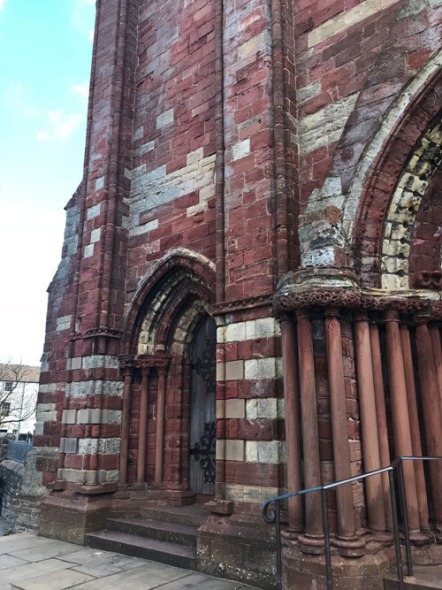 The exterior of the building shows off the local sandstone, from which most of the cathedral is constructed. 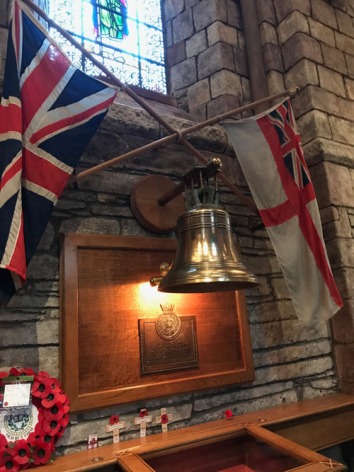 The north choir aisle is home to the brass bell from HMS Royal Oak, the battleship sunk in Scapa Flow in 1939. The case holds a Book of Remembrance to honour those who died. The pages are turned every week by the cathedral custodians. 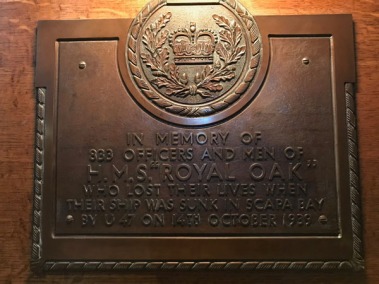 The chapel at the east end of the building is dedicated to St Rognvald, the founder. It was redesigned in 1965 by the Orcadian artist Stanley Cursiter. The wooden communion table and lecterns, incorporating medieval panels, were made by a local craftsman, Reynold Eunson. The left figure is Rognvald’s father, Kol Kalisson; the right is William the Old, Bishop of Orkney when the cathedral was built. 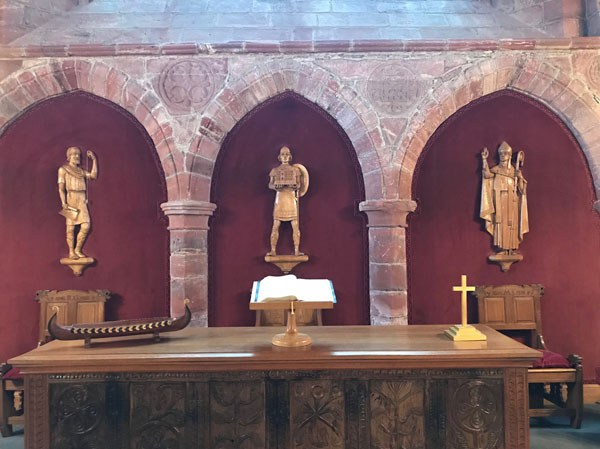 The central figure is that of St Rognvald, the founder of the cathedral. He is seen holding a model of the original cathedral building. 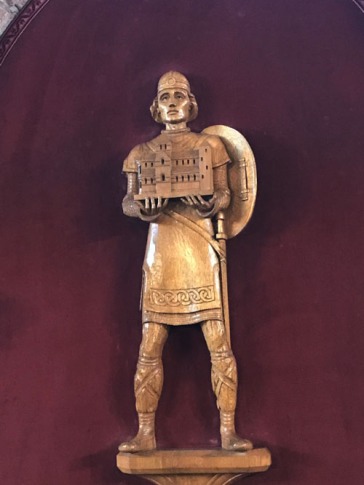 The right side of the chapel is home to Dr John Rae, a resident of Orkney, who worked for the Hudson Bay Company, which explored the Canadian Arctic. He discovered the vital Northwest Passage, enabling the shipping of goods between Europe and northern Canada by a much shorter route. His remains are buried in the cathedral’s graveyard. 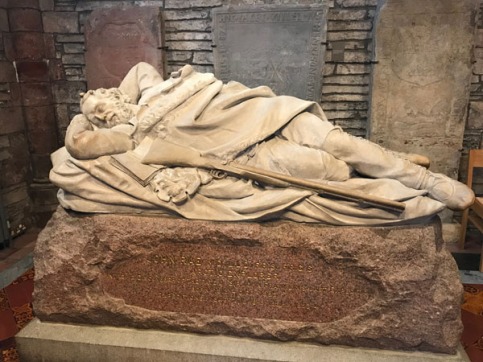 Sadly, the chapel area was being used for a lecture, which meant I could not get close to:

The majority of the present stained-glass windows were designed by the Glasgow artist Oscar Paterson. They depict a variety of saints and biblical figures, as well as characters from Orkney’s Norse past. 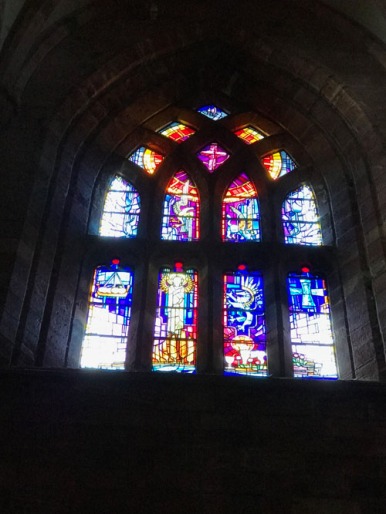 I have, therefore, many reasons to go back… something I look forward to very much.

Other parts of the Orkney series:

Stephen Tanham is a director of the Silent Eye School of Consciousness, a not-for-profit organisation that helps people find the reality and essence of their existence via home-based, practical courses which are low-cost and personally supervised.

His personal blog, Sun in Gemini, is at stevetanham.wordpress.com.