The dragonfly perched on the sun warmed granite of the bench… more than I am allowed to do, as it  still has to be drilled and fixed immovably in place. I was precariously perched on the edge of a flowerbed, camera in hand, watching my son hand-feed the huge sturgeon in his pond…not exactly comfortable, but perfectly placed to watch the fascinating creature that had come to visit.

My son’s garden is in the town and we live in an area with little natural water, so every dragonfly we see here is exciting. This year, with the pond’s new and more open aspect, we have seen more than usual, from the tiny, iridescent demoiselles with their velvet-dark wings, to the big hawkers, but this was the first darter we had seen here. With its stained glass wings and deep red body, it was a beautiful visitor and one that showed no inclination to leave.

There are over fifty different types of dragonfly and damselfly in Britain, some of which are now on the red list as endangered species. Like many other insects, they are suffering from changes in land use and management as well as the problems cause by pesticides. It would be a tragedy to lose any one of these gorgeous creatures, each of which play their part in our lives as part of the balancing act of Nature.

They have been around an awfully long time. Their ancestors, the griffinflies with wingspans of up to thirty inches, ruled the insect kingdom around three hundred million years… long before the advent of the dinosaurs, when humankind was no more than a whisper in Nature’s dreams. Today’s dragonflies have changed little since then, so in many ways, they are a glimpse of Earth’s distant past.

In England, they were once known as the Devil’s darning needles, and it was thought that if you fell asleep by a summer stream, they would sew your eyelids shut.  This old legend, at least as it now stands, sounds like the kind of tale you would tell to youngsters to stop them lazing in the sun instead of working, and yet, to the Zuni, dragonflies were messengers between man and the gods. Perhaps, as eyes closed in dreaming can also see across the boundaries of reality, the two stories are not as far apart as they might at first seem.

I watched the brilliant little creature exploring the garden… a whole new and undiscovered country  for a being so recently emerged from the world in which it grew. Dragonflies hatch in water and spend most of their lives there as larvae, only emerging at the end of their lives as the glorious winged beings that delight our eyes. They can live years as larvae, just feeding and growing, before their transformation, but most live only weeks as dragonflies.

I think this little dragonfly was but newly emerged as he seemed content to be still and gather strength from the light. I couldn’t help thinking how beautifully Nature illustrates our own journey when we see the similarities, rather than the differences, between the lives around us and our own.

Most of us spend the early parts of our lives ‘underwater’. For many of us youth can feel cold and dark, a time of insecurity and fear that only takes on an alluring sheen when seen through nostalgic eyes. The earlier parts of our lives are about learning to survive, both physically and in society. 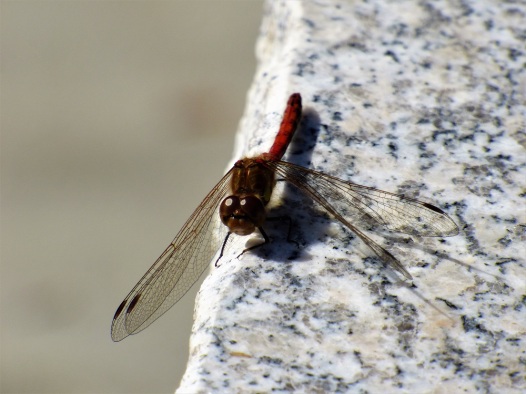 Many feel themselves lost, tangled in the choking weeds of suppression, victims of circumstance or the control of others. It is only with age that many of us begin to emerge as our true selves and it can be a struggle to break free of the shell that life and conditioning has built around us.

We may then cast around, looking for a place our new self can feel at home, seeking a new path or direction to replace old habits and outworn patterns… until we realise that all we need to do is to be still and gather strength from the Light. When our wings have dried and our true colours glow, then, perhaps, we can be our true selves… and the latter part of our lives may teach us how to soar. 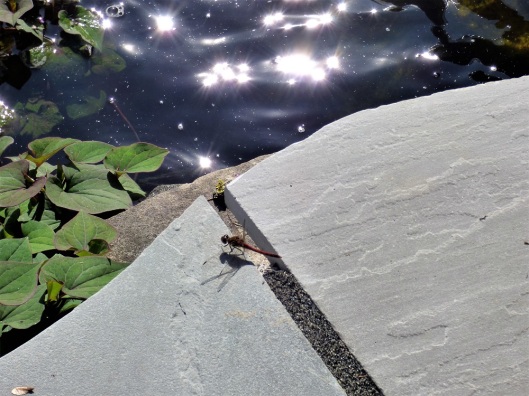