I recently attended a workshop with The Silent Eye about Facing Our Fears, an extraordinary weekend spent among the hills and grey stone villages of the Peak District. It’s taken me a little while, as it usually does, to process everything that happened. Once again there was history and mystery, good company and tasty food, old friends greeted and new friends made. And, as always, revelations.This is part seven of my account, parts one, two, three, four, five and six can be found here…

As we approached the Andle Stone its size, half hidden by the slope and vegetation, became more apparent, as did the fact that this was obviously a significant part of a larger landscape. Once again, there seemed to be a tradition of climbing attached to the stone, as someone had incised footholds as well as graffiti, and cup marks higher up indicated it had been in use for a very long time. However, it was a good four metres or so to the top so we decided to leave it, pushing through the shrubbery to the front of the stone, where an inscription lay hidden.

We had left two of our companions to return to the hotel, as one of them, gallantly sharing the weekend in spite of upcoming surgery, had turned her ankle and needed to rest. We were, therefore, a reduced company who crossed the road to make our way across the field to another of those natural, wind-worn sentinel pillars. The Andle Stone does not just look back, though, towards Stanton Moor…it guards the passage to a secluded site we would shortly be visiting.

At first glance, it seems just a huge boulder, over sixteen feet high and surrounded by a small, green copse. Nineteenth-century climbers had once again carved hand and foot holds into the face of the rock…a bit of history I would rather not see. But there are older carvings too, as the stone reportedly has cup marks carved into its upper face, far older than the names of intrepid graffiti artists from the past two hundred years.

There is also another legend carved on the stone, and it is one that is easily missed. As our theme for the weekend was fear and how we can not only choose to face it but turn what is usually seen as a negative emotion to the service of a greater cause, it seemed uncannily appropriate.

Carved on the back of the boulder and almost hidden from sight is an inscription, commemorating Lieutenant Colonel William Thornhill of the 7th Hussars, a veteran of Waterloo, and Arthur Wellesley, better known as the Duke of Wellington, who commanded the decisive battle against Napoleon. We had not realised, when we planned the weekend, that Wellington had died a hundred and sixty-seven years ago on the same date that we would be visiting the Andle Stone, a date which is also, coincidentally, my birthday.

Thornhill’s regiment, the 7th Hussars, had seen some of the worst of a battle that left the army in tatters. Of the three hundred and eighty men who took up their position near Hougoumont, less than a third would end the day alive and without serious injury. 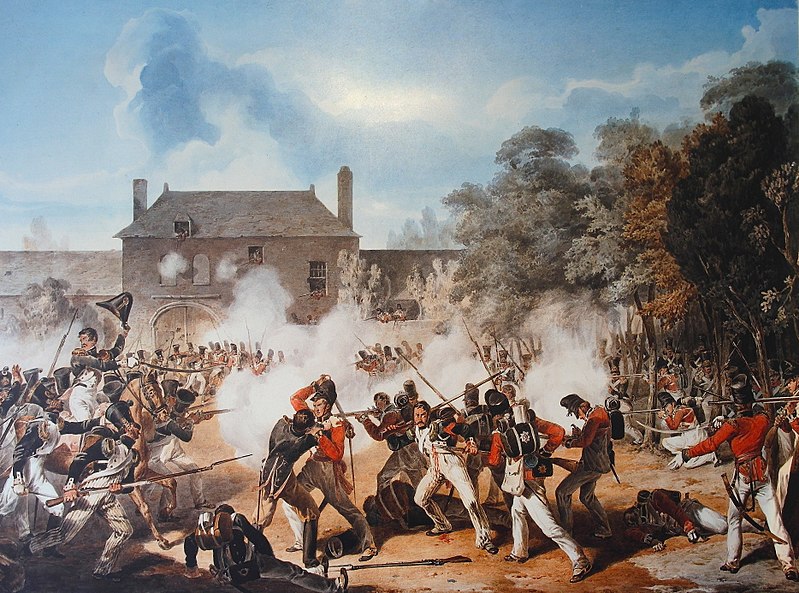 We paused to consider for a moment, what they might have felt as they waited for the battle to begin…and when it had begun. How can we imagine the filth, noise, stench and horror of such a battlefield, where men were hacking each other to pieces with sabres, shelling each other with cannon and musket, and fearing the erratic flight of the new rockets designed to rip the squares to shreds?

It must be remembered, that, in spite of guns and cannon, much of the fighting was hand to hand.  You saw the eyes of the men you killed or maimed… or those who would do the same to you. The acrid odour of gunpowder, burnt flesh and spilled blood… the all-pervasive mud made slick with blood… the screams of horses and the whimpering of the dying… There was no pressing of buttons, no ‘surgical strike’…  battle was personal and there was nowhere to hide from horror.

It was the bloodiest of campaigns, with almost a quarter of the French and Allied armies being killed or wounded. Wellington, a hard leader, known to have called his ‘infamous army’ the ‘scum of the earth’, wrote of the battle, “ My heart is broken by the terrible loss I have sustained in my old friends and companions and my poor soldiers. Believe me, nothing except a battle lost can be half so melancholy as a battle won.”

Regardless of our personal stance on the evils, rightness or necessity of war, we can empathise with the men who stood and waited for what might come. However brave their faces, whether they waited with forced laughter, thought longingly of home, loved ones or safety, or whether they held back tears, wondering why the hell they had ever taken the King’s shilling, none of them can have been unafraid. And yet, they stood.

Many tales of heroism reach us from humankind’s battlefields, tales of self-sacrifice that surpass the call of duty or personal fear, of small kindnesses and of the breaking of barriers. It is often only when we are in the grip of fear, carried along by events over which we can have no control, that we learn what we are capable of, both as individuals and as a species.

Even the smallest light shines bright against the darkness. There are so many stories of bravery, selflessness and humanity to emerge from these bloody chapters of human history. We tend to think of those who shine in such circumstances as fearless, yet, there can be no courage where there is no fear… the hero is the one who refuses to be ruled by fear and chooses, instead, to act.

We sat with the stone for a while, listening to a reading and watching as a fearless young father scaled the rock in seconds, standing proudly upon his perch and surveying the land. As we stood to leave, heading towards our final official site of the day, we heard his voice on the wind, unconsciously illustrating the heart of Wellington’s words…