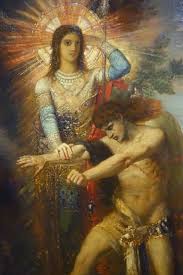 There are other sections in the Book of Genesis

which may be pertinent to our survey of St Michael…

… ‘Left alone at night, Jacob was attacked by an unseen presence

which wrestled with him until day-break, whereupon his adversary cried,

“Desist, for the dawn is here!”

“Are you then a bandit, that you fear the dawn?” asked Jacob.

“At this time, we angels must sing dawn’s praises!”

“I will not desist until you bless me,” said Jacob.

“What is your name?” asked the angel and when Jacob answered, he continued,

“From this time on you shall be called Israel, for you have struggled

against me without succumbing and fire should guard fire.”‘

Candidates for Jacob’s adversary include Michael, Gabriel and Samael,

Traditionally, Michael is associated with fire, but it is not

altogether clear why, unless he was originally conceived as

one of the ‘Cherubim with whirling limbs of flame’ which guards Eden?

It is difficult to shake the notion that this phrase

is a ‘poetic-kenning’ for the sun.

Eden, in this mythology, is envisioned as a heavenly realm

filled with brightly jewelled trees which could easily be

indicative of a ‘solar interior’?

In magical tradition, Michael is Regent of the South Quarter

in some temples and when there he represents the Cardinal Point of fire,

which is, in all probability, another veiled reference to the sun.

If Samael can be equated with Lucifer, head of the Seraphim,

he too would qualify, albeit his fire

consists in white flames not yellow, orange, or red,

which points to astral rather than solar origins,

‘the star behind the sun?’

Precise angelic attributions are a source of continual contention,

and the ninefold ‘Hierarchy of Angels’ provided by

does little, if anything, to alleviate such debates.

‘the gods strive against those who oppose you.’

7 thoughts on “An Unseen Presence…”