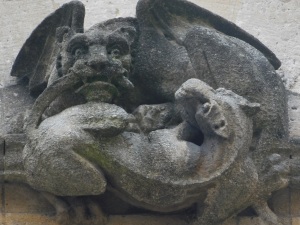 ‘ … And look! A man clothed in linen, whose loins were girded with fine gold… His body also was like beryl and his face had the appearance of lightning. His eyes were as lamps of fire, and his arms and his feet like in colour to burnished brass. The voice of his words was as the voice of a multitude… and he said, “… To you am I now sent. Fear not, Daniel, for from the first day that you set your heart to understand, your prayers were heard and I am come for your prayers… I am come to make you understand what will befall your people in the latter days. I will show you the literal truth of these things. There is no other that can do this.”‘

It is very difficult to find any illustrations for this piece.

Perhaps that is linked to the Hebraic injunction against graven images.

In the current climate of image saturation it might be worthwhile

considering the possible reasons for such an injunction…

Speaking of his encounter with the ‘man clothed in linen’ Daniel says, “I alone saw the vision and the men that were with me saw it not but a great quaking fell upon them, so that they fled and hid themselves… I was left alone and threw myself to the ground. When he spoke I stood, trembling, and when he had finished speaking I was strengthened.”

Elsewhere in the text Daniel is less sure of this being’s precise nature:

“… And look! One like the similitude of the sons of men touched my lips. I opened my mouth and spoke… Then there came again, and touched me, one like the appearance of a man…”

Michael is described both as a ‘Chief Prince’, and as ‘Daniel’s Prince’ by the narrator.

And later, as a ‘Great Prince’… “How long until the end of these awful things?”

Then I heard the man dressed in linen, who was above the water of the river, swear by the Ever-Living One as he lifted his right hand and his left hand to heaven, “For a time, times, and half a time and when the breaking of the power of the holy people comes to an end, then shall all these things be fulfilled.”

Already, after this brief overview we can glimpse some of Michael’s traditional attributions.

He is concerned with ‘end times’.

He strengthens and protects the individual

and can be petitioned on behalf of nations or ‘a people’.

He acts as a bridge and can communicate, high to low, and low to high.