… So, we return to the quest and turn shining eyes to the south.

Not that we ever left it, yet the churches had definitely ‘fallen off-line’…

Until one particular stained-glass window in Skipton.

It is tempting to think that later traditions lose much that is essential to preceding ones.

In magical traditions derived from the Hebrews, the Archangel Mikael is a guardian of the south quarter and if a ‘Michael Window’ is present in a church, it is a relatively safe bet that it will be found on a south wall of that church.

So, why were we charging around St Michael’s, Hathersage, looking at stained-glass windows on the north wall, with such singular precision?

Because we were desirous of another window.

This headlong, wilful charge, bugles blaring, could well have been our undoing, had we been alone.

There was no ‘Michael Window’ in St Michael’s, Hathersage.

But there was this… 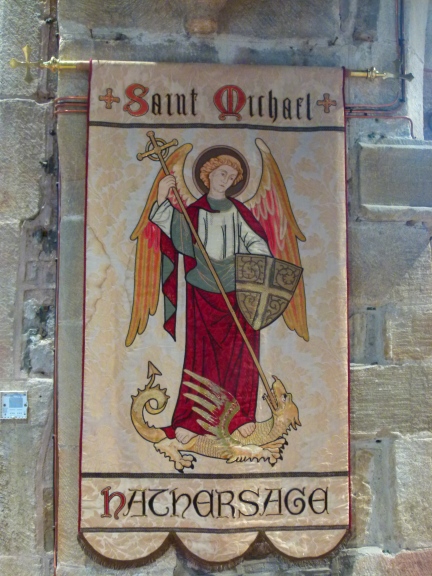 So, what to say about this banner?

It is a work of art, certainly.

It is a work of art that transcends the medieval style of its composition, although, the ‘S’ as an ‘eight’ and the ‘M’ as an ‘omega’ are both remarkable.

The ‘lance’ too, as ‘Celtic crozier’, is a sublime touch.

Was the dragon always golden?

Does this hue, denote the beginning or even the end of a process?

Was the beast once much bigger?

Is this really how one earns one’s ‘spiritual wings’?

The spirals on the Saint’s shield are, to say the least, suggestive…

“What if the Dragon is time?” Says Wen…

The Keys to Heaven

Psychologist, Maurice Nicoll studied under Fourth Way exponents G.I Gurdjieff and  P.D. Ouspensky, and presented his own philosophy in a series of works published during the Mid Twentieth Century.

In his seminal work, Living Time… he makes no bones about insisting that the psychological states and concepts that he is expounding, and their utilisation, are ancient and stretch back through Christianity, Judaism, the Greek Philosophers and on into the mysterious climes of Pre-Dynastic Egypt…

In re-presenting these ideas as a series of poetic explorations, author and essayist, Stuart France uncovers a series of links with the Mediaeval Traditions of the Northmen, and the Matter of Britain!

What is the original story of our week? How does the moon harrow hell? Prepare to be enthralled, entertained, educated, and enlightened, as new light is shed on the enigmatic figures of Wotan, Merlin, and King Arthur.

They do not write books like this anymore, if indeed they ever did!

3 thoughts on “Blinded by the Light…”