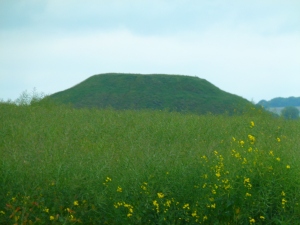 ‘…One of the stops we did manage to make on the way to our second ‘official sojourn’ in Glastonbury was, Merlin’s Mound.

Now, Merlin’s Mound you might have thought would be a well-known tourist attraction boasting hundreds of thousands of visitors a year just like its Big-Sister Mound of Sil-Bury Hill, so called because late legend has a king called Sil buried there along with his treasure, a golden horse.

Quite why this is not the case it is difficult to fathom although one possible reason is that Merlin’s Mound is hidden within the grounds of Marlborough College which is a private school.

Of course, there is nothing actually buried in Silbury Hill because it isn’t a burial mound at all and the Golden Horse is far more likely to refer to the sun which, knowing the folk responsible for its construction, probably set behind the hill when viewed from one of the other sites in the area, or seemingly rose from it, and I did not learn that at any school, private or otherwise…

“Which would make it Sol-Bury Hill, anyway,” says Wen.

In fact for a long time I was fairly sure that although Silbury Hill was regarded as Merlin’s Bigger Sister, size wise, there was not an awful lot in it.

“Much bigger, Merlin’s Mound only looks comparable because it dwarfs the buildings that currently hide it so effectively.”

“What does Silbury Hill have to give it scale?”

“No, there’s not a lot else in the vicinity is there.”

“This is one reason why accurate measurement is so important.”

But anyway, and more importantly than accurate measurement of any kind, work is currently ongoing in the renovation of Merlin’s Mound and we are able to walk two-thirds the way around its newly refurbished spiral path-way and I have to say although it was something of a disappointment not to be able to get all the way to top in other ways it was not such a bad thing after all for just getting two thirds the way up was giving me a rather ‘heady’ feeling.

“I know,” says Wen. “Me too. What’s the line in, ‘A House on the River’ when Aeth’s troop, in all their glory, is approaching the strong-hold of Aillil Silver-Tongue and Sweet-Mouthed Maeve?”

“My head may as well be a vat full of wine,” laughs Wen, and I laugh too.

Although, to be strictly accurate in our comparison, the experience is far, far better than drinking or indeed, being wine…