A drawing by Julien Champagne.

Why would the Mediaeval Stonemasons sculpt figures

on the top of their buildings which no one can see from the ground?

Like some church towers, it was possible to scale

the towers of Notre Dame, Paris, and acquire a closer view

of the sculpted forms which inhabited its roofscape.

Should this endeavour be approached in a symbolic frame of mind,

it might be useful to regard the spiral staircase which led there,

as a series of right-angles arranged around a lineal ascent,

and to take note of how many steps were required to reach the top.

Any work of alchemy

unfolds in a series of steps,

as achievements or ‘crowns’ upon the Royal Way.

And when one reached the top?

Of the figures on the square-sided towers

only one was nominally human.

There is no doubt, therefore, that we would

be meant to identify with him…

is a masterful representation.

Our ‘inner’ alchemist for such as he been designated,

primarily because of his Phrygian Hat, or ‘liberty cap’,

his liberia, was nevertheless a curious figure.

Did he stroke, tug at, or pull his beard?

All three of these actions have different connotations.

Did he strain forward to see, or call out to, or even warn,

someone below, who was ascending to reach his position?

From a different perspective his mouth can be seen to gape wide.

Was that person, if person there was, ascending to save or release him?

Or merely to question him about the strange company he kept? 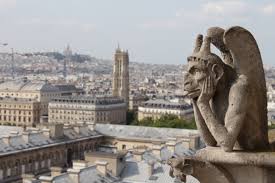 All the other figures that peered from the parapets

of the towers alongside the Alchemist were what might be termed

grotesques, they were certainly not gargoyles,

for gargoyles are water-channels of which these figures have none.

Most of them also appeared

to be displaying a predatory or demonic nature.

Ever vigilant over the movements of humanity,

in the busy metropolis beneath them, some of them fed…

2 thoughts on “The Alchemist…”