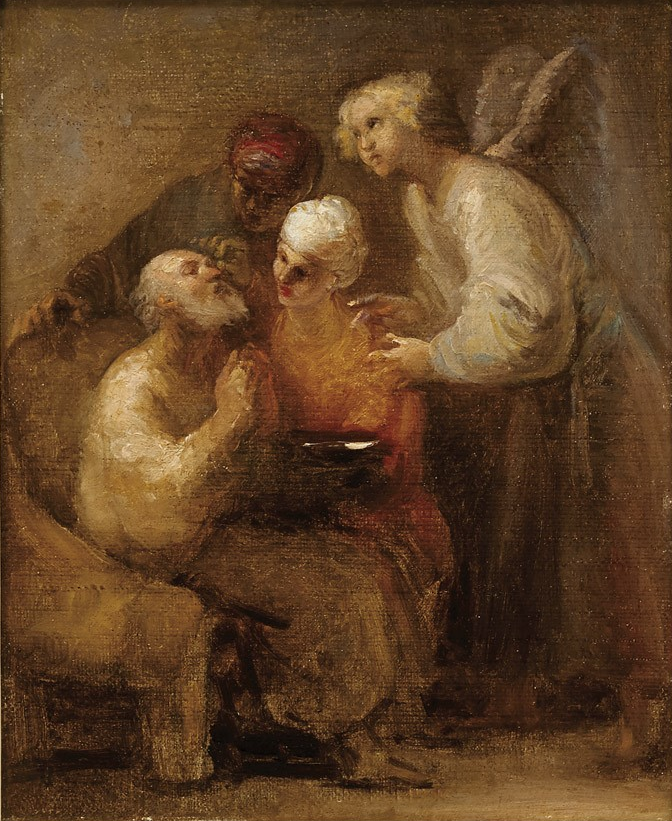 Domingos Sequeira – Tobias heals the blindness of his father

…  If Tobias walks a recognised Pilgrimage route when carrying out his Father’s instructions it would certainly go some way to explaining the presence of the two other Archangels in some of the paintings even though there is no mention of them in the story.

Tobias’ destination is just given as a ‘far distant land’ in the version we have but it,

maybe, cannot be too far distant if Tobit is related to the family Tobias stays with, which he is.

Michael could at a push be described as Androgenous,

Raphael and Gabriel are definitely Gyandros.

The fish by this stage is purely symbolic…

But what of Michael’s golden apple?

An allusion to the Garden of the Hesperides, guarded by the many-headed dragon.

Ninevah and ‘large fish’ appear to be related and that is what originally excited us.

We were following the Johannine link, Jonah swallowed by the ‘Whale of God’ et al.

‘Make straight the way of the Lord!’

The dog in some of the depictions seems almost transparent.

Whatever, we shall call him Toby for he has to do with threes,

and is the right provenance and time,

and tradition for the link with the theatrical puppet-play to be sustained.

We were quite right about the word play on that one, all those years ago.

It may even be that our Guardian Angel is three-fold.

Threes, in this tale certainly play their part.

Not least in the age of Tobit when he dies,

but I am not altogether sure whether a fish actually posseses

the attributed organs, which in itself maybe suggestive,

Whether or not ‘Toby’ gets the liver, he always gets the sausages…

2 thoughts on “Tobias and the Angel: A dog called Toby…”