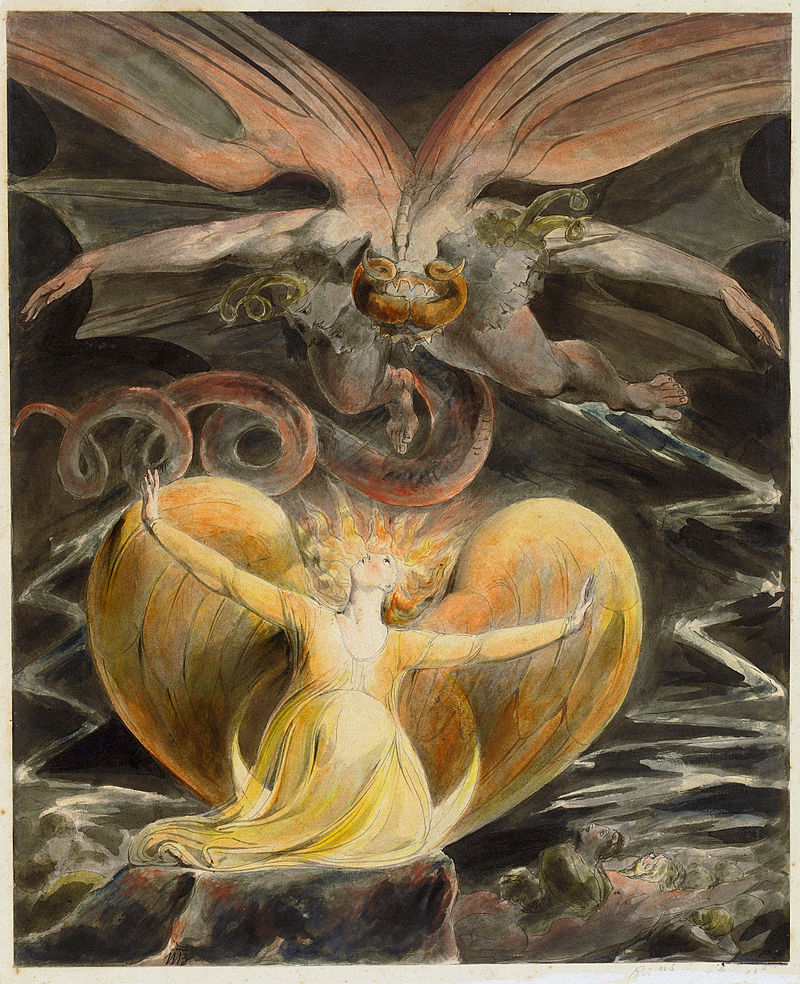 Blake’s take on the Seven-Headed Dragon of Revelation is suitably anthropomorphic!

We are continuing our ‘trawl’ through chapter twelve of Revelation, which commenced here.

… ‘And the dragon stood before the woman which was ready to be delivered,

for to devour her child as soon as it was born…’

Time ‘devours’ everything that is born into the world, but wait, ‘…And

she brought forth a man-child, who was to rule all nations with a rod of iron:

and her child was caught up into God, and to his throne…’

I think the ‘man-child’ here represents an Aeon…

Such a designation would cover both ‘Horus’, and ‘Christ’,

at any rate he his saved from his earthly sojourn and

caught up into a heavenly throne, just like the star Spica,

which nestles in the ‘Throne of Virgo’!

Although, ‘ruling all nations with a rod of iron’ may well be something

of an ‘elephant in the room’?

the ritual of exorcising demons.

Thrones are always regarded as feminine,

especially when a masculine divinity happens to be sitting upon them.

‘…And the woman fled into the wilderness, where she has a place

prepared of God, that they should feed her there

‘God’ appears to be plural here in which case ‘they’ would be the ‘Elohim’.

These are the seven planetary beings, but presumably, from the heavenly

perspective rather than the earthly which in this mythology appears to be demonic.

The woman in her escape to the wilderness is reminiscent of both Lilith,

Adam’s first wife who consorts with demons in the desert,

and Sophia, the Gnostic Principle-of-Wisdom, forever

harried by demons throughout her sojourn in an ignorant world.

The earthly realm is populated with ‘devils’, it seems,

long before ‘that old serpent’ gets there!