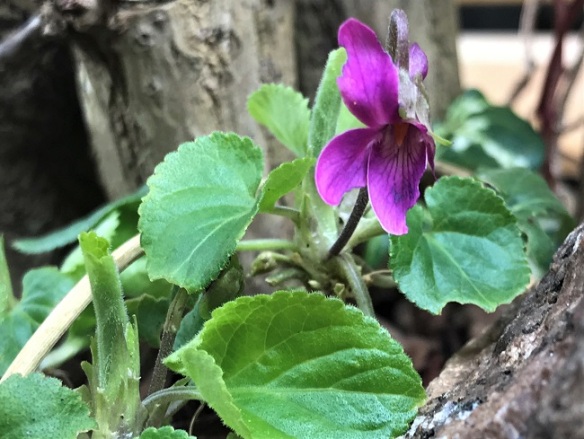 “It’s a wild violet. A bit scruffy… it has lost a petal… but still…” The tiny purple flower peeked out from between the stones we had piled up at the base of the weigela to cocoon the roots that had sprouted from its stem in the old raised bed.
“Where did it come from?”
“It self-seeded…”
“That’s amazing…”

My son, with his nascent interest in gardening, has a lot to learn and is learning fast. Every day, the garden offers new miracles, details that would pass unseen as part of the bigger picture of spring to anyone not inspecting each plant minutely and daily. Growth points and leaf buds are being monitored, unexpected colours are appearing and the mysteries of Nature are revealing themselves to eyes full of wonder. 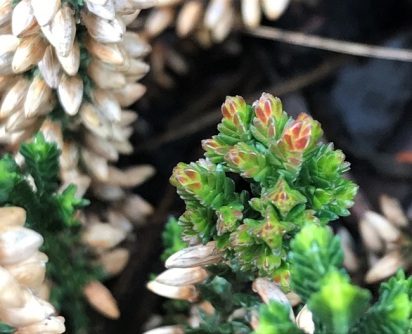 Tiny,  scale-like leaves top each little branch of the heather, crowning last year’s faded flowers with pink and vibrant green. A clematis catches hold of the branches of the climbing rose, wrapping its fragile stems around the green wood, pulling itself higher every day. Spires of tulips, their outer leaves wrapped tightly around the inner to protect the half-formed bud, begin to unfurl as the flower grows towards the sun.

Bud casings swell and slowly burst open as the baby leaves they contain seek their freedom. Folded, pleated…Nature’s origami… finding their way into the light. 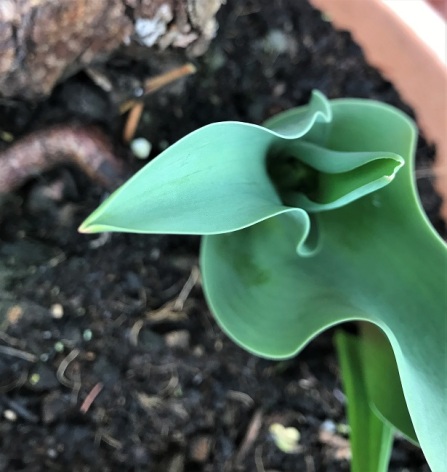 But it is the roses that really fascinate my son. He planted a host of bare-rooted specimens in the autumn… lifeless, dead-seeming wood that is now coming to life. He watches the growth buds turn from brown to pink, green and red before the new growth emerges… leaves and stems that are not merely green, but deep red, hot pink and lime.

He already had some mature roses too, that I pruned severely either when they were moved or disturbed last autumn. My son was concerned that they would look bare… even though I had shown him that I cut the branches above an almost invisible growth point. He has been amazed at how the sparse branches are filling out, completely covered with new shoots. 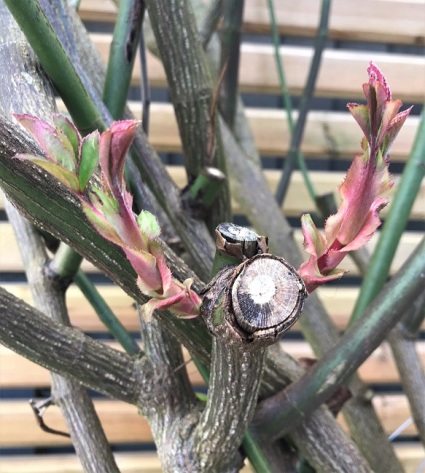 I am taking great delight in his wonder, as it is reminding me to see and appreciate the miracles happening just outside the door, instead of just knowing that they are there. And, as we tour the garden every day, we are seeing life in action.

Every growing thing is a channel for an invisible but determined life-force.  Watching the garden grow, it seems that how much of that force can be channelled is determined by the natural form of the plant. A rose, for example, that is pruned, thus diminishing its natural form, will put out many new shoots to replace the one that is cut as if to compensate and provide a vessel for the unstoppable influx of life.

One of the old roses did not survive being transplanted. Even its skeletal remains, as the dead wood  begins to decay, is a vessel for life. Insects, fungi and algae have moved in to colonise the vacated form. Life, observed my son,  always seems to find a way. When you consider the innumerable life-forms on the planet and the almost infinite number of ways they can reproduce and replicate themselves, there is no arguing that statement. 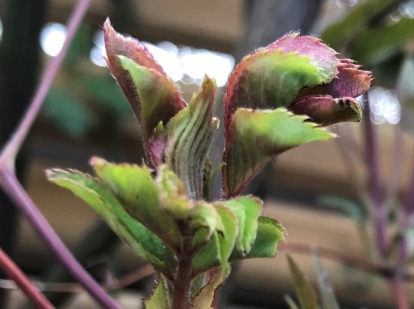 It begs the question, though… is life-force itself an infinite or a finite thing? If infinite, where does it come from? Is it in a constant state of cosmic recycling or is it being continually replenished as it is spent? If finite, is every life on the planet simply part of the planetary being? An exuberant expression of earth’s inner life? Either way, the artistry that creates the incalculable diversity of forms can only be a source of amazement.

I thought about how much money local authorities spend on municipal parks and flower beds… planting trees, covering roundabouts in floral designs and generally creating green spaces. With budgets so tight that essential services often suffer, you might think that landscaping might come low down the list of priorities, and yet we continue to make space for nature within our urban developments. Perhaps it is a very deep-seated need that is being acknowledged by the town planners.

Watching the tender, fragile leaflets and stems burgeoning in a suburban garden has opened a doorway to a vast realm of wonder. The sense of connection, of being part of a single stream of life, is acute and beautiful. The sense of kinship with every other living thing in existence, on this world and beyond, becomes unshakeable. And the knowledge that, with or without us, life will find a way is rather comforting. Watching the garden grow brings home the human part in a vast dance of life, where we are but one of myriad dancers. And that we have the capacity to be conscious of that can only be seen as a gift. 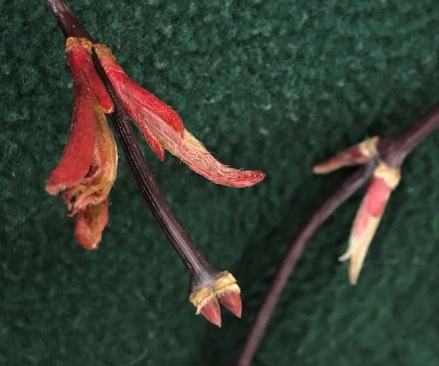