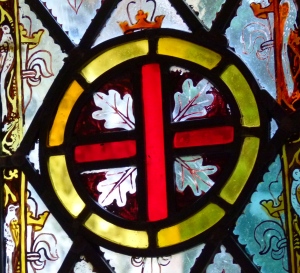 …Wen and I are discussing plans for the morrow over supper.

I for my part am keen to spend as much time in Our Blue Chapel as humanly possible and to that end have come up with a task that can be performed there. We were supposed to have a system of Oracle Cards in place for the launch but since we will not actually be utilising them in the lessons until the second year, work on them has been temporarily put to one side. However, since the weekend’s events I have been itching to try out the new energies for divination and since the year one glyph gives scope for the utilisation of twenty-two personality types all told it makes sense to try to map them onto the Major Arcana of the Tarot…

We take another tour, slowly examining the new discoveries and soaking up the atmosphere of the place as we go… noticing yet more depth to the wall paintings, including a depiction of Catherine’s beheading and a couple of stray heads… which do not seem to belong to any personage in particular. Whatever the deeper meaning of the ‘head theme’, it does not seem to have fazed the local populace, they almost seem to be celebrating its existence… It is with some reluctance that we finally set too on our respective missions…

I had not really thought too much about mine beyond the actual idea itself and it suddenly strikes me that this could be a mammoth task and worse, that the two systems might not map onto each other at all…

Undaunted, I start at one of nine… Ego-Resentment or ‘The Queen in winter’ whose negative aspect is… The High Priestess and whose positive aspect is… Strength.

For a reading the above eighteen cards should be shuffled and the top four then placed as a cross around a circle starting at North for the Ascendant, East for the Upper Mid Heaven, South for the Descendant and West for the Lower Mid Heaven.

The indicator cards below should then be shuffled with one of them being placed in the middle of the circle.

“I know. It proved to be ridiculously easy.”

I hand Wen the eighteen personality cards to shuffle.

…And start to lay out the cards:

Descendant: Positive Ego-Cowardice or, ‘The Sun’.

Wen places a card in the centre of the cross:

Indicator: Matter of the Heart or, ‘The Empress’.

Reading: The Chapel in the Vale of the Sun emotionally heals personality types four, five, and six.

4 thoughts on “Our Blue Chapel…”