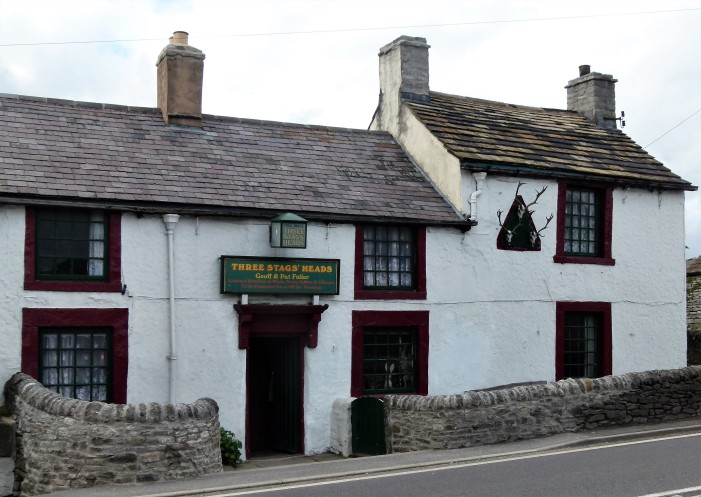 Just over the road from the entrance to Cressbrook Dale is a pub. It is a most unusual pub and we could not pass up the opportunity to take our companions there to end the weekend.

The Three Stags Heads is a seventeenth century longhouse, that seems barely changed since it was first built. From outside, you could drive past and never realise it was there, unless you noticed the sign, three stag skull mounted on the wall. We had driven past for years, until an American friend who knew the area took us there. The door was shut, the place seemed closed… it needed a certain amount of courage to lift the latch and enter what appeared to be someone’s home. We did not expect what we found…

The Three Stags Heads in Wardlow Mires is owned by Geoff Fuller and his wife, Pat. They are artists and Geoff’s beautiful and usable pottery filled the bar, with regulars drinking from his handmade flagons.  The main bar was a tiny room with a couple of rickety tables, a number of benches and three-legged stools and a vast old cast-iron fireplace. There were lurchers on the tables, dogs on the stone-flagged floor, and a mummified cat in a case in the corner… found in the chimney where it had  been placed to ward off evil. 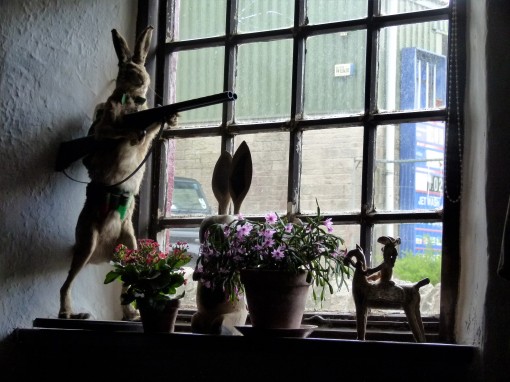 The menu was simple, and seemed to vary depending upon what came in, wrapped in sackcloth. The beer was mostly bottled and the Black Lurcher, the house beer, quite lethal. Mobile phones and modern gadgetry were not allowed. It was a place where time held no meaning and it was easy to step beyond it. Folk musicians were gathering for the regular impromptu session in the other, slightly bigger room…and we felt as if we had stepped into Geoff’s kitchen… or the inn from the Saragossa Manuscript.

Geoff seemed to take a bit of a shine to me and spent most of the time we were there showing me his collection of animal skulls and fossils. The young barman looked on, obviously taking note of the new customers, for when we went back a couple of years later, he greeted us in a way we would come to know and had remembered what we had ordered.

Sadly, Geoff’s health has taken a turn for the worse and old friends have stepped in to run the place and preserve this unique window onto another and timeless world. The changes being made are minor and practical, designed only to help draw customers to keep the old place going and we were glad to take our small party in and share one of our favourite pubs with them.

We settled down one of the small tables and I found myself, oddly, sitting in Geoff’s usual chair, with my carved-headed staff propped up on the wall beside me. The young barman, seated with his friends, noticed the staff and came over to have a look. 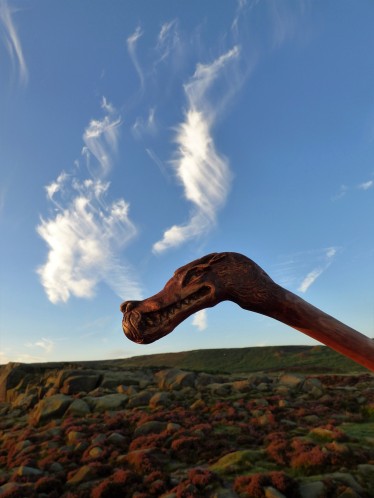 “You could have ruled a tribe with that three thousand years ago,” said he. “Or started one…” It was an odd thing to say, given how far back in time we had drifted over the weekend… but then, the Three Stags is that kind of place.

There is a magic in ordinary things… and ordinary places… that is often overlooked in the quest for the wand-waving enchantments made popular by Hollywood. You notice it sometimes, when things don’t quite ‘fit’ the usual framework of ideas… whether it is in a hare bounding across the landscape of a handmade plate or stepping into a room that remembers its history as a living and continuing tradition.

Real magic, though, for want of a better word, begins within and the true work of the seeker, be they beginner or adept, centres on the inner world of the higher self and its place within the pattern of existence. The weekend workshops we organise are designed to lead our companions to a door to those inner worlds, but, like the Three Stags, stepping through that door is a choice…and you never know what you will find once you have crossed the threshold.

If you have enjoyed taking this journey with us,
take a look at our Events page for future weekends with the Silent Eye.

20 thoughts on “Rites of Passage: Lurchers, Stags and a mummified cat”