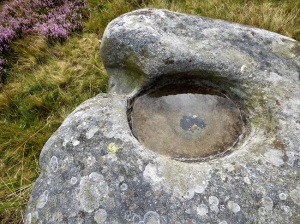 … After many years had passed under many kings,

Merlin the Briton was held famous in the world…

made war on Gwenddoleu of Scotland…

The troops were fighting, falling on

both sides in miserable slaughter…

Merlin had come to war with Peredur and

so too had Rhydderch, king of the Cumbrians.

Three brothers of the prince who had followed him

through all his exploits broke the battle lines.

They rushed fiercely through the crowded ranks

and soon fell, killed. Then, did Merlin grieve…

‘Could injurious fate be so harmful as to take from me

so many and such great companions, whom recently many

O death ever near, which has them in its power

and strikes with its hidden goad

driving out the life from the wretched body!

O glorious youths, who will now stand by my side

in arms, and repel the chieftains who rush to harm me?

Bold young men your audacity has taken your pleasant years from you.

Your broken bodies now roll on the blood strewn ground…’

Merlin called his companions from the battle

and bade them bury the brothers in a richly coloured chapel.

There he bewailed the dead men, rubbing dust in his hair,

tearing and rending his garments…

before a new fury seized him,

and he fled, in secret, to the woods.

– adapted from, The Mystic Life by R J Stewart