It isn’t always what you know that counts… it matters more what you understand well enough to bring it into consciousness. Some of us were to get a graphic example of that as we took a break for lunch in the Derbyshire town of Bakewell.

It is a lovely town, in spite of the inevitable hordes of visitors that flock there ever summer, with one of the best churches, replete with stories, history and mysteries. From the Saxon crosses and Masonic gravestone in the churchyard, to the dragons and the white stag in the stained glass, it has something to discover on every new visit.

We have run a workshop based in Bakewell, explored pretty much every nook and cranny, as well as having spent many a lunch-break on the banks of the river Wye, watching the huge brown trout and the innumerable birds enjoying the swift, shallow waters.

Although we would not have time for a proper visit on this trip, it was the perfect place, midway between sites, for an extended lunch-break that would allow our companions to explore. Arranging to meet at the river, we went our separate ways.

We returned early to the meeting place and, finding all the benches full, Stuart took up a perch on a tree as we waited. As we did so, a tiny old lady, as fragile as a whisper, whipped into a newly vacated spot with surprising alacrity. She must have been in her nineties… frail and almost transparent, yet in spite of the  trolley upon which she leaned, her movements were bird-quick.

And the birds were quick to notice her as she reached into her trolley to take out their lunch. It was obviously a ritual of long standing, as dozens of birds recognised her movements and arrived at her feet, showing no fear at all of either their benefactor or those, like us, who were seated close by.

Wild birds are supposed to be wary of humans, but that fear is a learned behaviour. Birds were around, in one form or another, for millions of years before humans came along and decided that their meat, bones  and their feathers were a useful addition to their hunted supplies. Birds learned to fear us and that fear has been passed down through the generations.

I thought of the Dodo, living safely on its island throughout its evolution. With no predator to teach it to know fear, it was only curious when Man arrived and that was its undoing. In just decades, the Dodo was extinct. Not only does the Dodo provide a graphic illustration of how fear, in its rightful place, can be of service,  it also shows something we all know, but seldom think about… fear has to be learned.

It may be learned through personal experience, or through the cumulative experience of our ancestors, but whether it is a finger burned in a forbidden flame or the genetic memories that preserve us, fear is an acquired and instinctive reaction. Yet these particular birds, used to the constant stream of munching tourists  as a food source, as well as their regular suppliers, like the little old lady, had  learned something other than fear…they have learned to trust.

It cannot have come easily to begin with. You can even spot the newcomers who find safety in the crowd but who are still wary when separated from the flock.  But, with personal experience… getting to know the environment, its gifts and its people, the inborn and instinctive distrust built up over the course of millions of years has been set aside in favour of a newly-learned trust. And, if the birds can do it, so can we. 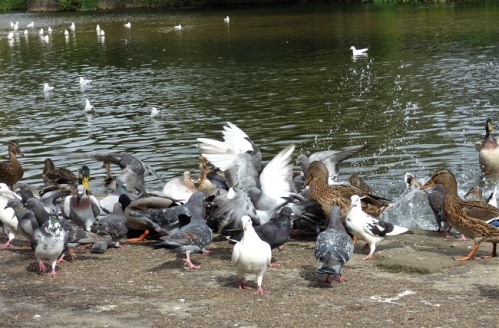 Our own behaviours and reactions are learned, whether from early experience, those who raised us, or from the generations of ancestors who went before. But the world is a rapidly changing place.

Countries we could only dream of seeing, even a generation ago, are now easily accessible as holiday destinations, places to work or are instantly accessible via the internet. Behaviours that served to keep  our distant ancestors safe may no longer serve us, only keep is separate and fearful, creating division and prejudice. Perhaps we too can learn to see beyond fear to trust… and find that, in doing so, we are richer for the change of heart.

It had taken so little to bring this point home. Our little old lady had been there only a few moments, yet she had the joy of feeding the birds and seeing them flock to greet her…and they, through their trust, had been nourished. Their interaction, fleeting though it was, had been beautiful to watch.

As our companions gathered once more by the bridge, I reflected on how simply Nature can teach us…and how easily we can miss her lessons, forgetting, in the hustle and bustle of urban life, that we too are her creatures and part of the vast and intricate dance of life on this planet we call home.

18 thoughts on “Rites of Passage: Familiarity…”