With just over two weeks to go before we set off for the north and the start of the April workshop, things are getting a bit weird. On the one hand, everything is pretty much written, prepared, thought out and sorted. On the other, there is the worry of waiting for last minute props and the little odds and ends to be delivered, thought of, made or bought. It feels as if we have entered quiet waters at last and as if life has become suddenly rather manic, all at the same time.

We are over the main hurdle; the workbook that has been in the works for three years is ready… ideas, reading, research and writing have all come together. But that, though it is by far the most important task, is only the beginning.

I have a love-hate relationship with this point of the year. The excitement is mounting and so is the adrenalin; there is everything still to do and yet all the major things are already in place and can no longer be altered. The workbooks are not only written but printed, the roles attributed…’all’ we have to do now is get there with everything we need…and hope everyone else does too!

My biggest concern at the moment is a plant pot. Not just any plant pot… it is the headdress of a Sumerian god. I have tried so many different ways of creating the right effect, and failed miserably. Until now, at almost the last minute, when a child’s toy seems to have provided the solution.

I did offer to provide the gods with handbags too, but the gentlemen declined for some strange reason.

It is not as if I was joking… the Sumerian gods, kings and priests all seem to have carried them. Although, it must be said, they were probably not intended as functional items of fashionable apparel. The most likely interpretation, like many of the apparently mundane items we are packing, is rather more symbolic. The handle represents the arc of the heavens, or the rainbow, while the square ‘bag’ represents the earth…and together they symbolise the unity of the Cosmos. 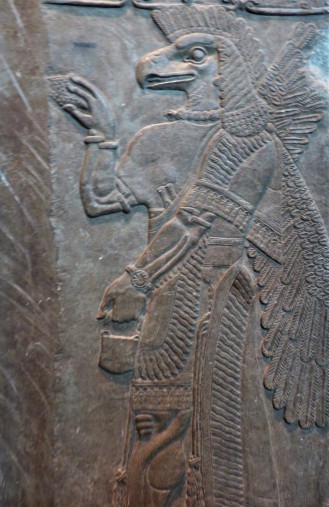 I have barely started packing. I have yet to start rummaging beneath the bed and in the ‘walk in wardrobe’; both are stuffed with bags and boxes, holding the remnants of previous workshops. But the packing list is done… at least, it would be, if I didn’t keep adding to it. There are growing piles of boxes in my bedroom…and yet most of what they contain are very small items.

“The great doesn’t happen through impulse alone, and is a succession of little things that are brought together,” wrote Vincent van Gogh to his brother. A pair of scissors… a pack of drawing pins… a hair tie that won’t be used for hair… It is the little things that can change everything…and those are the easiest things to overlook.

The devil is not in the details… it is in forgetting and overlooking them. From sticky-paper dots to safety pins, our representation of an ancient work of literature will rest on such humble foundations. But is that not always the way?

No matter what we try to achieve, unless we get the simplest, most basic things in place at the beginning, we will hit problems. They may not be insurmountable, but a little attention at the start will make any task easier and more likely to succeed.

27 thoughts on “‘A succession of little things’…”