“Stand still…” I placed the newly-found basis of a godly crown upon his head.

“I am not wearing a plant pot on my head!” To be fair, I should probably have waited until there was nobody else in this section of the garden centre, but we were on a mission. And I needed the right sized plant pot.

“No-one will ever know.” He had little cause for complaint… I’d be wearing one too, seeing as I could not have the glorious golden crown of ancient Sumer. 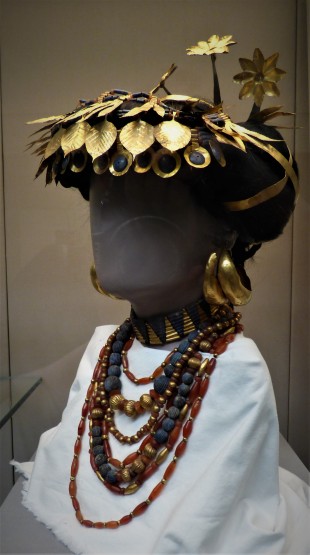 It would be my job to make sure that we did not end up looking like a latter-day Bill and Ben… but a little ingenuity and gold paint should do the trick.

“Well, our ‘Ben’ will be playing Gilgamesh…”

“Wiki says that translates roughly as ‘the ancestor was a young-man.'”

“Or Old-Man-Young.” That is, in itself, and interesting name to ponder. It conjures all kinds of possibilities…

The rituals are written and in the process of being edited, proof-read and polished. The task of assigning roles, creating props and costumes has begun in earnest and April seems to be speeding towards us at a rate of knots.

I love this part of the process. We do not expect those who join us for the weekend to spend a great deal of time and money creating costumes for the characters they will embody during the rituals… but they usually surpass our expectations, and each bit of colour and detail adds to the illusion we create.

That illusion is the ‘window-dressing of the mind’… an aid to the ‘suspension of disbelief’ and a route into the collective imagination. The greater the reality we can suggest through costume, props and music, the easier it becomes to open ourselves to that Greater Reality we hope to touch through these weekend workshops and the Paths each of us follow.

The core members of the group always go the extra mile to create costumes that lend something special to the atmosphere we are seeking to create… and this time, it starts with a pair of humble plant pots. Symbolically, that is actually rather neat. The deepest and most beautiful aspects of the spiritual life and journey are always rooted in the simplest of things.

As we count down to April, some of our spiritual work will involve things as mundane as glue guns, fabric and the creative curiosity of ‘what if?’  as we try to create something beautiful and useful from the scraps and tatters of life.  And that too is symbolic and leads to another question to ponder…

What if you came along and joined us for the weekend…?

‘Gilgamesh is among the greatest things that can ever happen to a person.’
– Rainer Maria Rilke.

The Silent Eye’s Spring workshop for 2019