The last of the winter light was beginning to fade as we left St Andrew’s and wandered out into the churchyard. In many respects, what awaited us outside was far more impressive and interesting than the Georgian interior. There were stones.

It is fair to say that most churchyards have stones of some description, and this one was no exception. Set within the old precinct and ringed with buildings from another era, the green space is a place of peace peopled by memories. A memorial pays tribute to those who served and fell in the great wars, and close by, one grave marks the last resting place of Mary Noble, an old lady who lived to the grand age of a hundred and seven. She was born around the time that Louis XIV, the Sun King of France, finally gave up the ghost. She lived through the years of the French revolution, the reign of Napoleon and his final defeat at Waterloo, seeing the French monarchy temporarily restored under Louis XVIII. Not that she would have cared or known much about such great events, even though they would undoubtedly have played a part in shaping her world. She was a spinner, and continued to spin her threads until three months before her death.

Near Mary’s grave is another that is often passed unseen, marking the resting place of the parents-in-law of the poet, William Wordsworth who, with his sister Dorothy and his future wife, Mary Hutchinson, attended Dame Birkett’s School overlooking the churchyard. Home meant different things for Mary Noble and the poet. One would immortalise the beauty of the area with his words,  the other, born decades before the poet and living a long life after his death, spun the threads that clothed the ordinary people who lived and worked the land. Yet, ultimately, for both of them, home would be cold earth and the hope of heaven.

These, however, were not the stones we had come to see. What we were after were stones that had already been around for over eight hundred years when Mary was born. One, known as the Giant’s Thumb, is a tenth century carved ‘wheelhead’ cross, dated to around 920. Tradition suggests that it may have been erected by Owen, King of Cumbria, as a memorial to his father. At some point it was used as a pillory to punish wrongdoers and the lower holes may have been enlarged for this purpose.

The scheduled monument listing designates the cross as Anglian, and says of the now-weathered decoration that a drawing was made in 1921 that showed, “…the east and west faces to have displayed a decoration of scroll and interlacing with a crucifixion scene on one side depicting Christ flanked by two figures interpreted as Longinus the spearman and Stephaton the sponge bearer. Above Christ there is a serpent. On the opposite side of the stone there was another human figure too weathered to interpret.”

It is always with a sense of privilege that we stand in the presence of a stone that has seen so much history and one which, moreover, still carries the carved mark of an artist. For over eleven hundred years this cross has been part of the life of its community… and yet, it is a mere babe compared to some we would see over the course of the weekend.

Just a few yards away is a much more unusual collection of stones, known as the Giant’s Grave. On face value, the group of six stones is no more than a pair of Anglian Crosses with four Viking hogbacks, the carved stones used to mark Norse burials, and yet, uniquely, it is said to be a single grave.

The earliest hogbacks date back to around 920, like the cross of the Giant’s Thumb. They are usually carved with a pattern that looks like roof tiles and are thought to be a stylised representation of a house for the dead. Many are covered with patterns alone, often flowing and sinuous in a style wrongly named ‘Celtic’. Others are also carved with legendary and religious figures…not all of them Christian. Many such stones are beasts in themselves, others are carved with people, boars…and dragons.

The two cross shafts, of a similar date, are also carved, though they are badly weathered.  The interlacing is different on every stone and we have wondered if there is meaning to each pattern… a meaning  to which we have lost the keys. Curiously, given that we had not yet finalised the details of the weekend at that time, and never announced them, writer Mary Smith sent me, as well as the photo of Merlin’s cave, a newspaper cutting that discussed the lost language of symbolism and a booklet on the old carved crosses. ‘Coincidences’ like that tend to reassure you that you are on the right track…

Legends say that the Giant’s Grave is the resting place of Owen Caesarius, king of Cumbria between 920 and 937 AD:

“The common vulgar report is that one Ewen or Owen Cæsarius, a very extraordinary person, famous in these parts for hunting and fighting, about fourteen hundred years ago, whom no hand but that off death could overcome, lies buried in this place. His stature, as the story says, was prodigious beyond that of the Patagonians, in South America, seventeen feet high, that the pillars at his head and feet denote it, and the four rough unpolished stones, betwixt, represent so many wild boars, which had the honour to be killed by this wonderful giant”. Todd.

Some say the Grave is the burial place of the mythical giant Sir Ewan, who lived in the Giant’s Caves on the banks of the river Eamont near Penrith. One old record says that the Grave, ““was opened when I was a Scollar there, by William Turner, and there found the great long shank bones and other bones of a man, and a broad Sword besides.”

Yet others link the grave with Owain, also known as Ywain, or Yvain who was the son of Urien, King of Rheged… and thus to the legends of King Arthur. Owain was, in the later Arthurian Romances, known as the Knight of the Lion and a Knight of the Round Table, and tales were penned about his exploits of knight-errantry. The most famous episode tells of how he rescues a lion who becomes his companion… and helps him defeat both a giant and…a dragon. 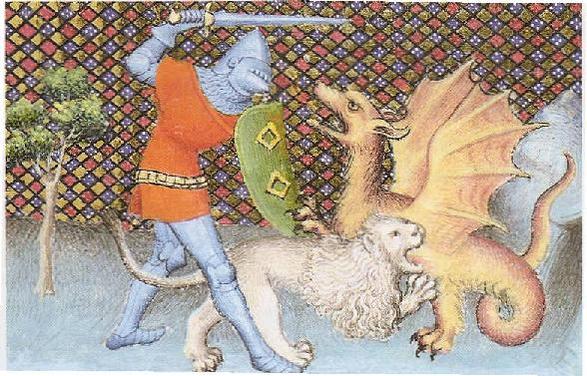 Without realising all these details when we had planned the weekend, they were beginning to make themselves felt as gifts, joining the dots of what we had planned. Another gift awaited us too,  beyond the sundial where the ley line passes through the churchyard. A peace garden was to be our final official visit of the day. Created in1971 by the local Rotary Club, its wheel-like motif and their motto, ‘Service above Self’, were perfect for a shared dedication to the work of the weekend, which would continue the next morning with a visit to King Arthur’s Round Table…

17 thoughts on “Full Circle: Giants in the churchyard”